It was a humid day today, but maybe that was me. But when walking around Hoboken I saw people that weren’t bundled up, in fact I was relatively overdressed. A bit sweaty when I came home. I didn’t mind, it wasn’t raining and the temperature has been predicted to drop quite a bit.

I don’t recall it starting at 9:00, maybe it started at 8:00. I DJ’d it a few times, Steve Fallon would make a run and brings back dozens of White Castle burgers. An occasional pot luck and an open bar with 2 irregular regulars behind the bar, one a high school teacher and the other part of the scene at the Elysian Cafe down the block.

It was always a good time, drinks flowing, people running upstairs to various apartments to sniff or smoke various things that couldn’t be done in public. Nobody got hurt, no fist fights, just a general good time.

The first time I went I did feel privileged to be there and had Rand as my guest. One time his sister showed up after seeing him and Rand had to tell her she couldn’t stay, she wasn’t invited. That was how exclusive it was, if exclusive was the right word.

Mainly it was all about the love for Steve Fallon and his family, from the workers and regulars. Last night it was a different scene, quite crowded and no open bar. That was a shocker. I had a couple of singles for tips but not enough for an actual drink, thinking that it would be a freebie.

I met up with Chris and we strolled up. Once inside, I saw Rand & Lisa chatting and it was crazy crowded in the front room as a two man band played some funk and soul classics. It was fun for me but for others it’s was the same bloody thing they’ve had the past four years.

I saw Roda and he is much loved there, or at least he was last night with various people among his co-workers saying and slurring how much they loved him. He is a loveable guy. I tried to get a Guinness but couldn’t get served though most everyone else around me at the bar seemed to have no problem.

I decided to leave, perhaps vanish and no one would notice, I hoped. But the coat rack was laden with winter coats and I couldn’t find my navy pea coat on a rack, mixed in with other coats, much the same color.

After about 10 minutes of searching, Lisa and Chris both saw what I was doing and asked where I was going. I said I was going to the ATM to get some cash and they both said forget about it, they’d buy me a beer.

So I stayed and had a beer. I was swept into the backroom where a DJ was playing some old and obscure 45’s of soul and garage songs. Lisa was on the floor dancing and Rand and I were holding up the wall when Chris grabbed me by the arm and soon had me dancing on the floor.

It was fun, Rand & Lisa, me & Chris, Todd Abramson and his wife, Gaylord Fields and his wife, and quite a few others all doing whatever frugs or watusi’s or foot stomping required. I wished it was Madison Time myself.

I was quite sweaty by then. Went out for a smoke with Roda and should have worn my coat, but got over it. More dancing in the front room to the two man band playing Brick House by the Commodores and Give It To Me Baby by Rick James.

It went on like that for a while. Finally Roda got me and asked if I wanted to take a walk so walk we did. A good walk, a bit gossipy and a bit fan boy, talking about the Dark Knight movie and how good it was. Also how McSwells had changed from people that showered daily (when I worked there) to guys that proudly did not.

Heard about one guy who used to be quite friendly, and no longer around in NJ, out west somewhere who treated Roda like crap, enough so that Roda had to threaten to belt him just to get out of his face.

Yep, Maxwells had changed into McSwells and apparently I got out at just the right time. And so did Steve Fallon. Who would want to deal with the ABC, the Health Inspector, taxes, Hoboken politics and various bands? After almost 20 years, that would be enough.

Still times being the way they are lately, if offered a job there I’d probably take it. But that won’t happen since Todd doesn’t like me very much. 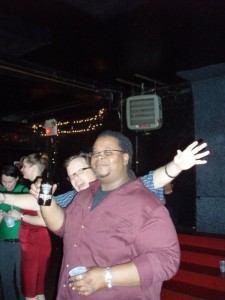 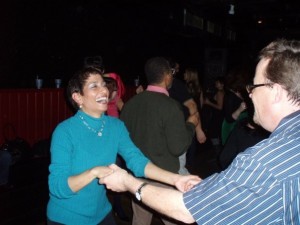 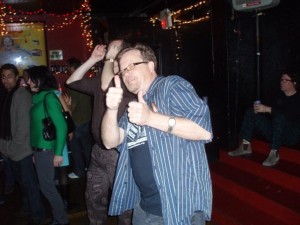 Getting my groove on, thumbs aloft! Rand's forearms! Photo by Lisa