Just had a nap. A little longer than I hoped. I asked Bill to give me a call when he was leaving the office but I don’t think he did. So instead of waking up at 5:30, I woke up at 6:45. Not so bad.

Today has been a day of wearing a suit and tie and pounding the pavement. Got up at 7:45 this morning for an interview at 11:00 at the Time Warner Center at Columbus Circle. I puttered around this morning, having coffee.

Even watched the Today show, grateful that Matt Lauer was nowhere to be seen. After showering I trimmed my goatee a bit, it was looking a little weedy. Had breakfast, and checked my emails and at 9:30 headed out to catch the bus.

Same types of people waiting for the bus, of course none of them put out their hands to signal the driver to stop, so I did and the bus stopped where I stood. I was surprised they had an easy pay machine like they have at certain stores next to the fare box. My how things change within a few months.

I was early enough and wandered around the Time Warner Center which is basically a high end shopping mall under an office building. Spoke to Bill who told me to break a leg. He also called the interview, an audition.

I got to the office building, showed my ID at the lobby desk then instructed to a room off to the side to have my shoulder bag scanned in an x-ray machine. Then I rode up to some very nice offices.

The company I was interviewing with is a screening company, meaning they see me first then recommend me to the actual company. And if I pass the background check, which I should, then there should be no problem.

It’s all up to the company. Not naming the company right now on this blog, but they did receive bail out money and are no longer an investment bank, they’re an actual bank thanks to the Federal Reserve. The original job I applied for was an office manager but since I only oversaw 20 people and not the 150 plus they had hoped for, a receptionist position was suggested and I readily agreed.

Can’t be too choosy.

The first person I met, Barbara was very nice and of course I was all about the eye contact. Wisely I took a Xanax before the interview so any edginess was gone. The interview went well, Barbara telling me that that the company had 5 offices in Manhattan which were going to be consolidated into one building and that they also had an office in Jersey City which will remain.

I told her getting into Manhattan was no big deal and that the Jersey City office would be within walking distance. She didn’t know that Hoboken and Jersey City were right next to each other. I even asked pertinent questions afterward.

I usually draw a blank at that and wind up saying, in an attempt to compliment them by saying they had answered all my questions during the interview. Barbara went to see if someone named Nick would be available to see me and I sat in a very nice conference room overlooking Columbus Circle and Central Park.

Nick came in and I resumed eye contact, answering all his questions and hopefully making a good impression. It was over soon enough and I’d like to think I made a good impression and that it went well. If I get the job I would start right away.

I went outside, called Bill and told him and of course, Bill was quite supportive. Since I was in the city I decided to walk around a bit.

Even though I knew Paul McCartney was probably in England, I walked by Eastman and Eastman. You never know, right. But no Macca was to be seen. I then walked over to 65 east 55th Street and gave a former co-worker Vinnie a call.

Vinnie was going to lunch and came down a few minute early. It was great to see him, he and his family are doing well. It was good to see Vinnie. I put him down as a reference and gave him the heads up. He was soon headed to lunch with his colleagues and I was on my way. I decided to walk over to my former job to see Greg Stevens.

I wasn’t sure if he was in but he was. Since the company he worked for is in Los Angeles, they don’t get into their offices until 9:00PST so he now comes into his office around noon.

Once again he was having some problems with the computer and I was able to help him out, once again telling him to step away from his computer so I could sit at his desk and do a few things like close some tabs on his browser which might have been slowing things down.

He’s a good guy. He may need my help next month when he leaves the former office and moves to a smaller space. Also saw some other people, the other tenants in the office. They were happy to see me, remarking that it looked like I lost some weight.

I’m sure I did, don’t know how much I lost but looking at the picture I posted last night of Bill and myself protesting in Times Square last weekend I really do look a bit thinner. Even the shirt I wore today, sized 17.5/35 was not as snug around the neck as it used to be.

That’s a good thing. Walked down to the Path train, following my old route and read the November 2 issue of the New Yorker. That’s how far behind I am.

I’d really like a job, if only to catch up with the New Yorker. 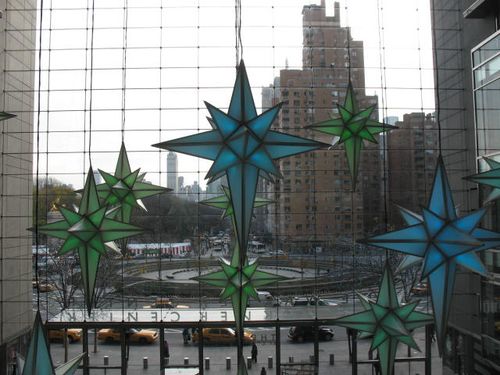