Well I hope this finds this in good health and safe wherever you you are. I’m pretty lazy right now, but here am, writing this on the birthday of Jesus of Nazareth. Possibly a good guy, just getting through the people around him would be a chore.

In any event, on this day of Solstice celebration and what have you, I found myself wondering, was Jesus delivered by a midwife? I mean when you look at, where any of the other participants qualified or even able to deliver a baby?

And with living under Hebraic law, would the messy parts of a woman’s vagina, even Mary’s, be an abomination in their god’s eyes?Yes that was one of the thoughts that floated through my over stuffed mind and belly.

No shame in going back for seconds, or eating just about everything on the table. Last night and this afternoon I ate least had seconds of most everything. Not a gavone but the potential was there. Bill and I arrived in Hillsdale where we promptly sat down and had dinner.

Brian and Karen and Cassie with Hillary and her beau Chris were quite hungry and caution was thrown to the wind regarding the Garfield contingent having had dinner. I hadn’t had homemade lasagne in a while and it was quite good. Even though I rarely eat sausage I indulged myself much to my liking.

That’s where the second helpings came in. Gifts exchanged, everyone satisfied and happy. Ride back to Hoboken where Bill and I exchanged gifts. A few ties and cufflinks from me collected over the year and an excellent electric pickup for my Fender acoustic.

All very nice and pleasant. Bedtime for both of us and I woke up first this morning to see if there were any presents under the tree from Santa, but then I realized we don’t have a tree. No room for it anyway. No tree, no gifts, but that was OK.

Went in the kitchen to make some coffee, and turned on the heater. No heater again. It went out last month on the 25th and now it’s out again. I made an online appointment for the PSE&G maintenance for tomorrow morning between 8AM and 12PM.

That’s fine with me, they’re generally show up in that time frame. Like around 11:55AM.I hope they won’t charge. Last month it took about 5 minutes and there was no charge, so I hope it will be the same situation.

Right now, we got a big pot of water on the stove, getting things warm and damp, but it beats being cold.

This afternoon we had the trip to Garfield to Frank and Elaine’s house. Nice and mellow there, Elaine’s dad on the couch watching everyone have a turn playing Wii which they got for a Christmas present. Corinne, Meg & Rob and I tried my hand at boxing and bowling as did everyone else. More food and gifts and then we were back on the road to Hoboken since the Zipcar needed to be returned by 5PM.

We are now watching the Stephen Colbert Christmas Special. It was originally broadcast last year but I remarkably had some foresight to check it out at the library a week or so ago. Hey, you snooze you lose.

We just watched Iron Man which Bill hadn’t seen. After catching bits and pieces of A Christmas Story, it was fun to point Peter Billingsley in his cameo in Iron Man. So that about sums up Christmas 2009. See ya tomorrow. Happy Crimble! 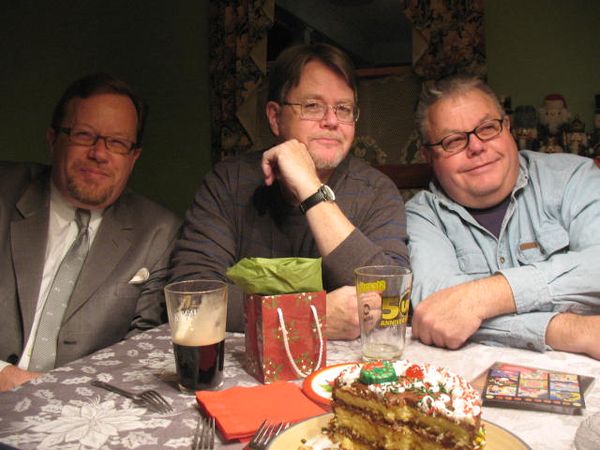