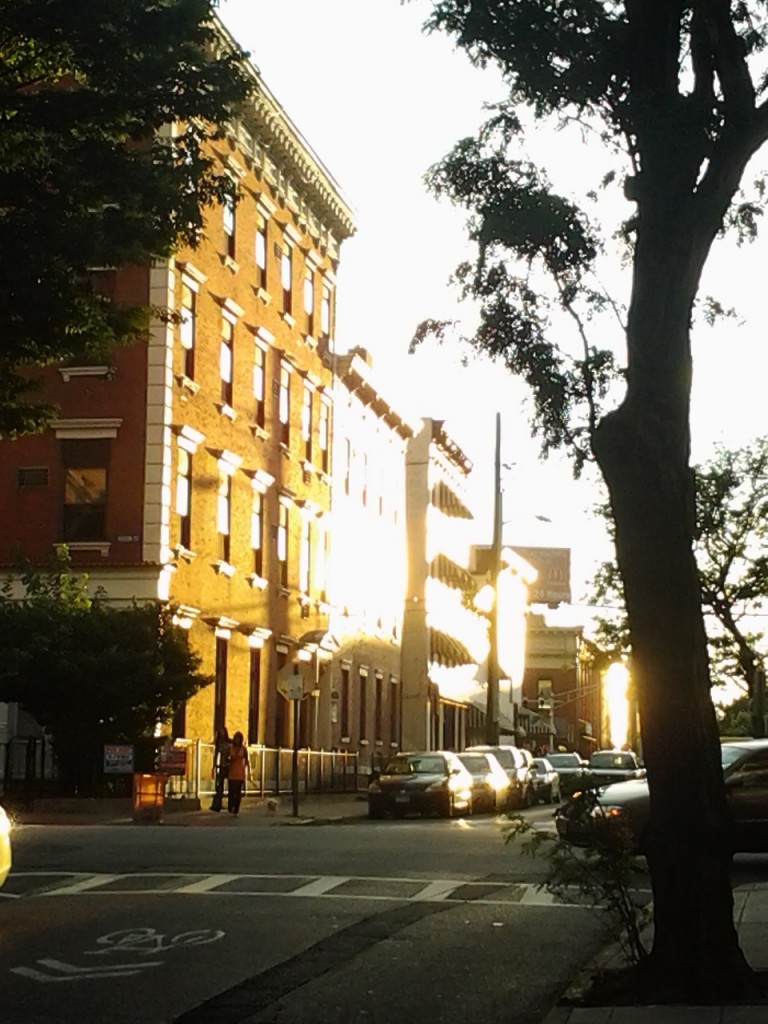 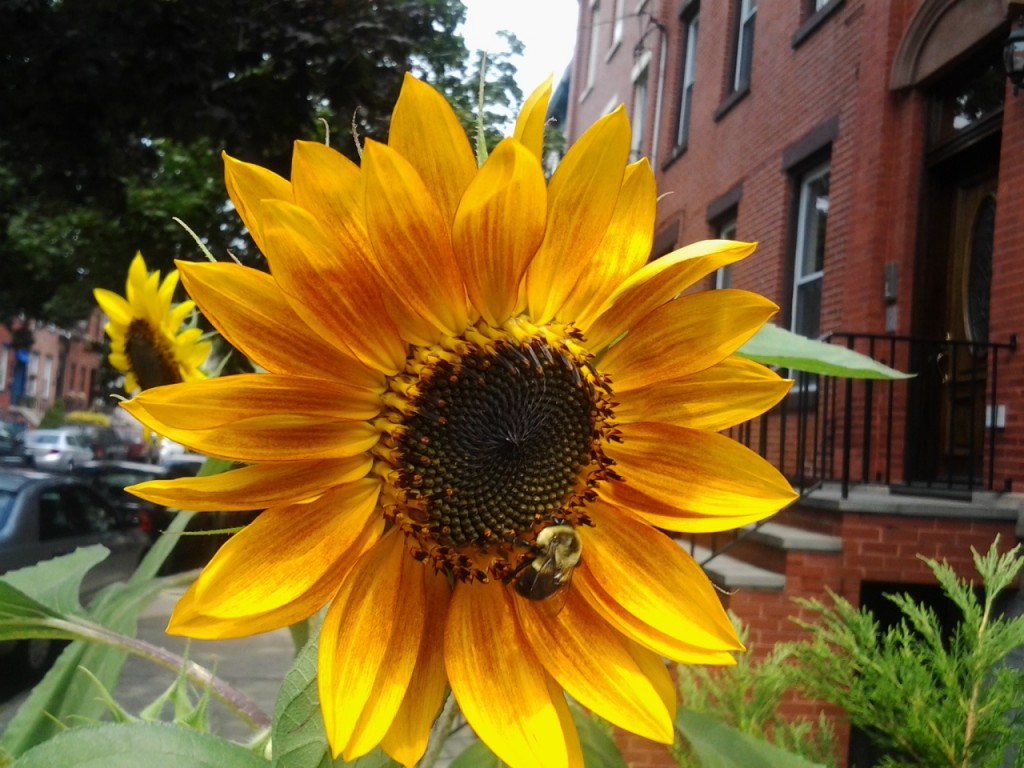 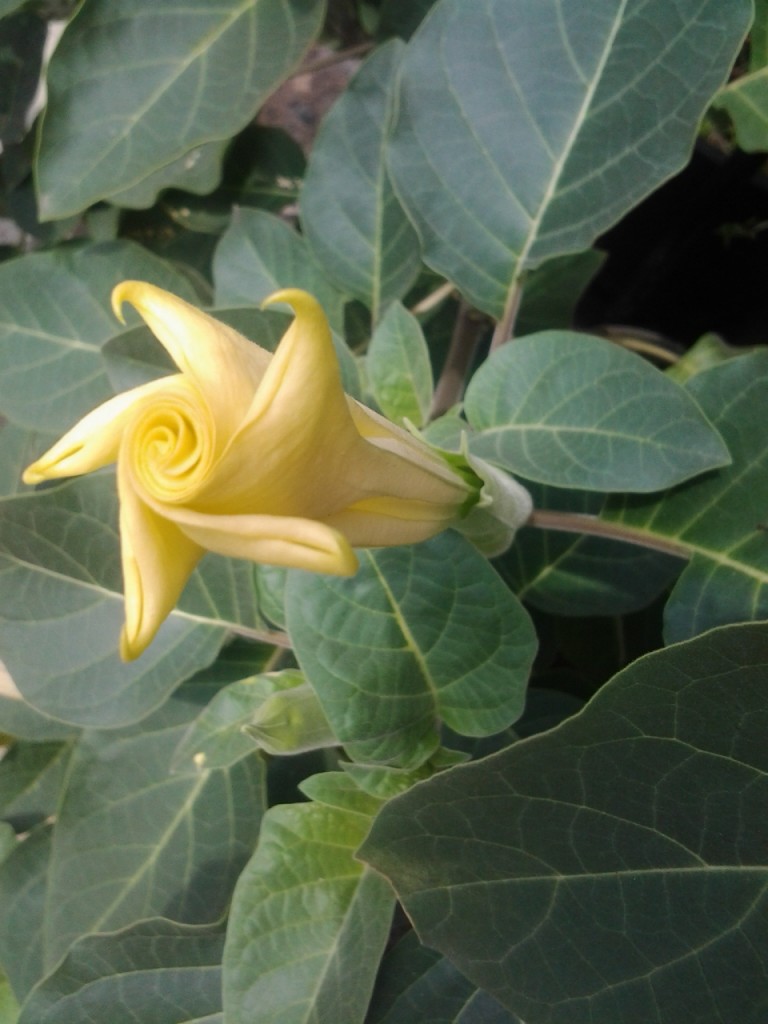 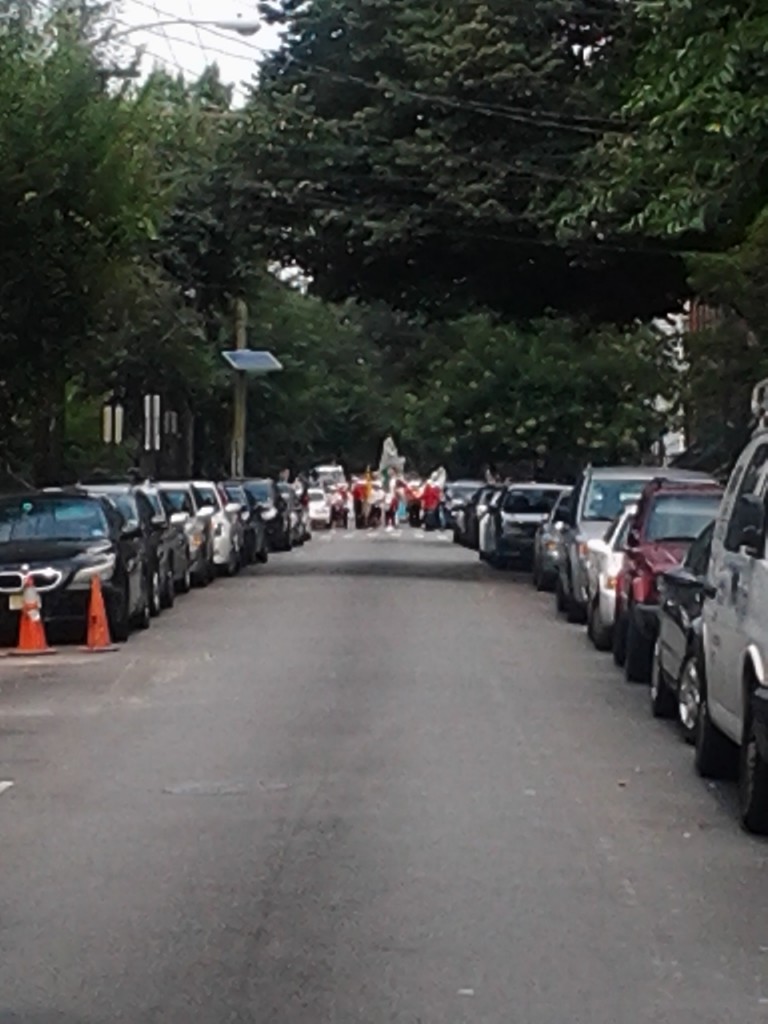 Ah, I just had a nap. Nothing spectacular, just a nap for about an hour. A few miles away from here, the meadowlands are on fire. There hasn’t been much rain in this region lately so brush fires have been happening for the past week or so. Hoboken doesn’t seem to be in any danger.

Yesterday was a work day, after a day off on Monday. It was full staff which made for some difficulty sales wise. I came in second behind Jerry Vale so that wasn’t so bad. It was a long day, made longer by a staff meeting which promised to be short, but really wasn’t.

Many things were covered in the staff meeting led by Zack and Bradley. And also performance reviews were handed out. I can’t speak for anyone else but of course it was mentioned there was room for improvement. My emotions do get in the way and affect the atmosphere of the store which is true. I have to do better at concealing how I feel. I suppose that is where Xanax would come in. But since I don’t use that too often I generally wing it. Sometimes it works and sometimes it doesn’t.

I was a bit anxious anyhow since the great and wonderful Steve Fallon was in town and I did not want to miss him. A whole slew of old faces promised to make an appearance to wish Steve a happy birthday and good old Rand kept me abreast of what’s what and who was there.

After the meeting I hot footed it to the subway and caught a train to the bus terminal. And since it was after 10:00, I had to catch a bus on the third floor. It wasn’t so bad, only a short wait of about 10 minutes.

The bus ride was fast enough and I got off at 12th Street after listening to See No Evil by Television. I walked into Maxwells where See No Evil was playing on the jukebox. I saw Rand and Lisa, Mike Cecchini and Sarah Baker (so that’s her last name!). I was offered a drink but wanted to eat something since I hadn’t eaten since 3:00 in the afternoon and now it was past 11:00.

I nabbed a seat by the jukebox where Rand was entertaining with his gimlets. I ordered a bar pie and had a pint of Stella. I ran into Christine and Alirio who were quite happy. Alirio is a sweetheart and also went to Maxwells a lot in the past, but never really spoke to anyone. Now thanks to Facebook he is known to everyone and quite chatty.

Also in attendance was Chaz who had his birthday last week, as well as Butch who I totally forgot about from back in the day. Sure enough up walked Steve Fallon, a bit grayer than he used to be with some longer hair than he used to have. He was great as usual and we had a nice hug and kiss. All these years later he still looks out for me somewhat and will always have my eternal gratitude and friendship. Steve’s partner Arnold was also there and I hadn’t seen him since the 1990’s. Great to see him as well.

It was one of those nights where every time you turned around you saw someone you hadn’t seen in years.

Ira Kaplan and Georgia Hubley, Emily Hubley, Glenn Morrow, Michael Hill , Christine Repella, the lovely Suzanne, Julie Panebianco, were all spotted and kissed and hugged. I found myself talking to someone then excusing myself for a moment to say hello to yet another friend passing by. Quick catching up, and then it was back to whomever it was I was talking to.

Sadly I was too late to see Patti Quinn. She left a few minutes before I got there, had to go home and deal with her kids which is totally understandable. Rand did send me a picture of Patti and Lisa which was quite nice and both women looked great in the photo, which was in 3D, though only visible in 3D on Rand’s camera.

Drinks were had by everyone and none of the nonsense that occurred in the past seemed to be going on which was quite nice. I said hello to Mike Mills and clinked pint glasses with him since he was standing next to where I was sitting. Peter Buck was there as well and I didn’t see Steve Wynn, but Suzanne told me they covered a Dream Syndicate song in the back room, Tell Me When It’s Over. I think Rand, Lisa and I left Maxwells around 1:30, walking home and being a bit noisy.

Rand insisted on walking me to the corner near my house which was awfully kind, even though Lisa did have to work today. He was three sheets to the wind and Lisa wasn’t so I can only guess it wasn’t that difficult for her to start her day. I was invited to visit Steve and Arnold at their house and certainly hope to work something out somehow. It really was great to see all these old friends and faces and it was special seeing Steve, and seeing the love that so many people have for him.

Some people didn’t know Steve was going to be in town even though he did announce it on Facebook which made for a lot of interest. I came home and posted the pictures I had taken and put on Facebook which when I woke up had many likes and comments on all of them. All the good parties have to end and last night ended on quite a nice note.

I slept fairly well, I wasn’t drunk just buzzed. Bill kissed me goodbye once again and I slept until 9:00 this morning when the workers in the apartment below ours started hammering and drilling. Not the way I wanted to wake up but still it wasn’t so bad. A shower and some coffee and a trip to the supermarket was in order. I did see Isis and asked about how she was doing, and she was doing fine.

I walked around Hoboken and stopped by the Guitar Bar where I gave Mr. Wonderful Jim Mastro a tin of Winston Churchill Spitfires. A mini cigar, and a way for saying thanks for accepting my packages. He was most appreciative and told me he was taking daughter Ruby to see Pulp at Radio City Music Hall. He was also at Maxwells last night but oddly enough we didn’t see each other. He was in the back room where I was mainly in the front room.

It was a cool day in Hoboken so I didn’t stay out too long. Came home and chatted with some friends online and posted comments to friends’ comments with regards to my pictures. Then I had a nice nap which brings me to where I began at the top of this entry. 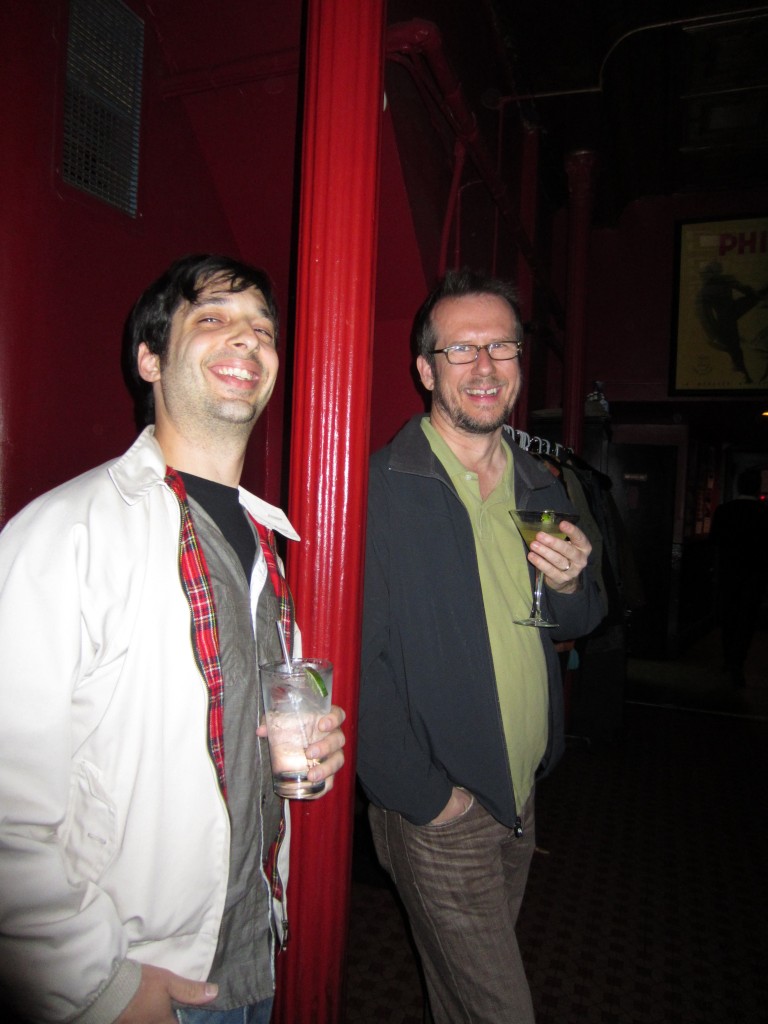 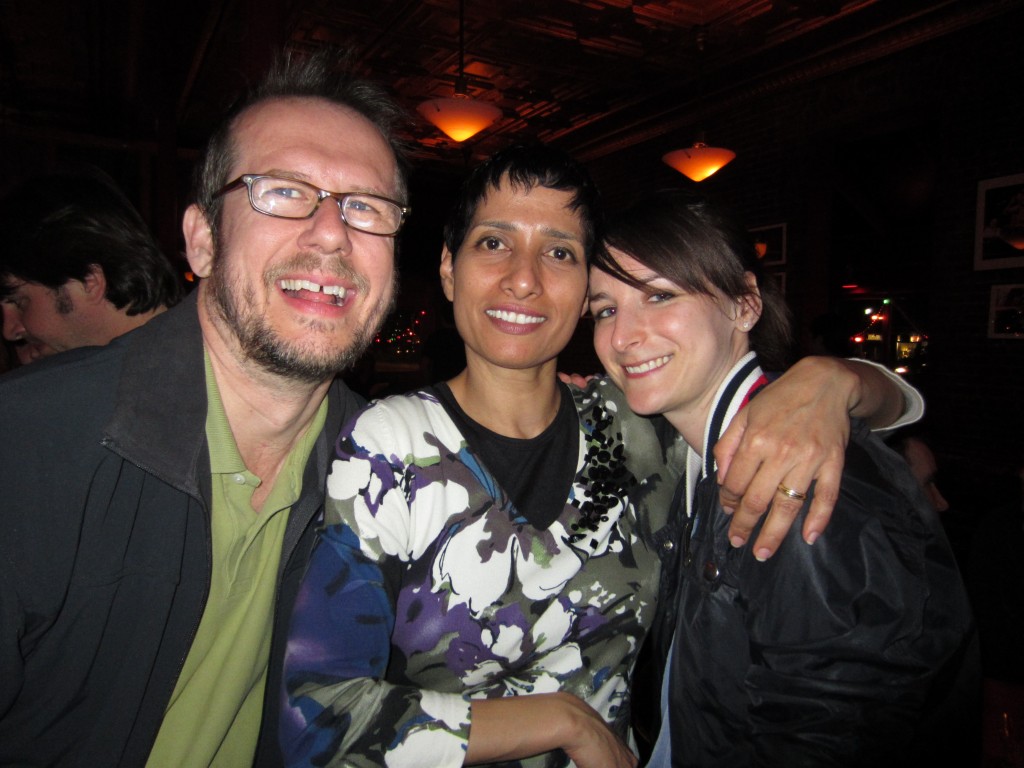 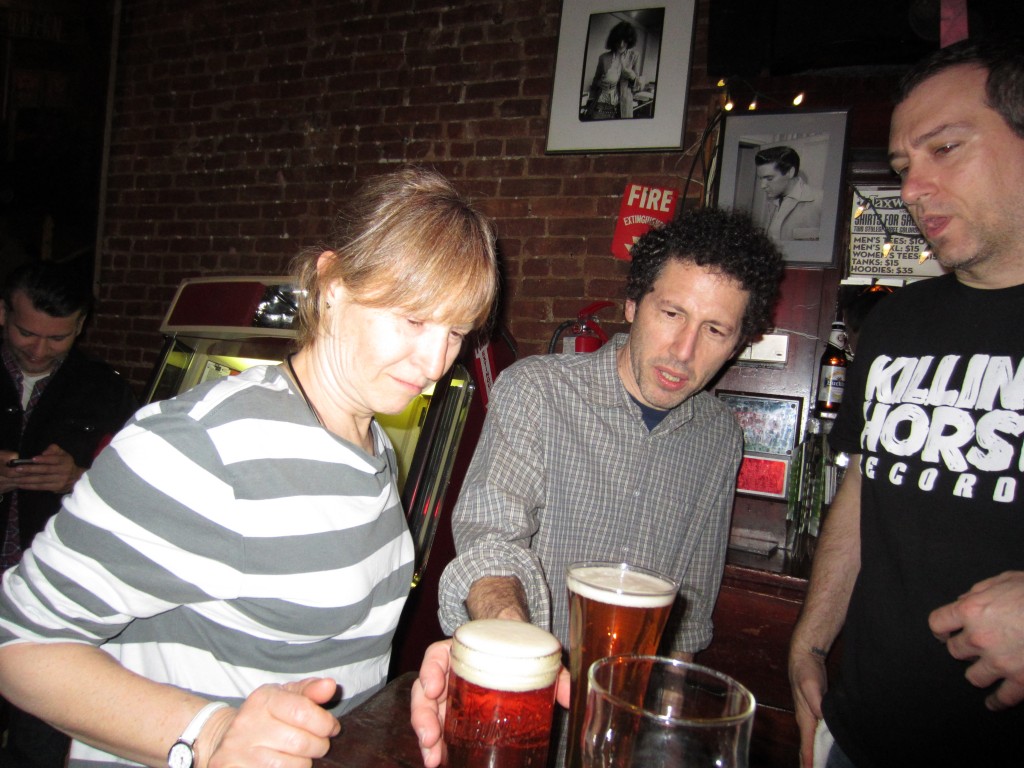 Georgia & Ira and Karl the bartender 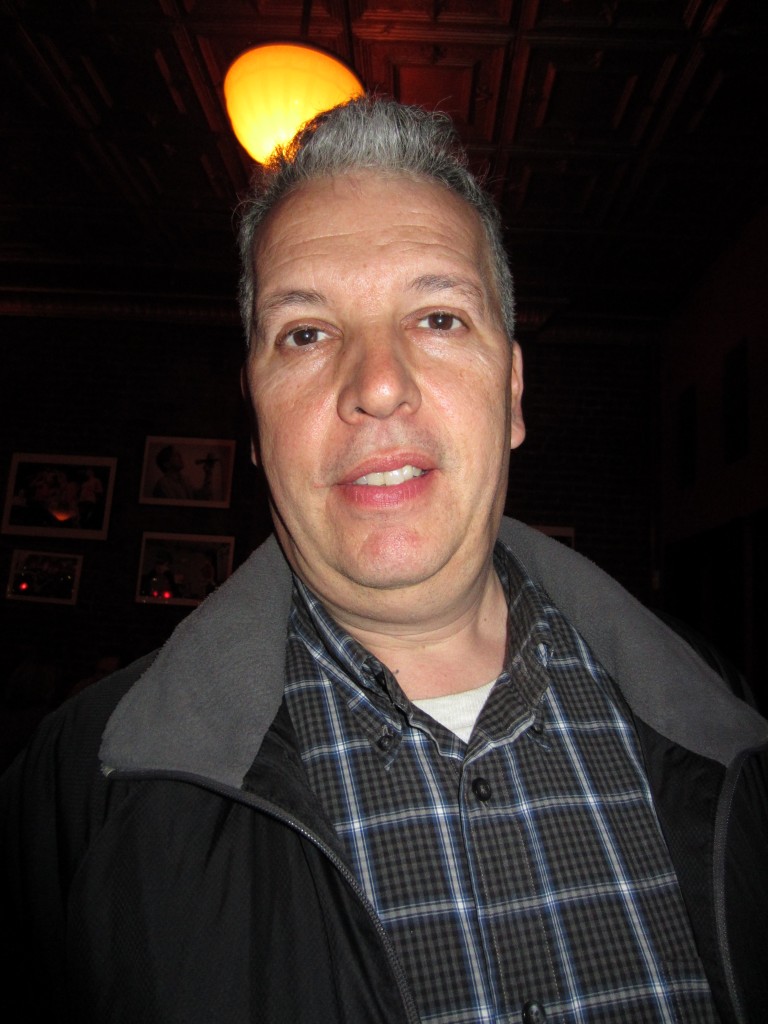 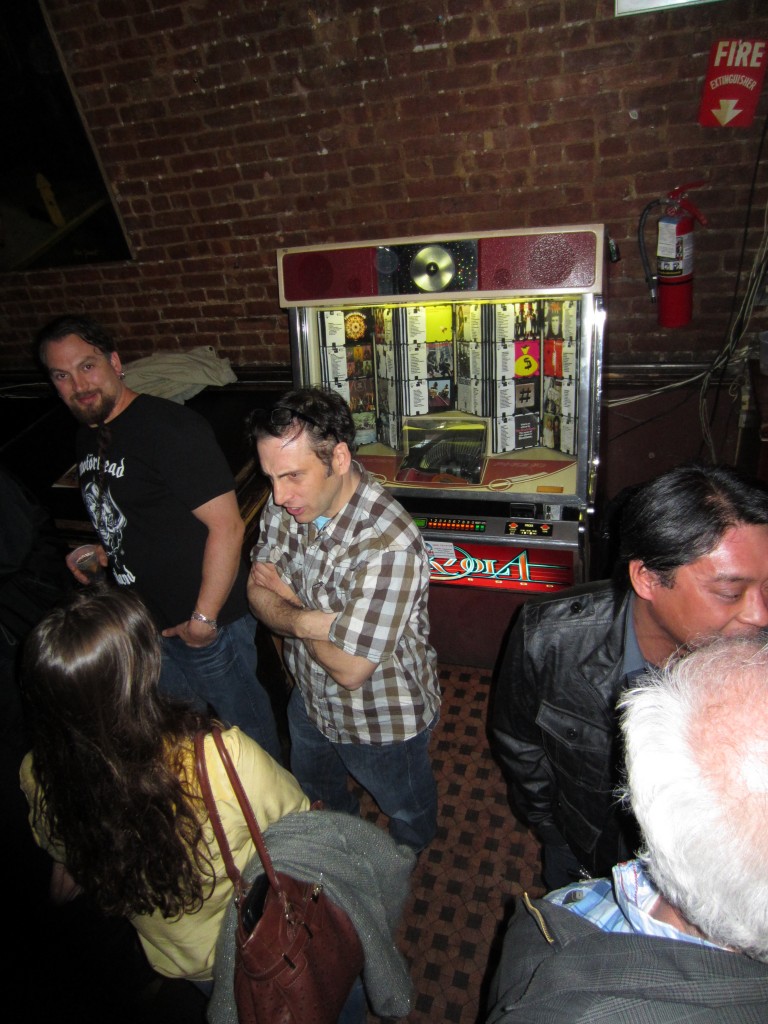 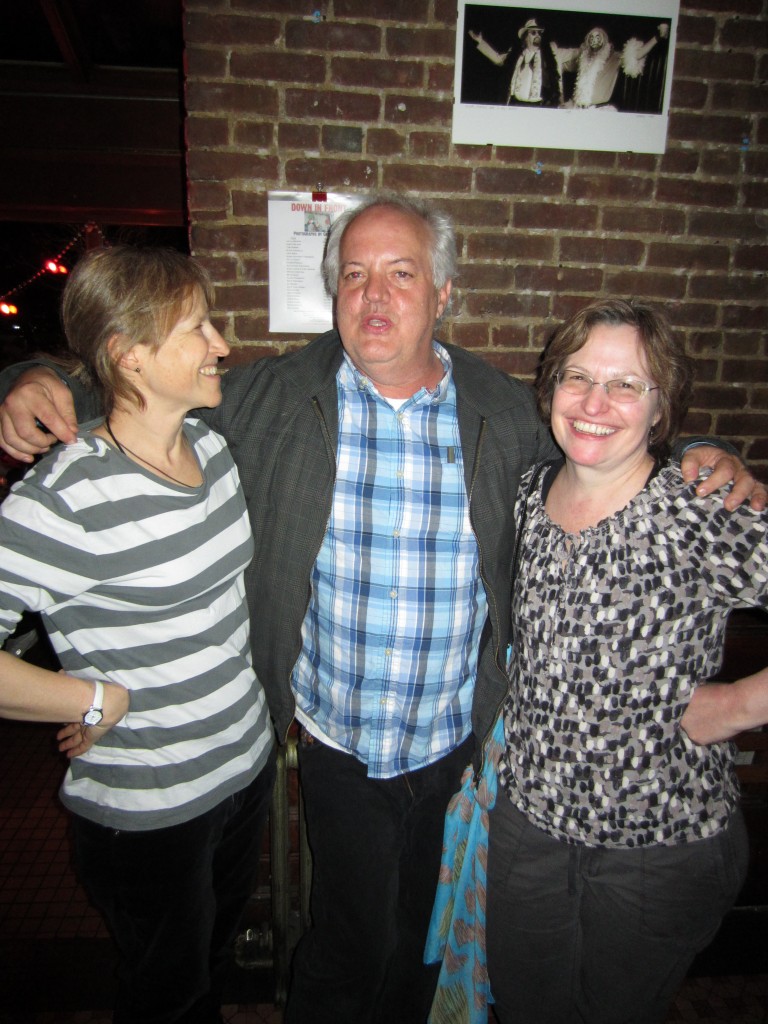 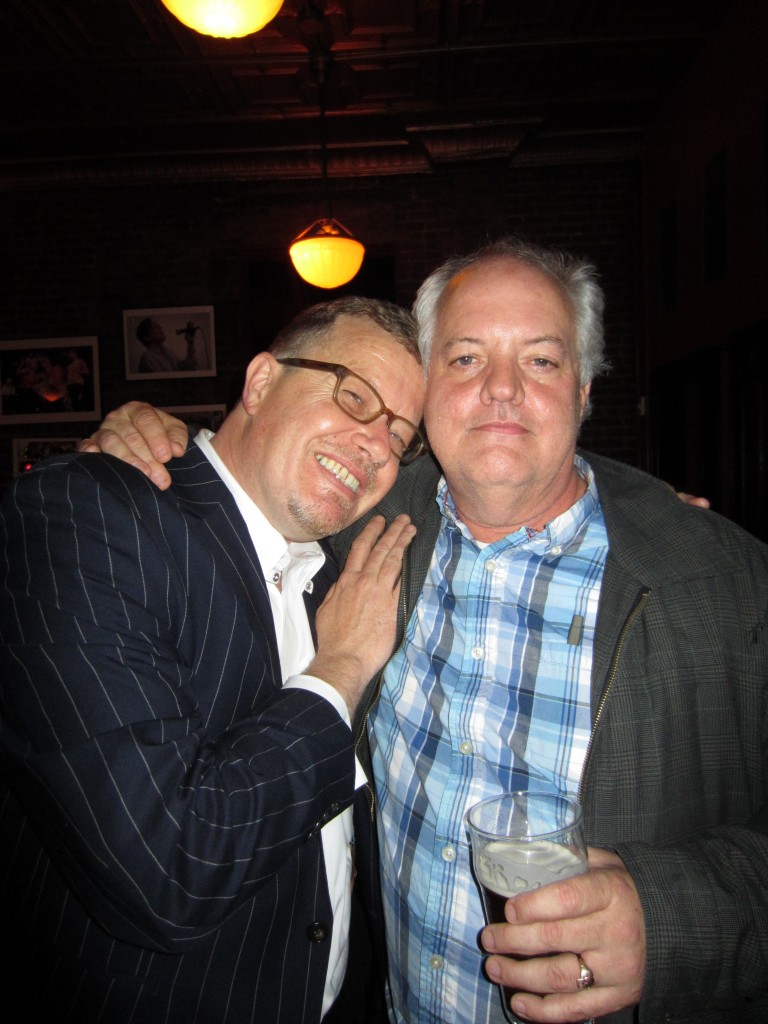 Me & my dear friend, Steve Fallon 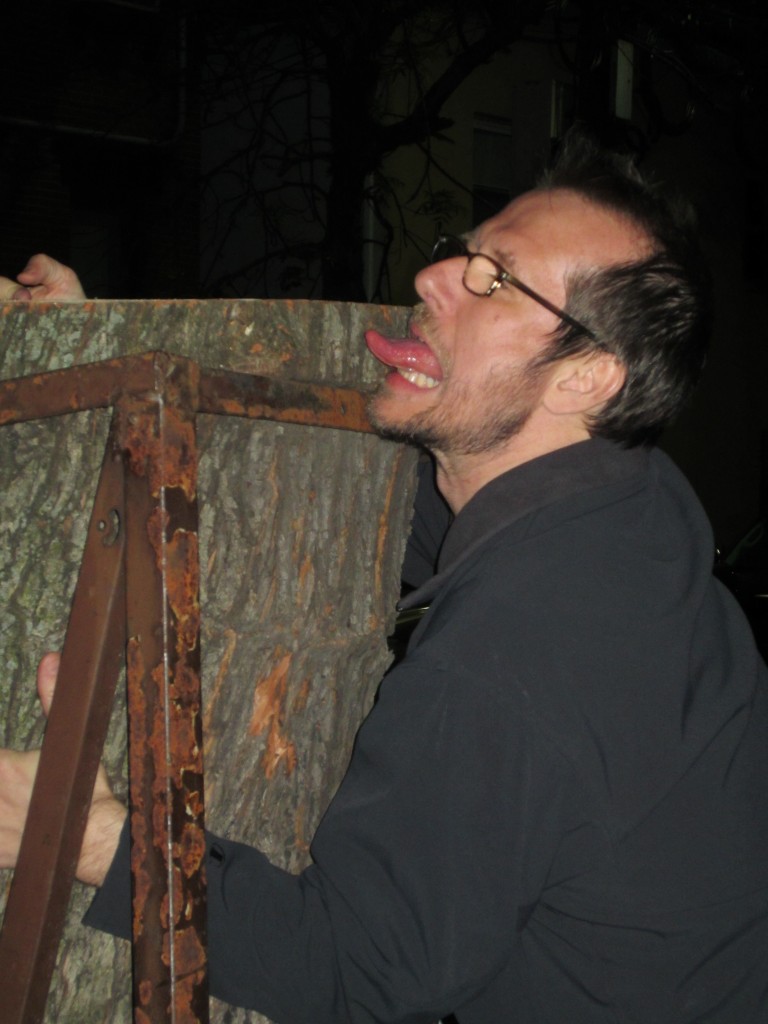 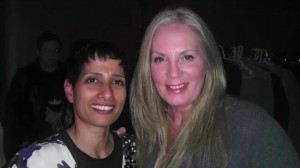 05 Brushfire In Hoboken
A lot of love was had by all.