It’s Friday. Left work early today, things were slow, half the office was out on holiday. Just woke up from a nap. I had a dream that I was living in a house on the border of Hoboken and Weehawken, by the overpasses on Park and Willow Avenues. At one point in the dream I was riding my bicycle, then all of a sudden I was riding my skateboard, the orange Bigfoot skateboard that Annemarie gave me 31 years ago. I was better on the skateboard in the dream than I was in real life. A lot of people had gathered in the middle of the street watching someone named Peter in a fist fight with a small person, actually a midget. From the point of view I was at, looking up at the overpass, all I could see was Peter swinging wildly. I skated past a growing mob and headed towards a party where there was a DJ spinning records by my house. Some spreading puddles of greenish water encroaching. Then I woke up.

Today was truly a bittersweet day. Billie heads back to Washington DC tomorrow after training up in New York for six weeks. It was originally supposed to be for two weeks then three which was bumped up to six. It was great to have him around for so long. He certainly enjoyed Bill and my company and we definitely enjoyed his. I stopped by to see him for a bit this morning at his store, but the street was closed off for yet another steam pipe breaking. Not as bad as the steam pipe explosion last month, but unnerving nonetheless.

I had burned a few cd’s for him, including the Corinne Bailey Rae that Annemarie had burned for me. I think Corinne Bailey Rae will be the soundtrack for a bittersweet summer this year. I told Billie that it felt like summer was over when Annemarie, Rex and Earl went back to Arcata in July, but that having Billie around seemed like an extension of that feeling. Now that Billie is heading back home, that feeling of summer ending has returned. I offered to meet up with Billie tomorrow to see him off at the train station and it seemed like a good idea.

After I left work for the day I stopped by again to touch base, and Billie said it probably wouldn’t be a good idea since he would probably wind up crying at the station. Billie also said that the crew he was leaving in New York had been saying their goodbyes and it was making him emotional. We stood there and talked for a bit when I felt my bladder inching up towards my eyes. Billie was right in the fact that there would be two queens crying in the middle of Penn Station tomorrow, so we would be better off if I didn’t see him off. I’ve had many teary farewells at boarding gates in the past, one more wouldn’t be so bad, but I’ll respect his wishes. Maybe.

As I was napping, Bill called. The WNBA game is off tonight since Bill’s father isn’t doing so well. There were some problems this morning and Bill called me, telling me they were going to go to the stroke unit at Bellevue at the paramedic’s suggestion. If there isn’t a stroke then they will take him to the Veterans Administration hospital on 23rd street. Bill’s father is 83.

On a lighter note, speaking of being 83 as I was walking through Bryant Park this morning I noticed that the Mike Love and Bruce Johnston version of The Beach Boys were putting on a show for Good Morning America. Didn’t see the Cowsill that was supposed to be playing with them but here’s some snap shots illegaldress.

some security looking like his head is in Mike Love’s crotch. 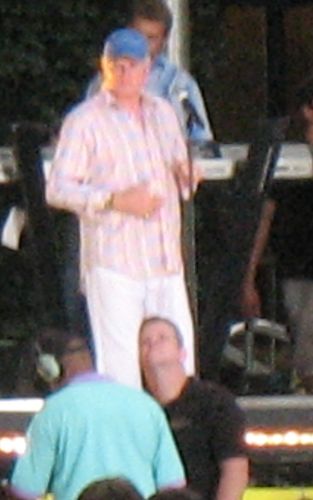 If given a choice I would have chosen Bruce Johnston. 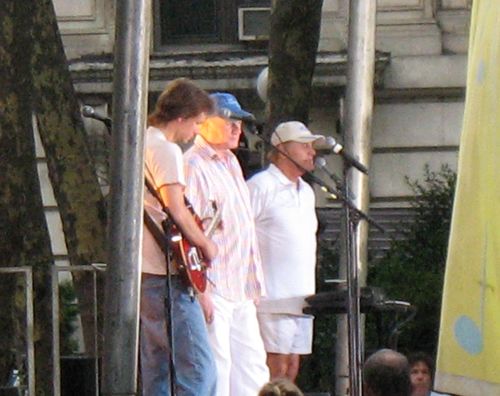 and here is a clip from a few years ago, the finale of Six Feet Under which added to today being bittersweet.