It’s another Tuesday. No big deal. Another day of the clock crawling at work. Not much for me to do. Well the things I did today was open and distribute some mail, give Greg Stevens my own key card to get in and out since he left his at the airport last week, so I go in through the back door.

Also I answer the door bell and occasionally try to find whomever ordered food, even if it’s in the middle of my lunch.

I gave up after yelling ‘Who ordered Chinese food?’ and dialing the phone number on the bill which gave me voice mail. Since no one answered my phone call or responded to my yelling I sent the guy away only to find the food was ordered by one of the conservative doofai.

If it was a test to see if I could work with these idiots, then I probably failed.

There is just very little to do for me lately, Greg Stevens mentioned a fear of his that Vivek is going to fly the coop leaving Greg without an office space. I doubt if that will happen but Greg does know Vivek better than I do.

Vivek and Sanjay have hired an intern and she does more than I do. I guess my time is running out. Still the answers lay on the other side of the world.

Last night I got a call from Juan. Someone saw the picture below on his Facebook page and remarked that he saw Juan at Folsom East with some cigar smoking daddy. That would be me. Well to Juan’s friend’s credit it was Fathers Day, but me? I’m no daddy though I do enjoy cigars every now and then.

Weeds was good once again, a few twists and Justin Kirk still rules. No spoilers here. Nurse Jackie was also very good. Where is it going though?

We will have to wait and see. Anyway, Edie Falco is great in the show as is the rest of the cast. Bonus points for shooting in New York City.

I slept really well last night and the last dream I had before waking up this morning involved my late cat Zed. In the dream I had cloned Zed several times so there were a few black cats running around.

It was a sweet dream and I did not want to wake up from it though I obviously did.

Tomorrow night I think I am going to see Ian Hunter do a free show by Battery Park. Mr. Wonderful, Jim Mastro is playing with Ian Hunter so that means I’ll probably see Meghan and the girls.

Jim plays with Ian on tour a lot so it should be a fun show, especially since I’ve been somewhat interested in Mott the Hoople lately.

There is also a show on Thursday, sans Ian Hunter in Hoboken. Jim and Fred Smith (of Television) own the Guitar Bar and every year for the summer concerts in Hoboken they put on a themed show featuring the Guitar Bar All Stars.

Last year it was for the video game, Rock Band, or Guitar Hero. The year before that was the British Invasion with no Beatles or Rolling Stones songs allowed.

I don’t know what the theme will be this year but it does promise to be a lot of fun.

Just have to get through another agonizing day or two of clock crawling in the office. 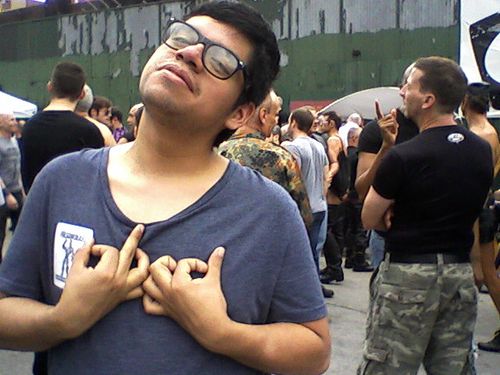 3 thoughts on “Bring on the Lucie”