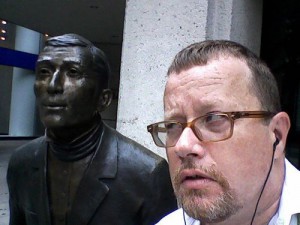 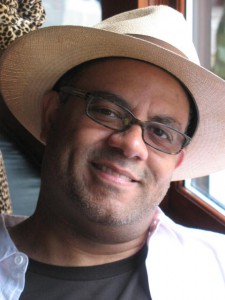 Hey! I didn’t write yesterday. I was sort of cross eyed and painless but I wouldn’t say shitfaced. It was the end of a perfect day. The day started nicely enough, I was able to get up and get out and get some bagels.

Came home with the newspaper and the bagels and had some eggs. It made for a nice breakfast. Little did I know that it would be basically the only thing I would have eaten beside cake later on.

Seven pizzas came and went, Spanakopita (Chaz!), various salads, and cakes were all devoured. I’m not complaining. That’s why the food was there. I reckon there were about 50 people there. A few people wandered into Maxwells thinking the restaurant was open for brunch.

I generally caught them and showed them out and directed them to the Madison at 14th & Washington Street. Most of them were cool but one asshole walked away saying ‘go fuck yourself’. Me being me- couldn’t resist saying, ‘no, you go fuck yourself!’

What the hell… I had backup. Luckily the backup wasn’t needed and she wheeled himself away in her wheelchair. It was a great collection of family and friends. The cousins from South Jersey showed up, mostly.

Jim Mastro re-officiated the vows that were said originally on April Fool’s Day. . It was great to have so many friends and family witness. Unfortunately the original witnesses Chris Repella & Tom Winnick couldn’t make it due to unforeseen circumstances.

Lot’s of photos taken and even video. I have seen some of the photos but none of the videos. I’ve been trying for the past 24 hours to upload my pics, but my computer seems to be behaving quite oddly. I will have to get in touch with Rand on the computer front.

Deena Shoshkes & Jon Fried sang My Boyfriend for me… I sang along standing next to Bill. Then Lily & Tim from the Street Corner Mourners sang 2 songs, one of them seemed written or rewritten so it could be about me.

I was compelled to take the straw hat off of Bill’s head and pass it around so people could donate some cash to the Street Corner Mourners. I did clear it with Jon & Deena beforehand. They were fine with it. It looked like a nice collection.

Bill sang Picture in a Frame by Tom Waits accompanied by Lois. I was going to sing that, having practiced it for two days beforehand. Instead I sang All My Loving by the Beatles which to my surprise most everyone joined in and sang along with me.

They jumped into a chorus too soon but I got them back on track.

It was actually the first time I played and sang in front of most of my friends and all of my family. After that, it was all a blur for me mainly. So much going on, so many friendly faces.

Juan arrived late but still welcomed and he jumped into the festivities with gusto. Bill’s cousin Elisa and her husband King also arrived looking fantastic. Elisa looked great in her new ‘do and King looked regal in a pink suit.

It ended basically when the World Cup ended.

Some of us made it over to Rand & Lisa’s apartment for an after party. Jane, Martha Griffin and Loren & Andrew joined Rand & Lisa, Bill and me and Lois. More drinks were consumed and some spicy hot cheese was served.

Today was a quieter day, spent down in Sandy Hook with Annemarie, followed by Ice Cream at Crazies in Rumson.

Two wonderful days. One spent with a lot of friends and family, the other spent with my dear sister Annemarie.

Still having difficulty uploading pics, even off of Facebook. Sorry!

I was able to get this one uploaded! 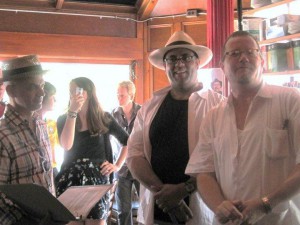