Oh it’s incredibly muggy. Plenty of hummus in the air. Like wearing a wet sweater in a very stuffy room, which by the way, is what I am wearing as well as where I am writing. All just to prove a point.

Bill is doing better, I guess what ever he had the other night was just a transient thing. Such drama though, but then again he is an actor. He was fine last night when he came home.

We watched Senator Edward Kennedy’s funeral mass this morning into the afternoon. Couldn’t resist. Part of my Irish Catholic upbringing.

Bill having been brought up Evangelical Protestant hasn’t really seen the glitz and glamor of the Catholic ceremony so it was a thrill for him. He was also impressed that I knew the liturgical responses to various prayers.

Lift up your hearts/We lift them up to the Lord/Let us give thanks & praise to the Lord our God/It is right to give him thanks and praise because if we don’t he will kill us all.

Alright, so I ad-libbed a bit there.

It was a nice service though. Made it back in time for the burial broadcast which is going on right now.

Between then and now I went into the city, specifically to hang some pictures. After helping William hang his art work and whatnot for 11 years in Weehawken I sort of have a knack for hanging pictures.

At least that’s what I told them in the office.

Collected some potato salad too which was very nice & tasty. The rule of thumb for hanging pictures is not to hit your thumb. And balance too.

I guess I’ll hear if they don’t like the placement. Seemed alright by me.

I did find out the last time I was in the office that the neo-cons that I butted heads with might be out of business. They were counting on several million dollars to keep them afloat but they only got 700k.

I guess there isn’t any money in sub-prime mortgages these days. Or any faith in them.

The whole hanging pictures thing took under an hour. After the office visit I walked over to Second Avenue where a sparsely spaced street fair was going on. Saw some people from the neighborhood that I used to see often. A nod here, a smile there.

I walked down to the Path train and rode back to Hoboken from 33rd Street.

Last night I did watch Luis Bunuel’s Robinson Crusoe. Turned out I didn’t know a few things about it, like it was published in 1719. For some reason I thought it was written in the 1800’s.

It was Bunuel’s first color film and his only English film. Dan O’Herlihy was nominated for a best actor award for it in 1952.

The funeral procession just stopped by the Capitol Building in Washington DC en route to Arlington Cemetery. A prayer and some thanks to the staffers on Ted Kennedy. A nice send off.

That’s basically the day so far.

Hot hot hot. Cicadas make their love songs in the trees. It’s an interesting sound, unless they’re right outside your window. A nice kind of day overall, especially if spent inside.

I watched Cadillac Records on DVD, and that was somewhat enjoyable. Enjoyable enough to finally load the Martin Scorsese Presents: The Blues Boxed set that Julio got for me a few years ago.

I’m sure certain liberties were taken with the story but it was an entertaining summer movie. There was even an appearance by an ersatz Rolling Stones with a Mick Jagger in awe of Muddy Waters holding the door for them, when it should have been the other way around.

Some artists sang their own material, others merely lip synced. It’s recommended if you want something good to watch on a hot summer night.

Tonight Bill is directing a new set of actors for a new play down the line.

Mitch Easter is playing at McSwells. My brother Frank asked me if I could get him in, so I duly called Roda who said he wouldn’t be able to say at the moment. I called Frank to let him know and he decided he probably wasn’t going to go anyway.

I plan on a walk to the river to check out Swingadelic who I didn’t see last night but think that a walk might bring them into my point of view. And I think Rand & Lisa might be there so that should be cool.

Plus it should help me finally wake up after the 2 hour siesta that I had a little while ago. And it’s a good chance to enjoy a nice cigar.

Tomorrow it’s off to Journal Square to get some blood work done. I set up an appointment on Monday but due to the wake and meeting up with my brother Brian in the afternoon, I postponed. So now tomorrow afternoon, that will be the time to roll up the sleeves.

Just checking cholesterol and whatnot. That will something out of the ordinary.

Haven’t been to the sunny climes of Jersey City, or at least that part of Jersey City since January. I wonder what it’s like during the summer? What do the natives wear?

For tonight, a walk by the river and probably coming home to watch some TV. I do have a copy of Luis Bunuel’s Robinson Crusoe. Not so much a surrealist film (though I’m sure there are surrealist touches), but an attempt from the late 1940’s early 1950’s to get a job in Hollywood.

So there should be no dream sequences of an eyeball being sliced open by a razor ala Un Chien Andalou, or for those playing at home, The Andalusian Dog, which Luis co-directed with Salvador Dali. But you knew that already. 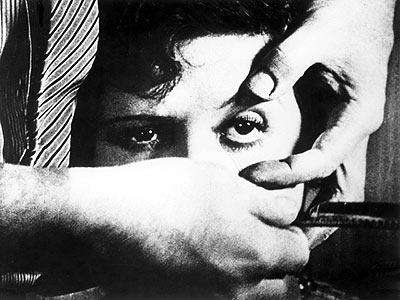