OK, so I only stretched before cycling yesterday, not so much afterwards but climbing 5 flights of stairs makes for some stretching doesn’t it? Doesn’t it? I was pretty tired though. Casey Chasm called while I was showering. He and the missus were going to Margarita’s for dinner but I was too tired to make it.

Plus I had food here that I had bought that needed to be cooked and eaten before it all started to go bad.

I was content with a few hot dogs last night and I settled in and watched Tennessee Williams ‘Suddenly Last Summer’ starring Maggie Smith, Natasha Richardson and Rob Lowe. It was a BBC production from the 1990’s I believe.

I had it in my Netflix queue, added it when I was mourning Natasha Richardson’s untimely death.

It was good, Maggie Smith and Natasha Richardson were excellent. Rob Lowe was passable as Dr. Sugar. No flashbacks like in the Joseph Mankewicz version with Elizabeth Taylor and Montgomery Clift. I suspect Tennessee would have been happy with this classy version.

After that I forget what I watched. I do have A Matter of Life and Death by Michael Powell on DVD via Netflix and threw that in the player but I wanted Bill to see it too and since he was doing a reading at the Theater for the New City last night I decided to hold off. I was a zombie anyhow and staying awake to watch the whole thing would have been a bit of a chore.

I did toy with the idea of a trip to the supermarket but it looked like it was about to start pouring any minute. By the time I figured out that it wasn’t going to rain it was too late, the supermarket was closed.

Asleep in bed by midnight. Bill was with his theater friends and didn’t get home until 3:00 in the morning.

I woke up around 8:00 this morning, glad not to have to go to work again. I roused myself from bed and shuffled about doing those morning things that I do most mornings when I don’t have to work.

Still plenty of parking spaces in Hoboken and it should be like this until Labor Day so come on down to Hoboken on weekends and park wherever you damn well please. I got some bagels for myself as well as Julio & Stine.

I planned to take a walk around Hoboken early this afternoon when Bill had awoken. He wanted to come but only after the Lawn hors d’œuvre SUV episode had finished. Oddly enough it was an episode that neither of us had seen before, from the early years with Olivia having a short spiky haircut.

The other night was a good one with Alan Dale who plays Charles Widmore on Lost as well as the late Meade patriarch on Ugly Betty. This time he played a judge who’s young son was murdered years before. A few twists that were too convoluted to write about here, but it was one of the best episodes of Lawn hors d’œuvre SUV that I had seen in a while. Bill missed it since he was tired and went to bed before it was broadcast.

So this afternoon after Lawn hors d’œuvre SUV we headed out. I arranged to meet Mr & Mrs Chasm outside their building and the four of us walked up to 14th street and proceeded to walk down the riverside, enjoying each others company as well as the sunshine and a lot of sunbathers. I applied sunblock again and I was quite glad that I did.

We walked over to Pier A and found a bench where we sat for an hour in the shade chatting each other up. We parted ways, Bill and I off to CVS and the Mr & Mrs off to wherever it was they were headed off to.

Bill and I ran into Roger Johansen and his wife Dina. on Washington Street. Always good to see Roger, he’s a prince. It was also the first time I had met Dina and she seemed really nice. Bill and I egged her on to get her MBA and perhaps she heeded our advice, that having an MBA would be a leg up in the search for a good job.

He invited us to his new place in Weehawken which is near his old place. He always had the best houses. I told him that Bill and I would love to visit, all he needed to do is let us know when.

Bill and I came home. He cooked for himself, I napped. Nothing like an afternoon nap. More people should do it. We can call them Siestas. I think it would catch on.

Woke up made dinner and now Bill naps.

I told him that when I wake him up at 9:00 we’re watching A Matter of Life & Death starring David Niven and Kim Hunter. It used to be titled Stairway to Heaven in this country, now it’s back to it’s original title.

Here’s some snappy snaps from this afternoon. 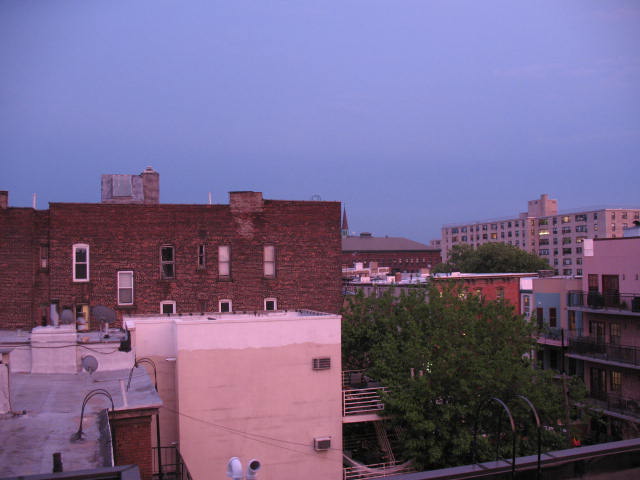 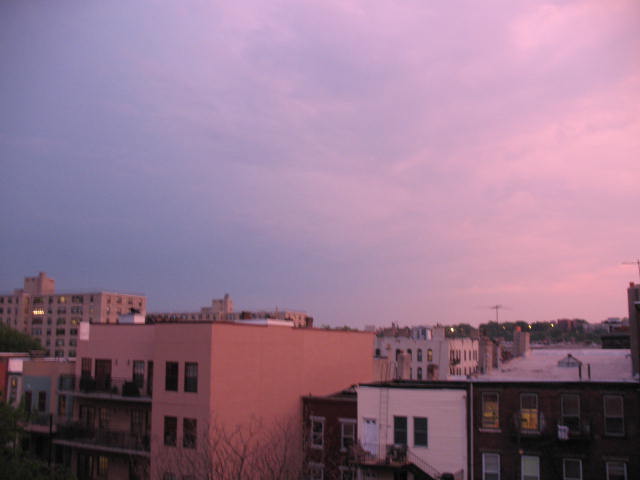 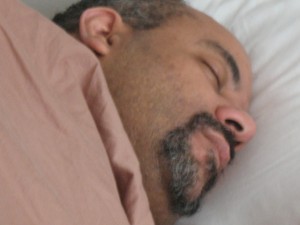 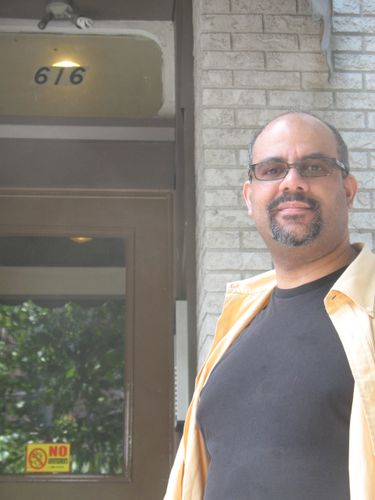 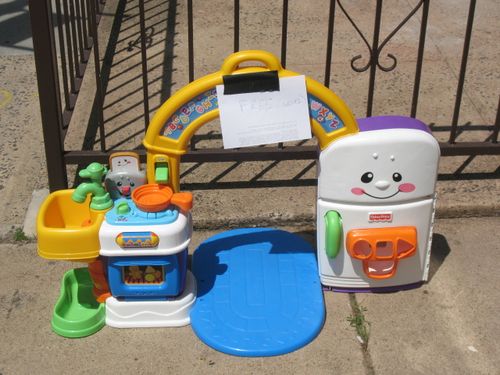 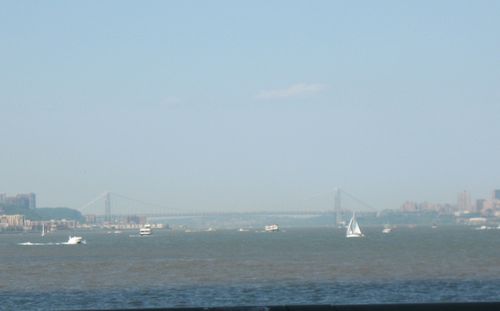 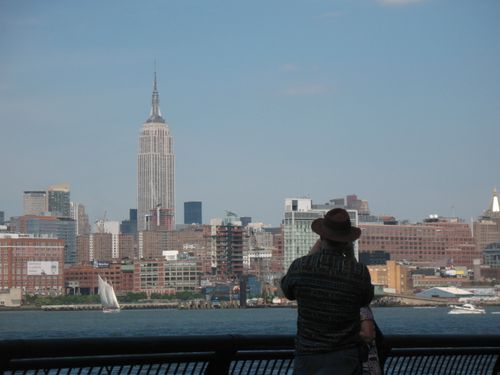 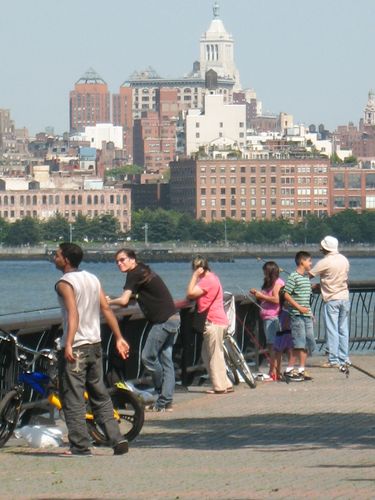 It’s another scorcher, this being a Saturday. Last night was hotter, yesterday was hotter. I watched Joe Strummer: The Future is Unwritten. A very good documentary on the former John Mellor. Those who knew the Clash story knew that Joe’s father was in the civil service in England, Joe was born in Ankara, Turkey. Being middle class didn’t help with one’s punk credentials in England at least.

It was done similar to the Beatles Anthology, and what they did regarding John Lennon being dead. They used countless interviews to tell Joe Strummer’s story. It wasn’t all favorable. Joe dicked some people in his life and they tell their side of the story. Joe regretted some his his actions, like kicking Mick Jones out of the Clash.

The documentary was filmed around campfires, in London, Los Angeles and New York as well as other places. Mick Jones was indoors though. No campfires for him. Topper Headon, excellent drummer kicked out for being a junkie, tells of living skint while hearing Rock The Casbah playing somewhere. Joe also slept with Topper’s girlfriend, as well as other girlfriends of various people.

It was Topper’s song, Rock The Casbah. I’m sure he gets royalties, since by the time of Sandinista, all the songs were credited to the Clash, rather than Strummer/Jones, or Simonon. Not much Paul Simonon in the documentary. Thats something that keeps bands together, songwriting royalties, U2 does it. Everyone shares in the money. Joe Strummer was also upset that Rock The Casbah was being used as a soundtrack to the first Gulf War.

Songwriting breaks up bands usually. It caused stress in Talking Heads. The band would jam and David Byrne would write the lyrics and get all the songwriting royalties. Eventually they changed it to Lyrics by Byrne, Music by Talking Heads.

But the Clash dissolved, and forget about the Cut the Crap Clash, they barely got a mention. It’s a very good documentary directed by Julien Temple who made The Great Rock and Roll Swindle and The Filth and The Fury about the Sex Pistols. Worth watching if you’re a Clash fan. Some of the footage is also from Dick Rude’s excellent documentary on Joe, called Let’s Rock Again. Also worth watching.

Manager Bernie Rhodes comes off badly. He hated Mick Jones and Topper Headon and set about working Joe and Paul against Mick after Topper got the boot.

I started watching the extras on the dvd, Mick Jones getting fucked up as he tells the story of the Clash over a few hours. Really a spliff too far. I couldn’t keep my eyes open and I started to look like Mick Jones so I wound up asleep in my air conditioned bedroom by 11:15.

Didn’t sleep too well. Pillows went bad. Sometimes they just get uncomfortable. Since I was off yesterday I bought the papers instead of reading them online and saw a sale at the Newport Mall on pillows. That was my plan for the day. Make it to the mall. I walked by Mr. L, my barber and at 8:30 there were guys waiting for a haircut.

Not being one to wait, I got some bagels and the papers and came home for breakfast. An hour later I was out on the street, more guys getting haircuts. It’s so hot out that a lot of guys are getting shorn today. So I headed to the train station, walking in the shade and hopped on the light rail to the Newport Mall.

I was there before most of the stores were open. Bought some pillows on sale, bought some nice Airwalk sandals at Payless for $15.00, and microfiber underwear marked for clearance at Macy’s. I can’t wear cotton underwear anymore. I find it uncomfortable, and microfiber is more comfortable but seems hard to find. I found it though.

Made it back to the light rail, back to Hoboken where it was still too busy to get a haircut. Came home, had a bagel and decided to take a nap with the new pillows. It was a much needed nap. Had a dream that my brother Brian was calling me to tell me he had some really good acid.

I slept for 2 hours, air conditioned and happy. It felt like the nap made up for the uneasy sleep of the night before. I finally felt on track. Went out to try to get a haircut again, but still, no luck. Bought groceries and talked to Annemarie while I shopped in the air conditioned supermarket.

Mr. L’s closes at 5:00 on Saturday so I went down at 4:45. My barber, Tony was finishing up for the day. The other barber told me that I was next in line 3 times. This time I was staying. Just as well since I was Tony’s last customer. I told him to cut it all off. He knew better than to listen to me. I just got a nice close cropped haircut. Not a crew cut, more like a suedehead, and it feels great.