It’s been a lovely Saturday afternoon. A lovely day all around. Last night wasn’t so bad either. I just watched TV, saw the 2nd Kids in the Hall episode on IFC. Forgot about the first. Just as funny as they used to be. They age just like us!

I watched the Soup last night, so I guess it was mainly all about comedy and laughter. Does anyone remember laughter?

I went to bed around 12:45 but was unable to sleep. After 20 minutes I got out of bed, telling the air conditioner, the fans, the pillows and most of all the bed that I was leaving the room and that when I came back I had better be asleep.

Yes, I talk to objects all the time. I hesitate to call them inanimate. I’ve actually done that all my life.

After about a half hour of checking emails and responding to Kevin Crud’s comments I went back to the bedroom where the appliances and the bed were waiting for me and within minutes I was asleep. Slept really well and woke up around 10:00.

Oh it was so nice to sleep in on a Saturday morning. It’s really something special. As I was making coffee Bill walked through the door laden with dry cleaning. I told him I would have picked them up for him and he said he texted me.

He did. I didn’t know it until after the fact. I soon went out for bagels and the paper, and picked up my own dry cleaning. After a nice breakfast, I did my own laundry and after 2 washes I decided to go out. Another stop at the dry cleaners with 2 shirts I had left behind.

Then I headed over to the bibliothèque to drop the Love & Rockets compilation but absentmindedly left it at home. I took the light rail over to the Newport Mall and looked at Rockports in Macy’s.

It was a mess and pandemonium. And they didn’t have the Rockports I had seen online. I did have my 3:00 phone call with Annemarie though.

I went into Justin’s and bought two pair of lavender socks. And then went next door and bought a few pair of OTC TNT’s. No shoes, but had socks. Had a nice walk home, past Bobby Risotto’s building. Didn’t know it was his birthday until I got home.

Bill was awake from his nap and was getting ready to drive a bus back to Atlantic City. Before he went out he asked me to drop some shirts and a tie at the dry cleaners, making it 3 visits to Cary’s today.

On the way there I ran into Rand and Lisa coming back from the supermarket. A nice chat with a few laughs was had. A quick jaunt to the supermarket for myself, and now I am back home.

The Dark Knight is playing behind me. I am going out tonight, to Joe’s Pub to see Adele Bertei, backed by the Raybeats with Gail Ann Dorsey on bass. I’m excited. I hardly ever go out these days.

I doubt I will write tomorrow, but I might add a post script to this here entry when I come back tonight. But I am not guaranteeing anything.

Have a good night. 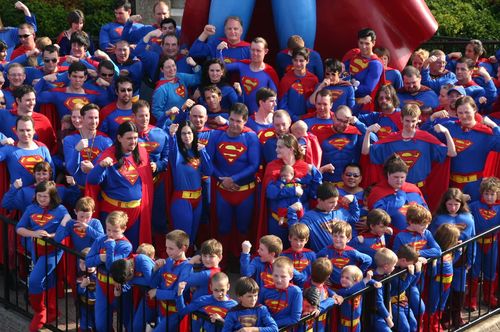 “First they came for the Supermen, and I didn’t say anything since I wasn’t a Superman…”
Post Script 1
I got back from the show at Joe’s Pub about an hour. There are some pics and some videos but I’m having some difficulty with the programs to edit them. Adele Bertei was first up, opening the show. The Raybeats and Gail Ann Dorsey came on to silence. I started a round of applause.

I think they did Slaughter on 10th Avenue, I’m not sure. It was a song like that from a 1950-60’s detective show or film noir. Then Adele Bertei came out and sang Shakin’ All Over. They did mainly covers, Sam & Dave Wrap It Up, The Marvellettes The Hunter Gets Captured by the Game, James Brown There Was A Time and a handful of other songs. They played for about 45 minutes and came back for one encore.

I saw Pat Irwin from the Raybeats and told him what a fun show it was. I asked if the Raybeats were getting together again and he said it was unlikely. Pat’s other band Command V is playing on Wednesday but I doubt I could make it.

I didn’t stay for the headliner and I was back in Hoboken by 10:40 and that’s about it. A nice early night. 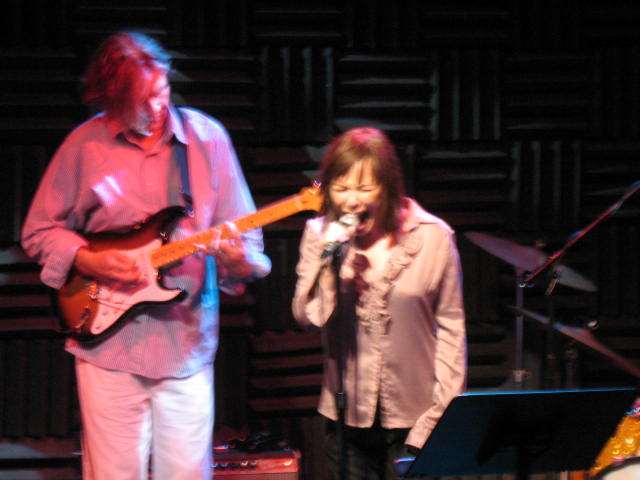 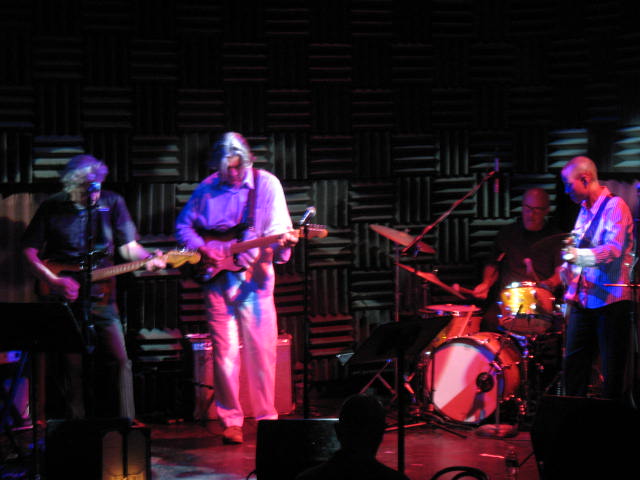 Post Script 2
It’s Sunday. Not doing the 500 word thing, but I am bending the rules. They’re my rules and I will bend them as I see fit. I really had a good time last night. I went by myself. I posted on Facebook a few times that I was going, and even wrote about it here on this blog. So it was really no secret what I was doing.

I got off at Christopher Street which I hadn’t done in a while and checked out a few shops on the way. Shops that a certain someone would have more than likely been freaked out about. I’ve gone to these shops with Pedro so it’s not so much a gay thing, since Pedro is as straight as Six O’clock.

After that I meandered over to Washington Square Park where I watched the crowd watching the acrobatic performers. Had a little cigar as I sat there, taking it all in and getting a wee bit damp from the fountains by my back.

Started to head towards Lafayette Street, walking along west 4th Street. Been a while since I’d been around there. Bottom Line gone. Tower Records gone. Dojo is still there though. Not much of a line outside Joe’s Pub. I was behind 2 lesbians who were there to see the headliner, Bettina Koster. They asked if I was there to see Bettina and I said no, I was there to see Adele Bertei. They seemed unimpressed.

Soon I was inside and turned down an offer of a table with it’s 2 drink minimum and $12.00 food order minimum. I opted for the bar which was not crowded. Had a nice sight line too. A few minutes later, out come Pat, Jody and Don with Gail Ann Dorsey. Followed by Adele Bertei.

It was a good set, but way too short. I left after their set, not staying for Bettina Koster. A quick walk back to the Path train on Ninth Street and I was back in Hoboken.

It would not have been done this way if I had gone with someone else. I was accountable to no one but myself. It was no secret. All one would have to do is read my Facebook status, like Dave Bell did, or this blog.

I had a good day today, just fartin’ around. Raining on and off. Finally was able to upload the videos which are below. I don’t regret going and I don’t regret not calling anyone up to tell them what I was doing. Some people are upset by this but I can think of two events where I went with someone and it went so badly, hurt feelings abounded.

With all of the fun and relative calm this weekend, it’s surprising that a 3 minute 42 second phone call came thisclose to ruining the good time that I had. Je Ne Regrette Rien.

I guess it’s Friday. It must have been. I had an appointment to get some blood drawn to check out my cholesterol levels. It was a painless procedure but of course I didn’t watch.

I got there early and was out even before my scheduled appointment was to begin. It was a Path train ride to Journal Square.

I had enough time to check out a soul cover band doing Ain’t Nobody by Rufus and an instrumental version of Mercy Mercy Me by Marvin Gaye for a lunchtime show on the plaza. I decided to take the Path train back to Pavonia/Newport where I checked out the Newport Mall.

Some Israeli woman was doing her best to hard sell me some hand softening lotion made from some Dead Sea salts. It was on sale, marked down from $80.00 a jar to $40.00 a jar.

I explained I was unemployed as she washed the Dead Sea salts from my hands. They were softer than before I guess, but I wasn’t such a soft touch myself.

I bought some shorts a shirt and some underwear, all on sale. And some dress socks, the ones I like. Thick and thin ribbed, over the calf. Now all I need is a job to wear them under my suits.

But that’s not going to kick in full gear until October. I’m looking but things are barren out there.

I did make it home minutes before the skies opened up and the rain fell in a deluge. It was like that for about 30 minutes before eventually stopping. The rain cleared out the hummus leaving things nice and cool.

Now it’s been raining intermittently about every half hour. Which makes it cool outside but you have to close the windows which makes it stuffy inside. Presently it’s cloudy and the sky is the color of orange sherbert over Jersey City Heights.

Last night was a walk to Sinatra Park where I met up with Rand & Lisa while Swingadelic played. I finally saw Swingadelic live and they were OK. Nothing to write home about.

Rand, Lisa and I strolled up the river towards 11th Street. I expected a crowd outside of McSwells since Mitch Easter was playing, but Roda came out and said there was probably 30 people in the back room.

I opted to just go home since it was so humid out and I was very sweaty. It’s too bad for Mitch Easter but then again I only really liked the Let’s Active EP that came out 26 years ago and excepting the album Cypress that came out a year later I have no idea what he’s been up to and I guess I didn’t care enough to have a look see.

I’ll never know if it was my loss or not.

Now it’s 7:40, Bill is taking a nap, asking me to wake him up in 3 hours which seems odd but he reckons that he’ll know then whether or not to keep on sleeping or wake up for an hour or so.

Don’t try to figure him out, I gave up years ago. 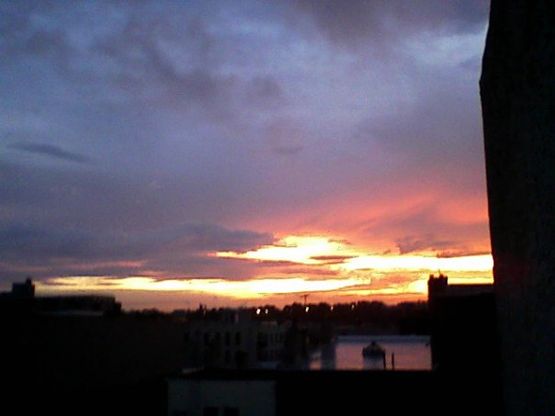 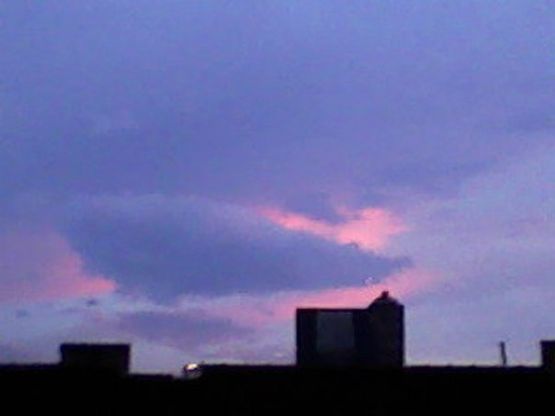