Well it’s Monday again and I’m back to posting at the usual time. Yesterday was an early posting, before noon. Before 11:00 even. I was fired up and was able to write over 600 words in about 20 minutes. Relatively lucid writing I think.

After I wrote I spoke to my sisters, Annemarie, the white one and Billie in DC, the black one. Both were very supportive and listened to my side of the story. If you want Bill’s side of the story, you would have to ask him.

The day progressed and I went out for a bit, in the rain. Not as weird a day as Saturday turned out to be. Though things on Saturday night were better than during the day. My friend Lois has a show coming up called ‘Is That Supposed to Be Funny?’ and she needed a photograph for the poster. 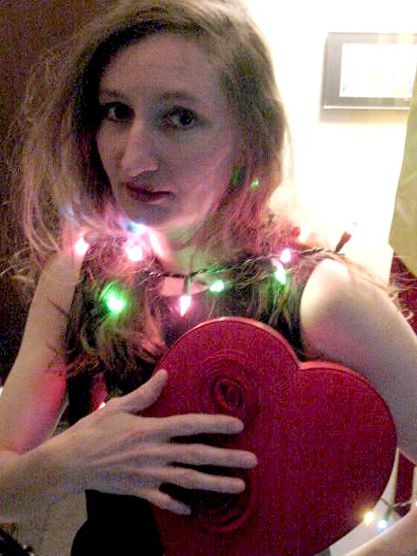 Lois DiLivio in 'Is That Supposed to Be Funny?'

She came over and we talked listened to music, and even played some music a little bit. She told me of a project that she has with Rand and I immediately suggested doing ‘How Many More Times’ (or a rip off of that). I picked up the bass and did my best John Paul Jones/Duck Dunn impersonation, playing the initial notes.

Of course they weren’t the proper notes as Lois pointed out, but she got the feeling I was putting into it and she listened when I said, ‘So what if it’s not the right notes? If that’s the case, then I have written a new song!’

So maybe, and a really big maybe at that, who knows? I might play along with Rand and Lois at an open mike somewhere down the line. Rand on trombone, Lois on ukulele and Lisa doing some vocals as well as blowing bubbles.

That would be for the cover version of Don Ho’s Tiny Bubbles. Which I just figured out went ‘Tiny bubbles, in the wine’ rather than what I thought it was for maybe 40 years, ‘Tiny bubbles, tenderloin’.

We took about 17 pictures with various props that I had around the apartment. It was great having Lois over for a visit. Since Juan is down in South Jersey, no one comes to visit me in my messy apartment. That brings me to Sunday’s problem which weighed heavily on my mind.

Around 4:20, yes-4:20, I gave Bill a call and we wound up talking for nearly 2 hours. Cleared a lot of things up and decided to try to make time for each other and yes, I will go see Slumdog Millionaire with him.

We wound up talking during commercial breaks on the Oscar program. Hugh Jackman was better than I expected. He was great actually. I always enjoy the Academy Awards, no matter who is hosting. Hugh Jackman mentioned rehearsing for the show the day before in his garage and jumped into the opening number which looked like it was rehearsed in someone’s garage. And Anne Hathaway was pretty funny.
Who knew she was the daughter of Mrs. Hathaway (from the Beverly Hillbillies)? Not me.

I liked the 5 previous winners of each acting award coming out and praising each nominee. Harpy hated it. I know… I called. I think it would have been better if they all talked at the same time. That would have been great.

Penelope Cruz won and she sure was pretty. Still have to see Vicky Christina Barcelona. Annemarie saw it liked it. Of course, Javier Bardem is in it. Penelope Cruz thanked Woody Allen and specifically thanked Pedro Almodovar which was a nice touch.

Tina Fey and Steve Martin came out for the writing awards and they were funny, especially with their new made up religion joke which could just as easily been Scientology.

The winner for original screenplay was Dustin Lance Black for Milk and he gave the best speech of the night, echoing Harvey Milk’s words to young gay people, telling them that they are not alone, they are not cursed. They are loved and valued.

Next came Jennifer Aniston and Jack Black who made a presentation about something standing on stage mere feet away from her ex, Brad Pitt and the woman he left Jennifer Aniston for, Angelina Jolie. Awkward! But Pitt/Jolie laughed at all the right places. I usually don’t care about those things, but I was reminded of their tabloid drama last night.

Then came a clip show of romantic scenes from 2008 which included a shot of James Franco kissing Sean Penn in Milk. Natalie Portman and Ben Stiller came out. He was made up to resemble Joaquin Phoenix and stayed in character for an awfully long 5 minutes which was 4 minutes too many. It got tired fast.

The Hugh Jackman/Beyonce musical tribute was spectacular to look at, but musically it was daft. A lyric from 20 songs intertwined by various singers was a mess. But it looked great. Then Heath Ledger won the supporting actor nod and his mom, dad and sister made a speech. Cuba Gooding’s non praise of Robert Downey Jr was ok, not that funny.

Documentaries came up and Man on a Wire, about Philippe Petit walking a high wire between Tower A and Tower B of the World Trade Center won which made me feel good since it was the only documentary I had seen. Luckily there were no shots from the documentary which had my palms sweating.

Every time Slumdog Millionaire was up for an award it won. Music, director, movie, cinematography, adapted screenplay, best ushers, ticket takers, popcorn. It won all handily. It probably would have beaten Heath Ledger if they were nominated in the same category.

Jerry Lewis came out and got the lifetime achievement award from Eddie Murphy. I think it was the first time a DC Comics character received an award. Foreign film went to Japan for Departures, which I haven’t seen.

Danny Boyle, Slumdog director followed by Kate Winslet who had a great speech, but what made her speech for me was when she tried finding her parents in the audience and got her father to whistle to show where he was. My father used to whistle like that. Brought back memories, memories of thinking that I was being treated like a dog.

Sean Penn won for Milk and he too had a great speech. It was good to see Milk getting some recognition, 2 awards. Then Slumdog Millionaire won best picture and it was all over.

Me, I’m just glad that Bill and I are back on track. 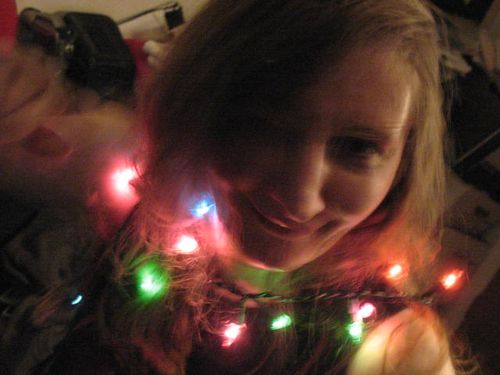 Friday night, yet feels like a Saturday night. Looks like a pump, feels like a sneaker. Bill and I went to see Milk this afternoon in Chelsea. Sold out show at 2:30. An excellent movie, well done.

I can’t really say that I’m a big Sean Penn fan but I have utmost respect for him since playing Harvey Milk. James Franco, also someone I was ambivalent towards was quite good as well as hot. Emile Hersh played Cleve Jones and I had forgotten his role in the Harvey Milk story.

Cleve Jones is the creator of the Aids Memorial Quilt, aka the Names Project. The other day I posted in my Facebook page a statement from Harvey Milk, You Cannot Live on Hope Alone, which still brings a tear to my eye.

There were a few moments in the film that tears were rolling down my face. I knew where it was going to end and I was dreading it, but it was remarkably handled. Just so well made, Gus Van Sant did a commendable job.

Harvey Milk was a hero of mine. I feel one of his main points from his life was to get gay people out of the closet and destroy those myths. There is no shame, we are not monsters or child molesters. WE are your brothers and sisters, your children, your friends and co-workers.

For years, maybe centuries we have been told we were inferior, perverted, just because of whom we love. To find out that I was gay at the onset of puberty was an earth shattering moment for me.

I remember it perfectly. One night I was letting the dog out in our backyard and while I waited for him to do his business I looked at a newspaper waiting to be tied up and given to our neighbor for recycling.

There was an article that caught my eye, an article in the sports section about a footballer, Dave Kopay who had just come out of the closet and giving the NFL a big scare, if not society as a whole.

He cracked the myth of the limp wrested florist or hairdresser. Here was a football player who could probably beat up anyone in the room who called him a fag, coming out of the closet. I remember getting aroused reading it.

That is when I knew, when I had my ‘uh-oh’ moment that October night in 1976. As confusing as it felt for me, my life plans whatever they were at 14 years old, getting married and having kids was what was drilled into me, as confusing as that was, it also felt true.

I knew then, that this was the way I was, no choice involved. And really if you think there is a choice, at what moment do straight people make their decision to be straight?

It was painful and lonely for me. I did look it up in a dictionary and that was basically telling me I was abnormal, a deviant. I knew I wasn’t those things.

In 1976 there were no Gay/Straight Alliances in high schools and if there was, I was going to a catholic high school and there certainly wouldn’t be one on that campus. I eventually found my footing and was forced to live a double life, or a lie from the age of 14.

Not very easy and the terror of being found out always loomed in my mind. I was found out once by someone in my immediate family who said I was disgusting and perverted and would tell mom and dad. I hyperventilated as the room spun and saw that my world could be destroyed that very moment.

Somehow I got through that and as I far as I know, they didn’t say anything. Eventually I was outed. My father found magazines under my bed, but unlike my brothers with Playboy and Penthouse, I had Blueboy and Mandate.

My father told my mother who told my brother then to my sister and then to my brother and when I was confronted I admitted it. I knew I couldn’t live there anymore.

I wasn’t kicked out and they didn’t want me to leave, but I knew I couldn’t live my life the way I wanted to in Lodi. I was in Hoboken more and more, hanging out with an intelligent group of college graduates and was more comfortable there.

That was about 8 years after I found out about myself in 1976. Almost 2 years later Harvey Milk was reported on initially as being the first Gay person elected to public office and it was national news in January 1978.

On November 27 1978 he was assassinated in City Hall, as was Mayor George Moscone by former San Francisco Supervisor Dan White.

As terrible and horrible as Harvey Milk’s murder was, I felt equally bad for the Moscone family. George Moscone was a progressive Mayor and who knows how far both he and Harvey would have gone if only they had lived.

I highly recommend this movie. It was so good I would probably see it again in a theater if the opportunity presented itself once more.