Just got back to Hoboken with Bill after his performance of the National Anthem at CitiField before the New York Mets/Philadelphia Phillies game. Bill of course did an excellent job, he even had to compete with a jet taking off from nearby LaGuardia airport while singing the ‘o’er the land of the freeee’ part. He did well, but the jet’s engine had more power behind it. The crowd acknowledged Bill’s greatness and Bill shook the hands of soldiers and police officers as he left the field. I had hoped to record it, but the camera decided that the time was right to not being able to record.

I did have the foresight to record the sound check with the tablet but Bill and I thought the camera would work best. We were proven wrong but happy enough to have the sound check which did not have a competing jet flying overhead. And there will be a DVD from the New York Mets organization in a few weeks. That would be the one that was on the big screen which I was trying to feature along with Bill singing in the foreground. That was recorded in my head and you can’t go there. Sorry.

The sound check video is on Facebook and has been well received. At the game were a lot of Bill’s friends including his former co-workers and good old Moe (whom I always picture as looking like Gabe Pressman even though he doesn’t look like him at all) his former boss, the one I had exchanged emails with yesterday. We both ignored each other as my brother Frank with sister in law Elaine and their friends plus my niece Corinne and her beau Vic. All nice and pleasant. We weren’t sitting near them though so pleasantries were brief.

Our seats were by Bill’s dentist and his crew. Same level- nose bleeds. Last time I was that high up at a stadium was when I went on a day trip to Shea Stadium for a Mets/Pirates game. The only thing I remember is Willie Stargell’s bat breaking in half when he swing and hit the ball, the top half of the bat going flying into the stand and hitting someone. We were safe from where we were sitting, safe from bats and fly balls. I wasn’t so sure then about the jets flying a few hundred feet of the heads of members of the Lodi Boys Club.

We didn’t stay too long, despite it being a beautiful day today, it got cold once the sun went down. I almost ran around Hoboken with Juan but I had too much to do already and that was a smart choice. It was really just a swell day with a very easy ride home on public transportation. A bad night for the New York Mets with a 4-0 shut out from the Philadelphia Phillies. That was just on the 11:00 news. You know better than to come here looking for sports information. 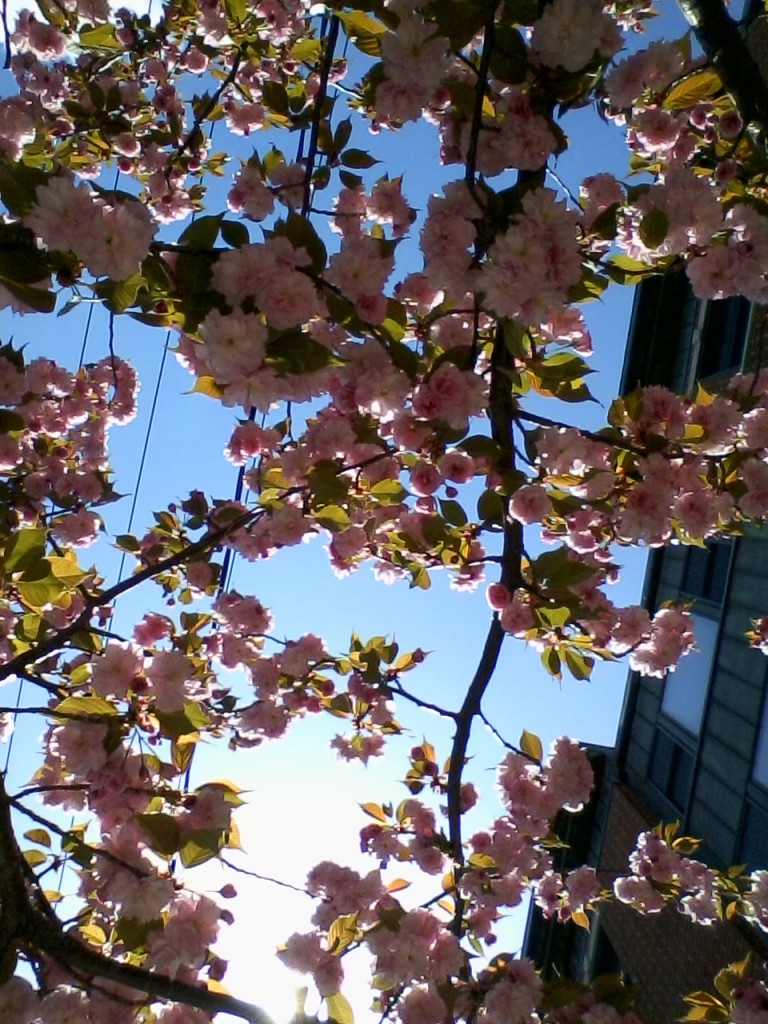 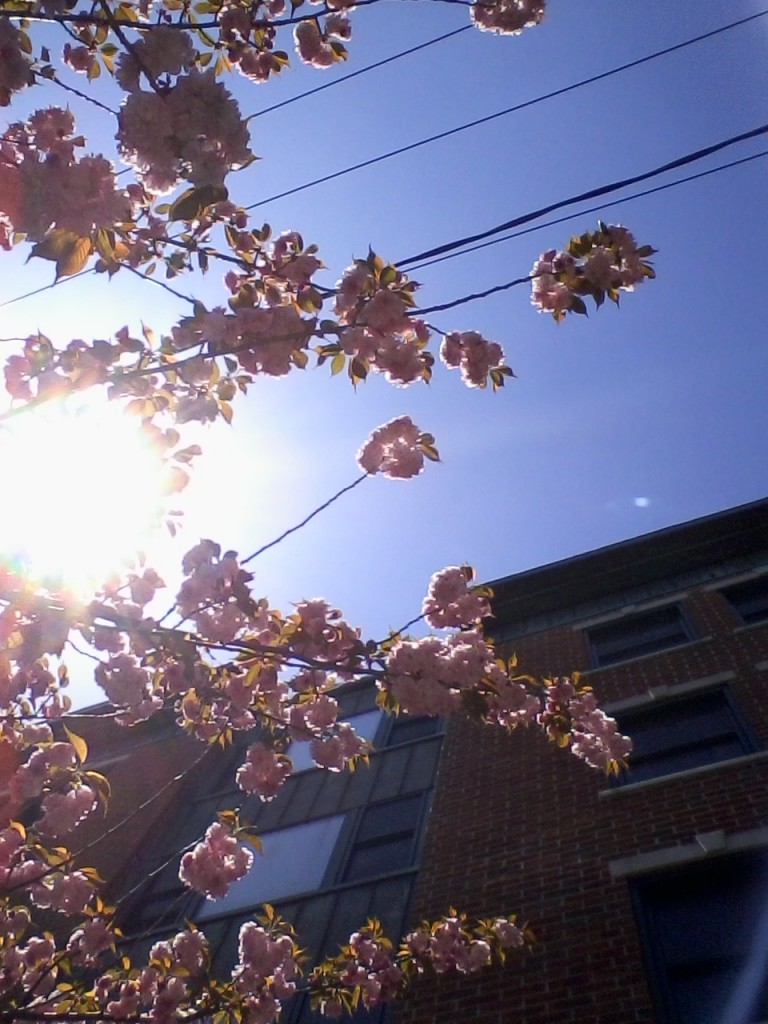 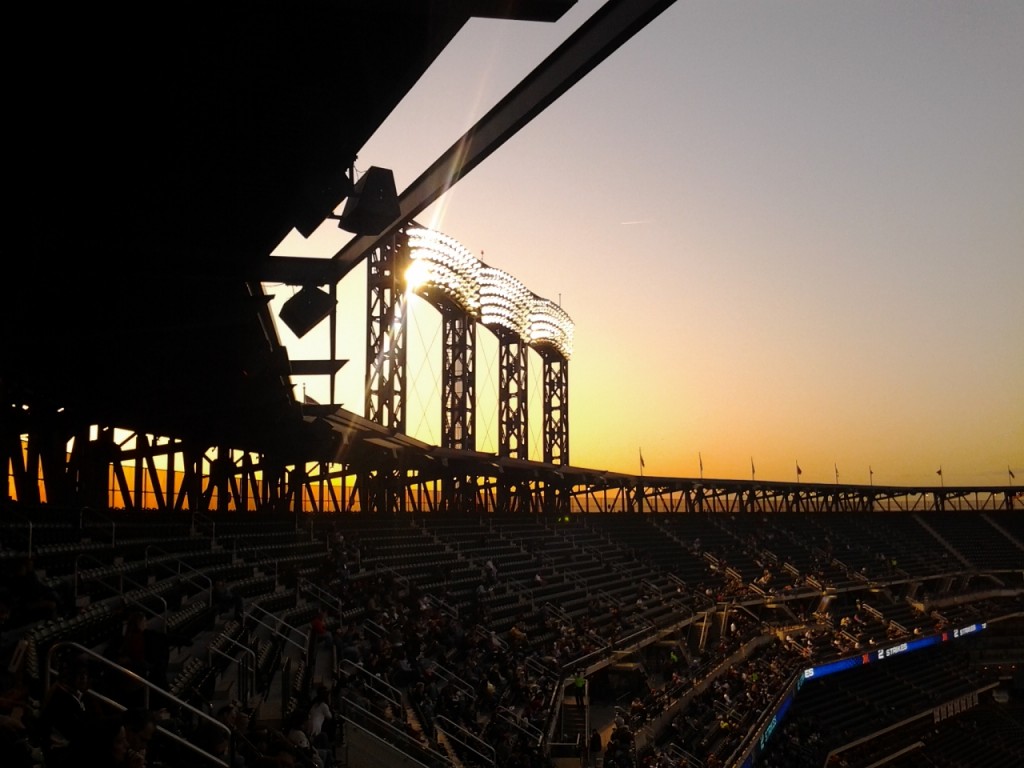 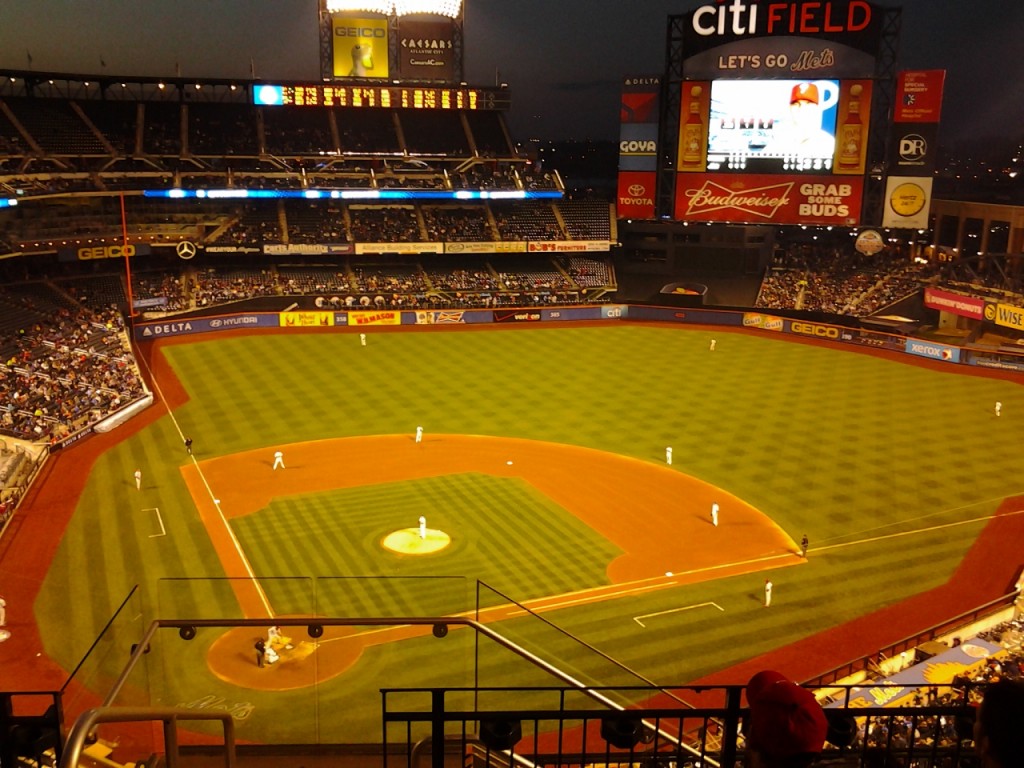 Daft Punk – Get Lucky
This is a great song.

Man, the past 72 hours have been a gas gas gas. It’s been fun starting with seeing Ian Hunter and being with Meghan and Lily & Ruby, seeing Rand & Lisa and RoDa and Elly & Logan and Autumn. Then even going to work on Monday wasn’t so bad. It’s certainly getting easier to ignore Braindead, only speaking to him when I have to.

Then yesterday I met with Wally, a chap I once worked with at Golden Staffing. Over the weekend I decided to take a break from the stress of trying to find a new job, but as luck would have it, on Monday morning I saw a job listing sent to me with Wally’s name attached. I felt I had to send something out there and he replied rather quickly.

We arranged for a meet up before I met up with Bill yesterday. Since it was official, or so I thought, I wore a suit & tie. Bill was going to be in a suit and tie for his performance and he likes to see me dressed me and I of course was happy to oblige.

Wally expressed surprise since I was in a suit and tie, asking me why I was so dressed up if I was going to a baseball game. I told him about Bill singing the Star Spangled Banner and I explained that I thought this was an interview; after all I did fill out the standard application that most staffing agencies provide.

It was more like hanging out with Wally, him telling me the final days of Golden Staffing was a nightmare and the head cheese (I forgot what pseudonym I gave her) was really a bitchy pain in the tuchis. After a few minutes he introduced me to another woman who worked at Golden Staffing before I did.

It was all rather brief and relaxed and I was out of there in about 20 to 30 minutes. I made my way across town, headed to Penn Station and smoking a cigar. I was feeling pretty mellow when I met up with Bill. Bill was quite chill as well.

We boarded a train to Willets Point, where CitiField (I prefer Shea Stadium) is. It was about a 20 minute ride. It was sunny and breezy as we walked to the stadium. Much to my surprise there was no handicapped access which is the manner in which I travel lately, avoiding stairs and whatnot.

Bill kept alongside me as we made our way to the stadium. It was a bit of a bother to find the correct gate to go through but once we did we were comfortably situated in a nice dressing room, much nicer than where we have to wait before NY Liberty or NY Knicks basketball games.

We were soon on the field for Bill’s sound check which he performed admirably. We met a few officials from the Mets organization then it was back to the room where I left Bill for a few minutes (he stopped talking to save his voice) and I went outside to smoke a cigar.

I was complimented on my suit while I smoked and I thanked them kindly before heading back in. I was back in time to head out to the field again. No one said anything, no big deal if I was there recording Bill’s performance unlike Madison Square garden where it’s stand here, don’t do that.

After less than 2 minutes it was all over. Bill walked off the field to a standing ovation and I duly followed. Quite a few people complimented Bill on his singing, patting on the back as well as handshakes and fist bumps. After we got our things from the dressing room, we went to our seats where Bill’s friends Kirk & Pat were waiting.

Once again en route, many people congratulating Bill and telling him what a great job he did. I merely walked behind Bill and beamed. We met up with good old Mike Cecchini and his cousin after a couple of innings, a few laughs with them as well as a woman asking Bill to stand with her sons for a photograph. We all went back to our seats, Bill running to the upper decks to see some other friends.

We were basically in the same section that we were in when Bill and I, Annemarie & Earl and Julio & Stine when we saw Paul McCartney in 2009. We stayed for 9 innings. It went into extra innings since the Mets and the San Francisco Giants were tied 6-6. Kirk & Pat headed back to the Bronx and Bill and I headed to the subway.

Tried to get in touch with Mike Cecchini since he lives a block and a half away from us, but his phone was turned off. A long local 7 train ride was ahead of us, but we made it through, Bill leading the way to gate 323 in the bus terminal. We waited a short while for the bus and soon we were home after exchanging words with Todd Abramson from Maxwells. Who knew he was a Giants fan? But he too complimented Bill on his singing of the National Anthem.

After all that good feeling from Sunday to right now, work was a breeze and I did really well in sales today, top earner me. No need to write about anything else on that front, so I won’t. I am glad to be home, riding a manic high wave. Hoping I will make it safely to the beach for another surfing go ‘round.

Oddly enough, writing this was a lot easier tonight than I expected. I hope it reads well, or at least as good as what you write, every day when you write whatever it is that you write. Not bad for nearly 1000 words in under an hour, wouldn’t you agree? Only eight more words to reach one thousand. Done! 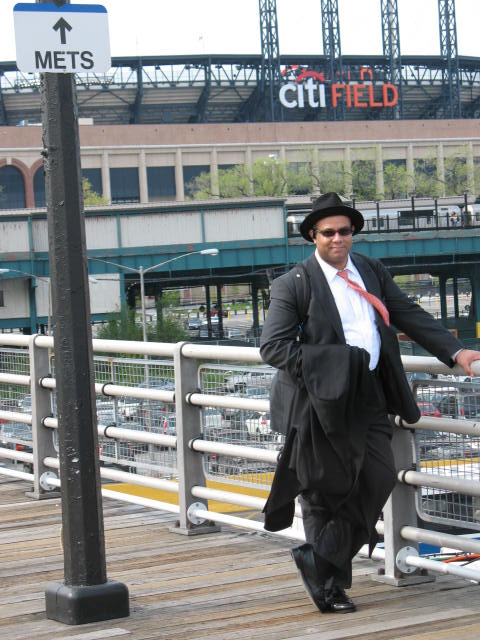 On to the show! 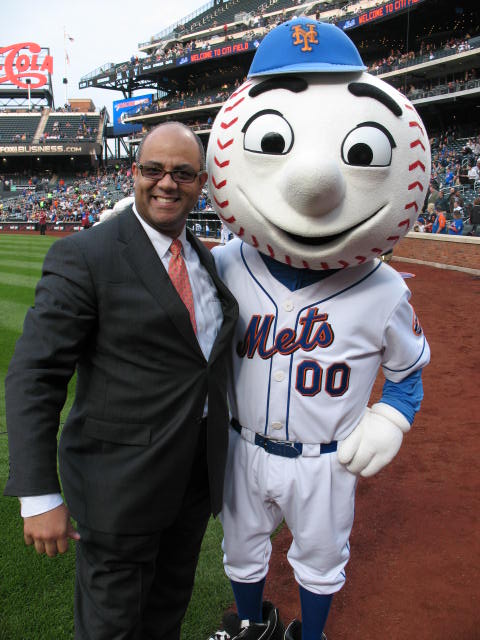 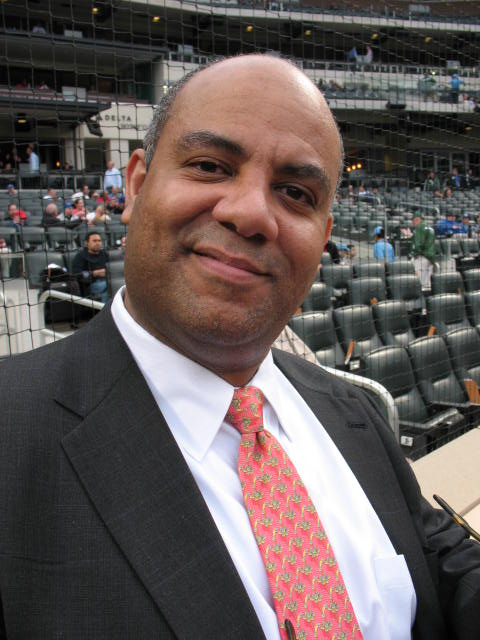 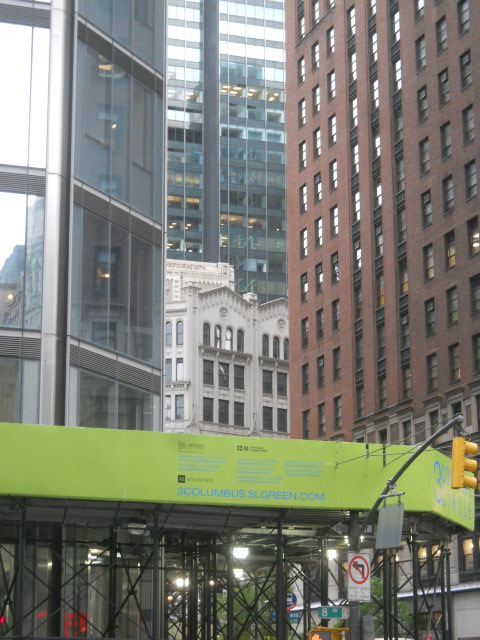 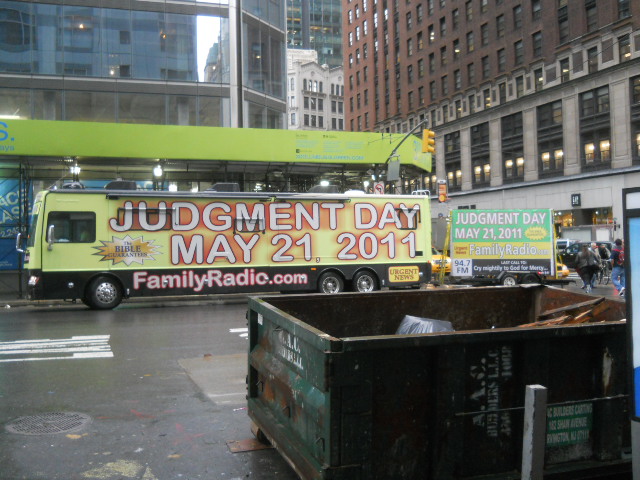