Today has been a rather ho-hum kind of day. After yesterday’s events, the Sounds of Hoboken, how could it not? Yesterday was a very good day, though my approach to it was filled with anxiety. Just the occasional fear of playing live in front of people who are there to see live music. It’s different from me just strumming on a bench with people walking by. This was something that was rehearsed for a few hours, taking the simplest route with the easiest chords, and familiar enough to know the words to various songs. Still, with all that preparation, it was butterflies in the stomach.

I had butterflies, or maybe caterpillars that turned into butterflies for a few days previous to yesterday. I practiced for a few hours with Rand on Saturday and it went well, whittling down the song list and trying to harmonize. It went well and with Bill at the second day of his 30th high school reunion I just sat at home watched TV and practiced some more. Bill came home, so happy. He truly enjoyed his opportunity to look at his past and to see how far he had come since 1982. He’d accomplished quite a bit.

We sat and talked into the early morning, he had so many tales to tell of going back to his old school and meeting students that are taking the same routes that Bill took when he was a teenager. IT was obviously a momentous occasion and I was more than happy to listen to him talk rather than think about playing guitar and singing with Rand the following afternoon. He soon went to bed and I stayed up a little while longer watching TV and continuing to practice on the guitar. Soon I was fast asleep next to Bill in our bed.

The next morning I was up and getting around, Bill had gotten up a little before me. I showered and shaved since I was scraggly. Art Hams were going on in the middle, after Trombolele- America’s Favorite Trombone/Ukulele combo, and before Stump Granny’s Violin, where a Teutonic Granny played songs on the violin and people will call out songs, and if Granny did not know the song, you would win a prize. I ran some errands after I had some breakfast and after a couple of hours, both Bill and I headed up to 14th Street in Hoboken.

Bill insisted on carrying my guitar and I wanted to walk up Washington Street to hopefully see some troubadours on the way. No troubadours were spotted but Bill and I did run into the lovely Meghan, one of my dearest and funniest friends. Her (our) daughter Lily had a set at the Guitar Bar Jr. at the same time Art Hams were going on so there was no chance that either of us could see the other playing. It was the same thing with a few other friends. They were playing somewhere else in town and it would have been impossible to see them play and be at the Garden Street Mews on time.

Meghan went her way and Bill and I ran into RoDa, Elly, their kids Logan and Autumn. We all ambled over to the Garden Street Mews where Lois was with Rand and Lisa. The people before us had a tent set up and were headed out taking their tent. There was no definite space to play and I suggested somewhere further from the street but no one else seemed to think it was a good idea, so we compromised and settled on being in the middle, where people can sit and watch.

Trombolele went on and were pretty funny. Amused in the mews. Some familiar faces showed up, some stayed for a few songs and some stayed for the whole shebang. Rand took off his Tyrolean hat but kept his pseudohosen on. We started with the B-52’s Dirty Back Road which we seemed to be playing on. Rand’s guitar had gone out of tune so I basically played the most between the two of us, which was fine. All together we played a little over a half hour which was fine.

People liked us, Bill recorded it and took tons of snapshots. Stump Granny’s Violin went on next and Granny was a trip. Very funny and everyone left with smiles on their faces. We were all pretty hungry and it was decided that we should go to Maxwells for food and some beers. And it was good. A nice walk, taking Lois home first, then Rand & Lisa and finally me & Bill, feeling nice. Bill was proud of me and enjoyed the whole thing which was good to hear. We settled in for the night, watching the Tony Awards which were great, thanks to Neil Patrick Harris.

I stayed up and watched Mad Men at midnight before going to bed and having a strange dream about the cigar shack. Today has been hum drum, overcast and muggy. I walked around Hoboken for a while this afternoon, seeing a few friends who also played yesterday. Each chat opened up with ‘So how’d you do yesterday?’ Apparently it went well for everyone. 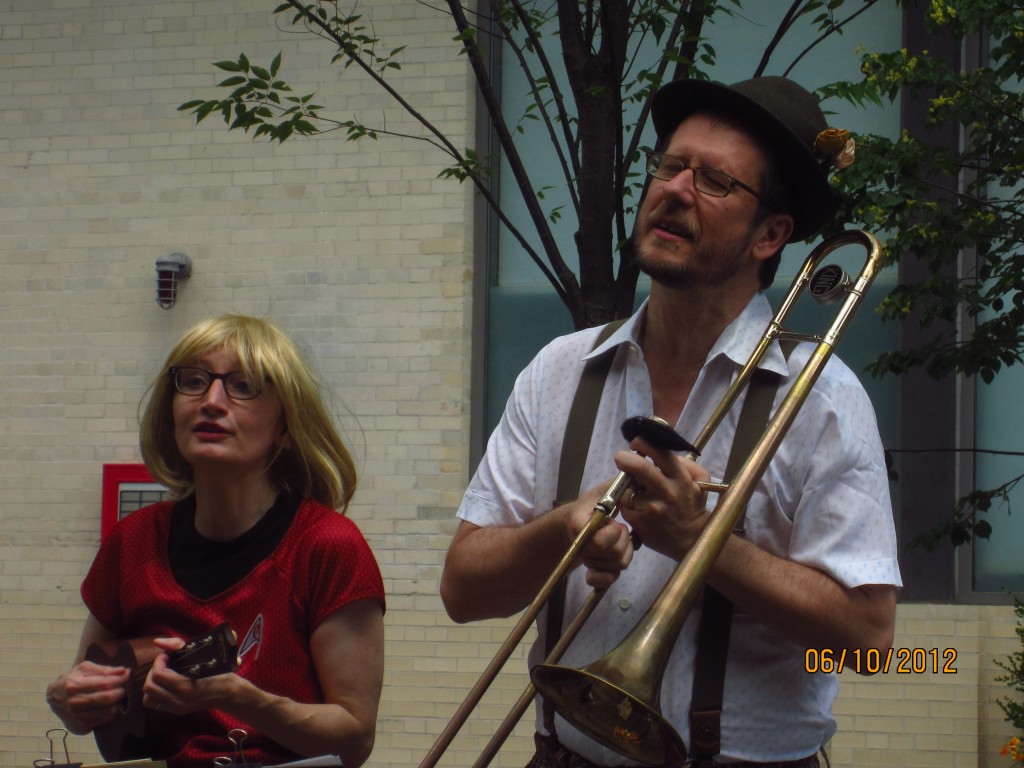 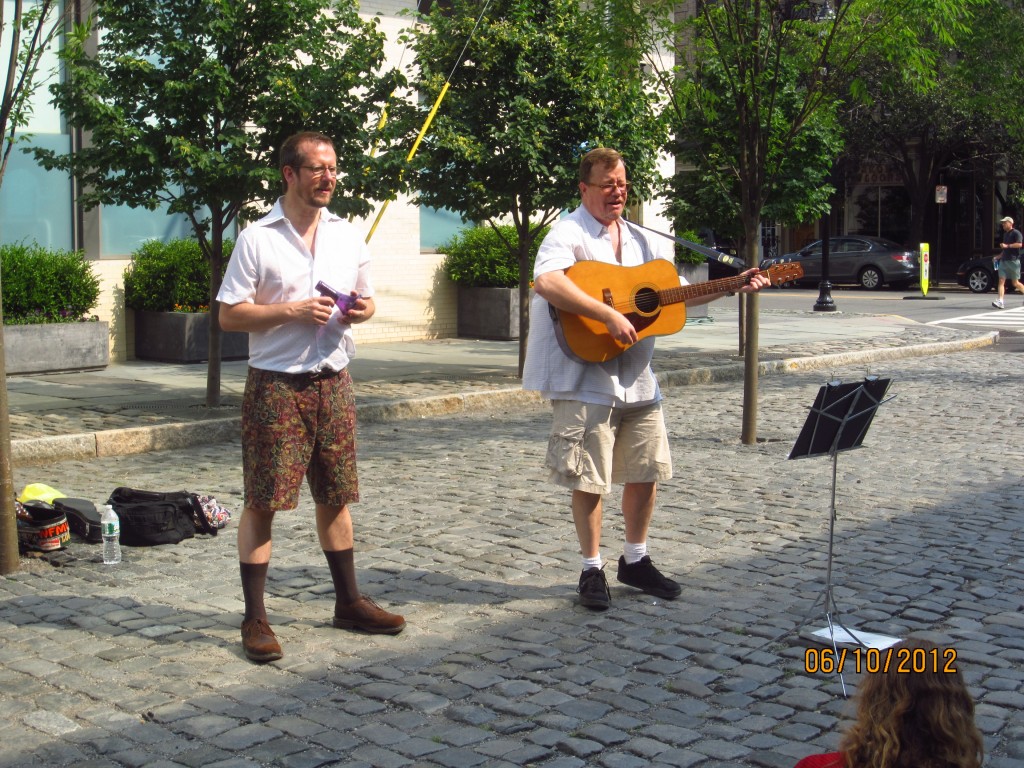 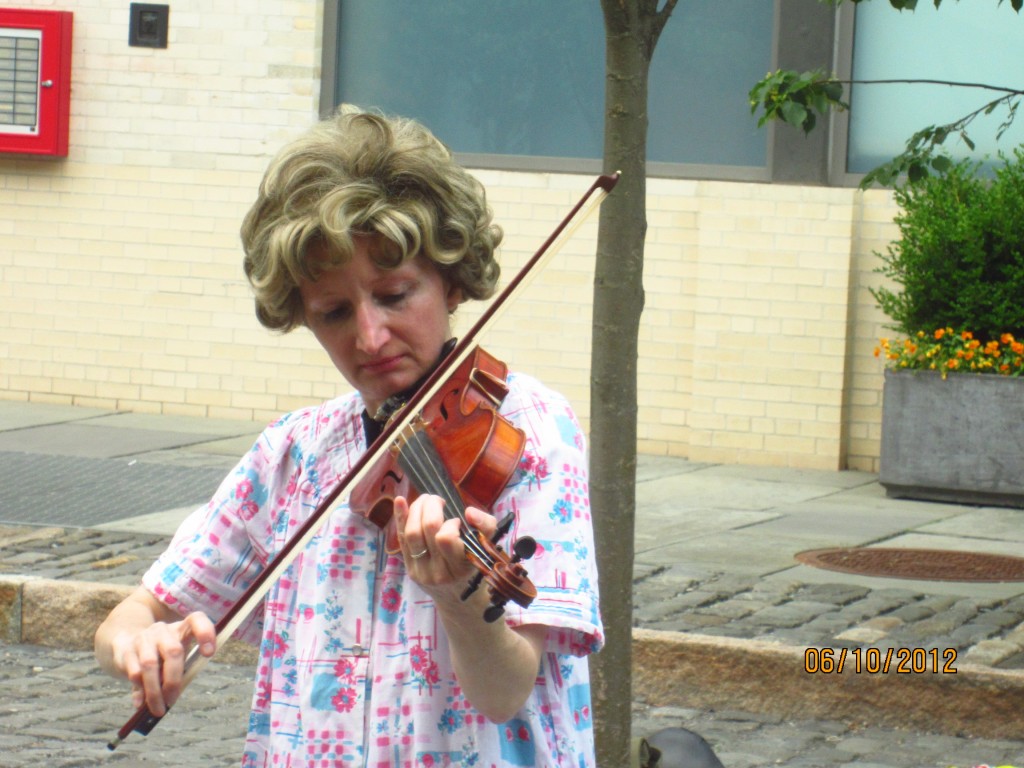 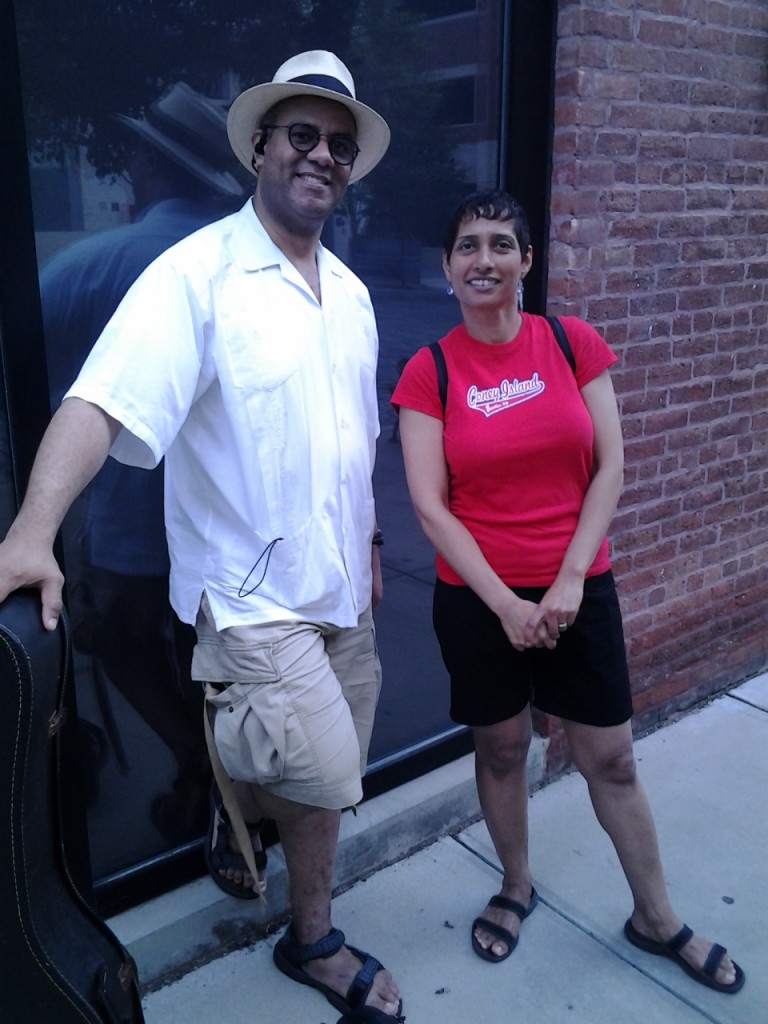 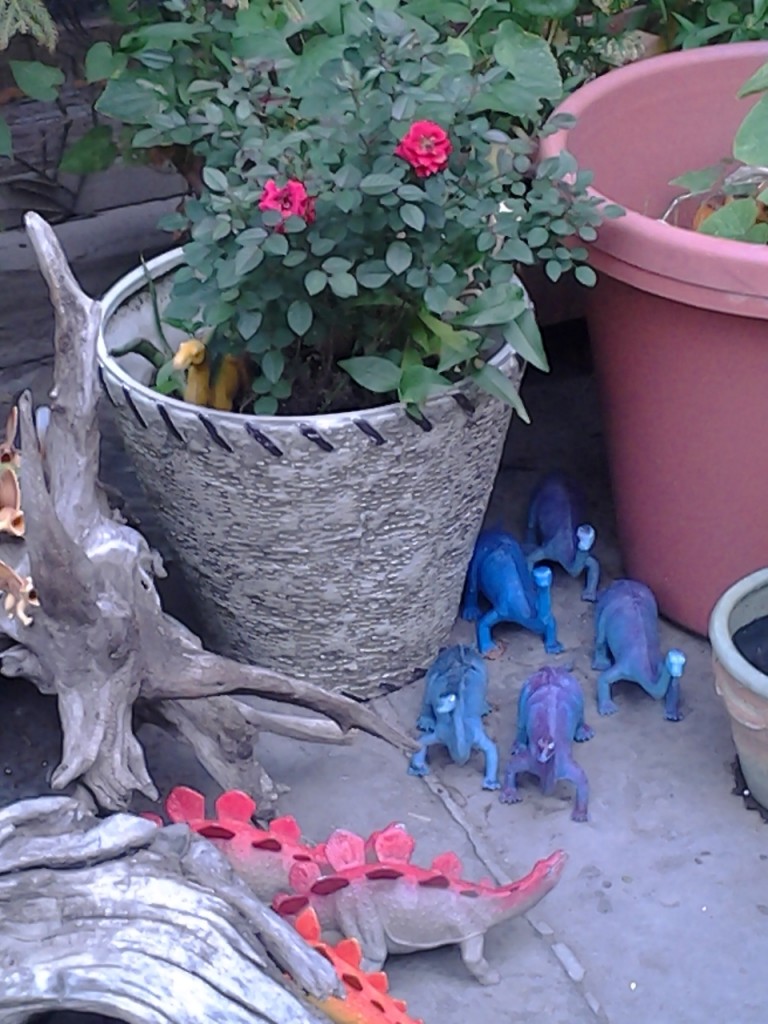 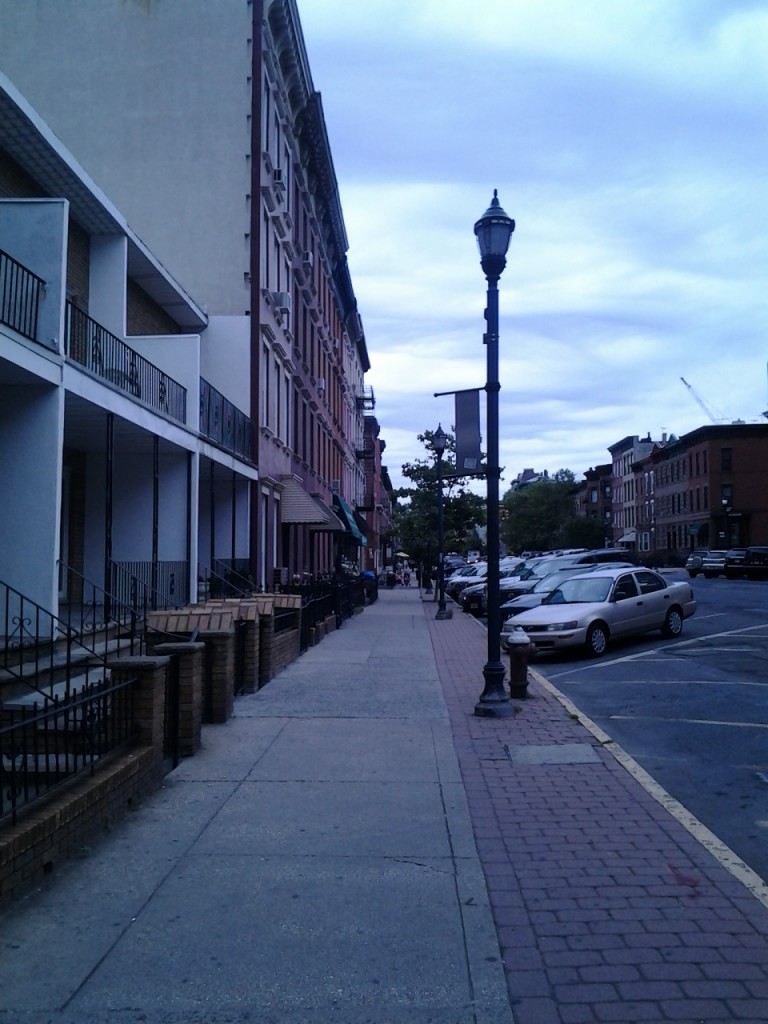 Well tomorrow is Sunday, June 10. It is the day of the Sounds of Hoboken. I will be participating with Rand as the Art Hams. The first time we have played together in 25 years. It all started the day I bought a Fender acoustic guitar from Jim Mastro, back in the day when Jim Mastro worked at We Buy Guitars. I was quite the Bongos fan then and thought it extra special to buy a guitar from a Bongo. Fred Smith from Television worked alongside Jim back then but I got more of a thrill from Jim. Fred I found intimidating.

I was working at 1700 Broadway and after work my co-workers and I went to McGee’s Bar across the street where they had a guitarist playing songs. Somehow I was prodded into getting on stage and playing along badly to ‘Dirty Old Town’, written by Ewan MacColl and around that time, famously covered by the Pogues. I heard it dozens of times on the jukebox but when it came time to play, I froze and did not know the chords and could barely remember the words. Then for some reason I forsook the guitar and sang Patsy Cline’s ‘Walking After Midnight’, which I did know the words to.

After leaving McGee’s I caught the bus to Hoboken and stopped at Maxwells for a pint. I was joined by Rand and we sat at the bar and talked with Martha Griffin. Martha, when not bartending had plans on making a movie. The movie was about a local band in town, Gutbank who we were all friends with. Martha was going to need financing and someone had the idea of maybe having a benefit to get some money for Martha’s project. It was quite a nice little family at Maxwells then.

I’m pretty sure Rand volunteered us to play at the as yet unnamed benefit and we set about a few days later practicing some songs. Covers that our friends would know and not expect. A Sex Pistols/Kinks/Butthole Surfers medley was worked on as well as some Elvis Costello, Ringo Starr, the Clash, Patti Smith and the B-52’s. And we also played back up for one of the waiters singing Marty Robbins ‘El Paso’ to the head cook who was in drag. We were also joined by Mike Weinert, formerly of local band Antietam on the washboard and assorted percussion.

It went over well, well enough that we were asked to play the River City Fair, a precursor to the Hoboken Art & Music festival. Somewhere between Maxwells and the River City Fair, we lost Mike Weinert and gained John Hamilton from another local band, Tiny Lights. John was and still is a consummate guitarist and before the fair, joined us at Maxwells. Rand and I were having a few drinks while John suggested that we shouldn’t drink beforehand.

We figured what did he know, and kept drinking some before heading to the river. It turned out John was quite right about drinking beforehand since when we hit the stage, feeling drunk and in the sun we might have made fools of ourselves though most people didn’t notice and basically enjoyed our short set. Rand and I were ready to pack it in, John Hamilton married and moved on. Now he is a professor at Harvard and I am sure playing with the Art Hams did not make it to his CV.

Much to our surprise, we were once again asked to play a show, this time an AIDS benefit for the Hyacinth Foundation in Asbury Park. It was our first and only out of town gig and we were driven by our mutual friend Susan Sher. Another friend Carol, joined us for the ride. On the way down Susan said that since we were going to play we probably couldn’t smoke with her. She wasn’t talking tobacco and we said of course we could. We followed John Hamilton’s advice and did not drink but we sure smoked a lot. Smoked Art Hams I suppose.

It was an even more abbreviated show, we were on so early that no one was really paying attention to us, besides Susan and Carol and Mary Fallon who helped set the whole thing up. And it was over before we knew it. It was painless and no one complained and we were happy to have done our small bit for the Hyacinth Foundation.

Now 25 years later we are at it again. I’ve been practicing my guitar for the past couple of years, and have gotten a little better since those first strums. Rand and I have gotten together for a few hours the past week to run down some songs and practice. Some songs are easier than others to play and where I’ve been able to master a few chords, Rand has had some difficulty so on some songs he’ll be singing or doing somethings while I play the song alongside him.

It should be fun, we’re looking forward to it. Rand will be performing with Lois as part of the trombone and ukulele duo, Trombolele. They’re opening up the set and Art Hams will be followed by Stump Granny’s Violin, with Lois dressed as a Granny taking requests and if she can’t play the request, you (or someone) could win a prize. There should be pictures and or video so if you can’t make it, we can still terrify you, one way or another, weather permitting. 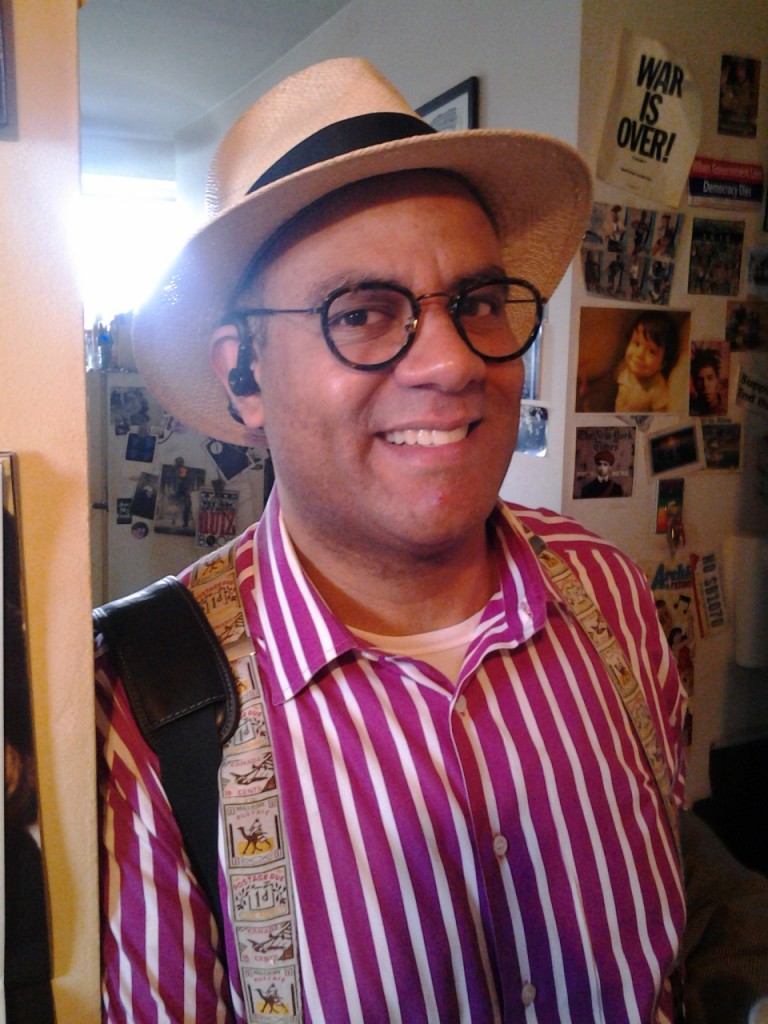 not an Art Ham 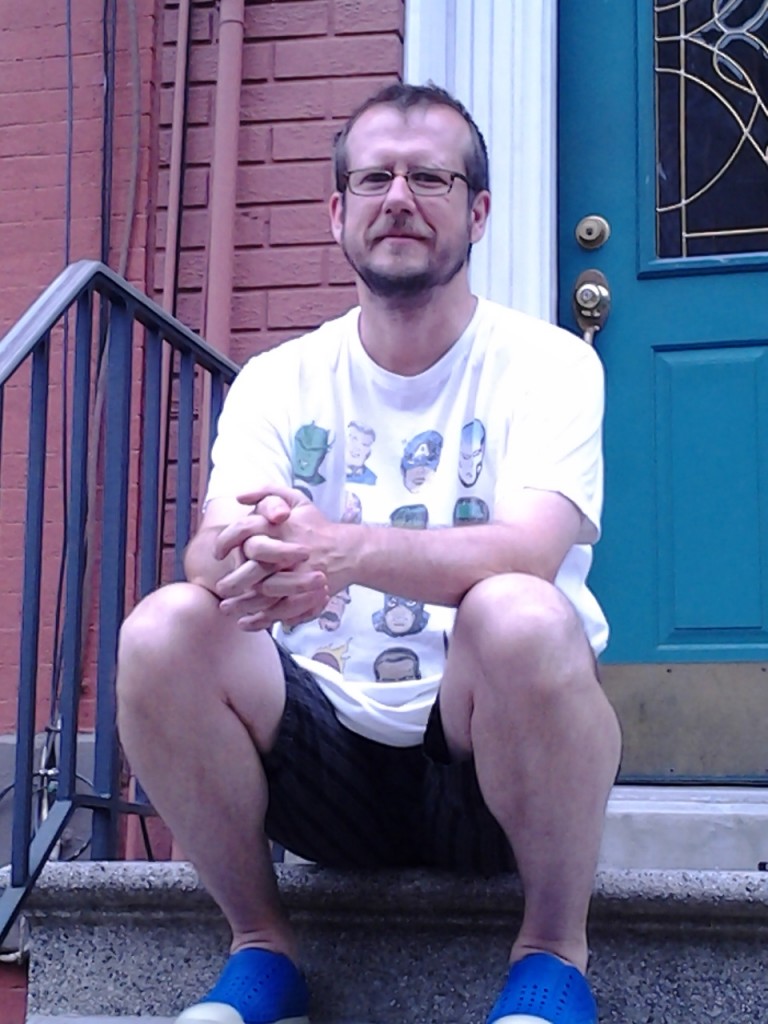 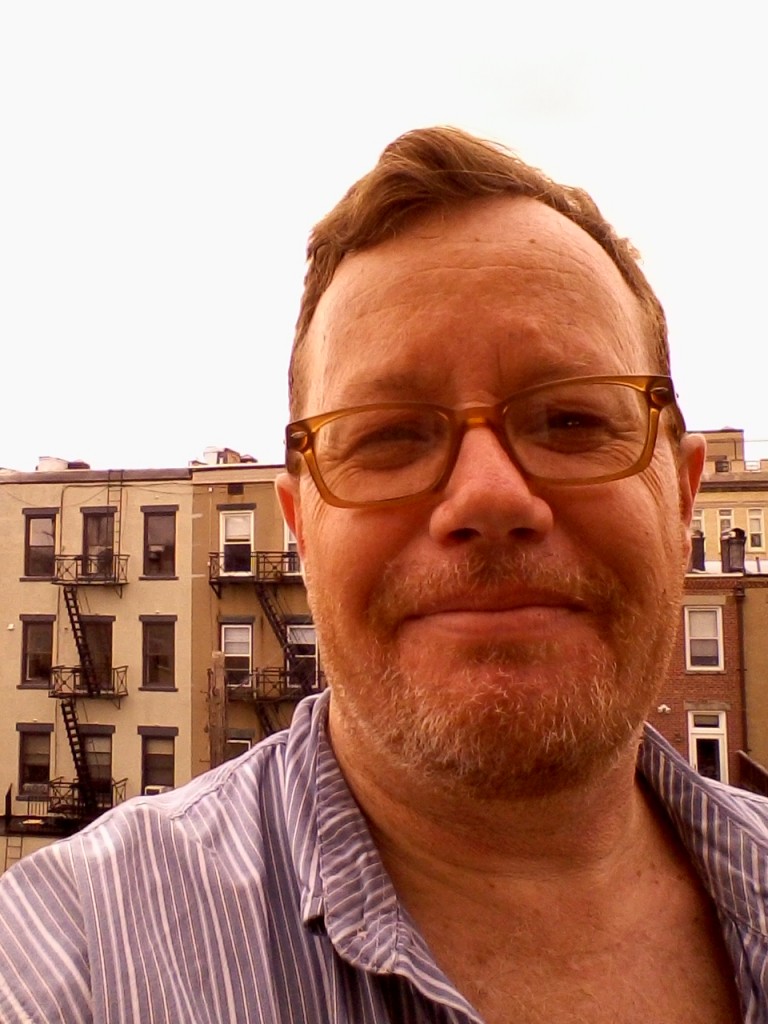 the other Art Ham