I came home and wrote, and ate dinner and burned Tumbleweed Connection, Madman Across the Water and Honky Chateau for Jim Mastro. Can I just say again that Jim Mastro is one of the best people on the planet?

I stopped by the Guitar Bar with the CD’s and asked him to show me how to change the strings on my acoustic guitar. He showed me once a while ago but I was probably somewhat addled and as you know, lately I’m not so addled.

So I paid attention this afternoon. I was just me and Jim in the store. I babbled and made jokes. Since there’s usually no one around to talk to, when I see friends I am usually so happy to have someone to talk to I am like a faucet that you can’t turn off.

It took Jim about five minutes whereas if it were me it would have taken an hour or more and I would most likely wind up bloody and possibly break the guitar from using the wrong tools to do so. Who knew you weren’t supposed to use a crowbar? Not me.

And Jim even adjusted the neck of the guitar which was great and something I would never have thought of. Oh he’s just great and I love him. Meghan Taylor is not only the funniest girl alive, but also the luckiest.

Now the guitar sounds brand new, and I’ve been enjoying it even more than ever. I did ask Jim what I owed him for the strings and he said three Elton John CD’s so I was fortunate to have those handy. He’s been working with Ian Hunter lately, and we talked about the Rock & Roll Hall of Fame concert on HBO last night.

We both agreed that Mott the Hoople should be in the Hall of Fame, Ian Hunter is 70 years old, still rocking and the idiots at the Hall of Fame should get their act together instead of fellating Bono. I watched the concert on TV last night, Jim didn’t.

I thought it was merely OK. I think the Rock & Roll Hall of Fame is a sham. Many great groups will never be in the hall. The people that decide who are in the hall are record company executives who sidestepped the tar pits and Jann Wenner.

It’s crap, but I watched it and occasionally watch the inductions from the Waldorf Astoria. True, some bands that I like are in the hall, The Ramones, Talking Heads, The Beatles etc, but David Bowie isn’t. It does give a bump in record sales for the artists so that’s good. And I did see the Rascals rehearsing when they were about to be inducted, thanks to Arif Mardin getting me in to the rehearsal.

Bowie turned then down from what I understand, feeling pretty much the same way as I do about the hall. Rock & Roll is free, the music of the streets, not some falsely hallowed hall.

First up on the show was Jerry Lee Lewis, playing with his Great Balls of Fire. I think the people were still arriving at their very pricey seats and not playing much attention to the Killer.

Then they wheeled out Crosby Stills and Nash. Not my favorites by any means, though I do respect Graham Nash somewhat, David Crosby a bit too, but Steven Stills is quite a burnout who from what I understand, thinks he was actually in the Vietnam War.

Not protesting it, but fighting in the rice paddies.

I was talking with Harpy on the phone while they were playing, surprised that Harpy kept insisting that Stills is still a great guitar player. That was enough for me to tweak Harpy and say that Stills may have been a good guitar player, but what has he done for me lately?

Harpy feigned being indignant. Maybe he wasn’t feigning but it was fun twisting Harpy’s pierced nipple over the phone.

Bonnie Raitt came out and she was fine. Jackson Browne came out and Harpy incorrectly said Jackson beat up Nico when he was going out with her in the 1960’s. When Jackson was 16. Wrong. It was rumored that Jackson beat up Darryl Hannah (pre Kill Bill, otherwise she would have mopped the floor with him) and Joni Mitchell wrote a song about how Jackson is a serial abuser, driving his first wife to suicide. Ouch!

In any event Jackson and Darryl never said anything about it, at least not to me.

James Taylor came out and sang Love the One You’re With with CSN. You know, the song that excuses cheating on your partner because they simply weren’t around.

Then Stevie Wonder came out like a breath of fresh air. He sang with Sting, BB King and Smokey Robinson. John Legend came out and they played The Way You Make Me Feel by Michael Jackson, causing Stevie to breakdown mid song sobbing.

The song carried on and then Jeff Beck came out and played Superstition with Stevie while dressed like Chrissie Hynde.

Paul Simon was next, along with Crosby and Nash. Stills was probably having Nam flashbacks. Then out came Dion followed by Little Anthony & the Imperials and then Art Garfunkel came out and sang a few of their hits and everyone clapped.

Aretha was up next looking good and sounding great. Aretha lost a few pounds and made a dedication to Ahmet Ertegun. Then Annie Lennox came out wearing a shirt that said HIV Positive. I don’t think she’s HIV Positive just showing awareness that anyone could be HIV Positive. They sang Chain of Fools and that was it for them two.

Then came Metallica, by which time Bill came home and said, ‘Is that Metallica?’ never knowing or even saying the word ‘Metallica’ prior to that.

Lou Reed came out and sang Sweet Jane, with a big picture of the Velvet Underground (Doug Yule version, NOT John Cale) projected behind Lars Ulrich. Yes, everyone has a Lou Reed story. He’s probably one of the most disputed men in rock & roll.

A love him or hate him kind of guy. John Cale said it best, ‘How could such a horrible person write such beautiful songs?’

Then out came Ozzy who sang some Black Sabbath crap, followed by Ray Davies who seemed like he couldn’t wait to get off stage, like he met Metallica for the first time onstage. U2 were next and to their credit had Bruce Springsteen and Patti Smith together singing Because the Night while Bono looked like a dork. Patti split, Bruce stayed and sang ‘I Still Haven’t Found What I’m Looking For’ with the band.

Bruce split and out came Mick Jagger singing Gimme Shelter with Fergie who may have hurt herself trying to imitate Merry Clayton’s vocals on the original. Some other Black Eyed Peas may have been on stage at the same time but you couldn’t tell.

Jagger was hilarious, being ‘Mick Jagger’. Mr. Low Percentage Body Fat he is. Bill was amazed, that this guy on stage doing those patented Jagger moves could have been Fergie’s grandfather, as well as Bono’s dad.

Mick split and out came Jeff Beck. Sting popped up again sang People Get Ready which Rod Stewart sang with Jeff Beck in an aborted reunion in the 1980’s. Buddy Guy came out and he was classy, Billy Gibbons from ZZ Top came out and played Purple Haze with Jeff Beck under a big projection of Jimi Hendrix.

Bill asked if all the guys from ZZ Top had beards and I told him out of the three guys in ZZ Top, only two have beards. The one who doesn’t is named Frank Beard. True story!

Then John Fogerty came out for Fortunate Son and Pretty Woman. Bruce and the E Street Band played Jungleland after Fogerty left, then out came the great Darlene Love singing A Fine Fine Boy.

Darlene left and then it was time to give the accountant some. Some guy looking like Mr. Weatherby from Riverdale High sat at the piano and sang New York State of Mind, sounding just like Billy Joel. Big finish with Born to Run and Jackie Wilson’s Higher & Higher.

It was a really long concert. A little over 4 hours. Bill went to bed, I stayed up and watched The Day the Earth Stood Still which was terrible.

It had promise but the plugs for products where overwhelming and the part of the little boy should have gone to a different actor rather than Will Smith’s son.

The part that really threw me was a scene where the major characters are speeding up Sixth Avenue to Central Park. Then they switched to that street in Los Angeles that they use for shots of Manhattan. Too many trees to be real.

Truly a crap movie, not even John Cleese could save it. 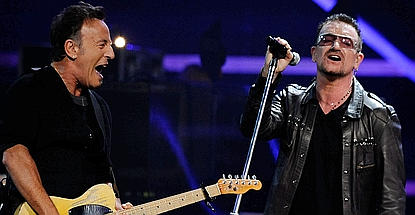 Bruce playing while Creed from The Office sings

2 thoughts on “Star Me Kitten”