A very cold Sunday. Snowed a bit last night, but not enough to stick around this morning. I watched Hancock last night. It was alright. Not very good. Decent special effects. After that I watched the first half of Saturday Night Live and that was merely alright too.

TI was the mediocre musical guest, John Malkovich was the guest host and he was a bit out of step with the rest of the cast it seemed. Good to see Amy Poehler back. But it wasn’t enough to make me stay awake until the end, wound up going to sleep after Weekend Update.

I recorded it so I can always catch the rest of it some other time. Slept until 8:00 and was out at 8:30. No contact with the Lopez family on the third floor despite my efforts of texting and voice mail.

Had an easy breakfast and was reading the papers and watching Barack Obama on Meet the Press when my niece Corrine called, letting me know that she was playing volleyball at Stevens Tech.

She told me about it yesterday and I asked that she call me when she had a clearer time of when she was actually playing. With 30 minutes notice I was soon in the bleachers next to my sister in law, Elaine cheering Corinne on.

They were doing well and with the help of two other spectators we made a four person wave which ebbed and flowed and may have helped Corinne’s team win a game or two. Well that’s what the two guys said and I was prone to agreeing with them.

After that Elaine and I walked up to Starbucks where we waited for my brother Frank to pick her up and drive back to Garfield. Frank being Frank was late by 45 minutes. Luckily we were indoors since the wind was bitter and cutting like a knife. I rarely go to Starbucks and on those rare occasions that I do, I don’t stay there.

Today we needed to be there and I don’t understand the protocol of the store. If someone is sitting at a table with three chairs reading the Sunday Times with various sections of the Times on the 2 empty chairs, do you ask the person sitting there to move their papers so you can sit there?

It didn’t matter since we did find a table that was quite dirty since the people sitting there just decided to walk out and not clean up after themselves. This Starbucks is at 12th and Hudson Street, which isn’t the same Hudson Street it was when Betti Cola was living above McSwells.

It’s populated with newcomers to Hoboken who paid hundreds of thousands of dollars for their condos, i.e., no one I know. Rude and self centered which seems to be the way of life up there.

The only contact I really have with these people is when they get on the bus in the morning upset that all the seats are gone and they have to stand.

Frank did show up I was dropped off in front of my building, Frank and Elaine heading back to Garfield. Nice to be in from the cold.

I have taken some photos but since I am on Bill’s Mac still I can’t figure out how to post them to this blog. I can make them appear as wallpaper though which isn’t what I want. Someday, perhaps before the end of the year I’ll be back using my computer and writing and posting online. I’m not holding my breath. 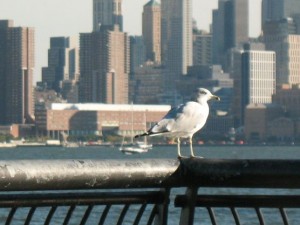