Sunday evening, dark at 5:30. Daylight savings y’all. Nice to get that extra hour of sleep, not as harsh as the clocks moving forward in the spring. Last night was a splendid evening. I thought I would be lat but as usual I was early.

A ton of people headed into the city on the Path train around 7:15. Rode in a crowded car feeling good. Some people were in costumes heading to various bars and parties, still carrying on the Halloween spirit. I was wearing my Obama as Superman shirt. Rode the train to 33rd Street and once on the street lit up a Padron and walked over to The Hammerstein Ballroom on 34th between 8th and 9th Avenues.

It was a beautiful evening as I puffed and avoided the Black Israelites on the corner of 7th Avenue. Sat on the steps of the ballroom when Bill showed. We sat and chatted, Bill telling me about his day and his friends. I suggested going for a pint before we went in and wound up at an Irish pub around the corner.

We sat and talked and drank our pints. A guy named Tom Gallagher came up to me and told how great he thought my shirt was. He was supporting Obama and we all toasted to Obama’s hopeful success on Tuesday. Tom was off to the show and we told him we’d hope to see him inside.

Bill was off to the loo and a woman asked me if Bill would be back as she was eying his seat for her boyfriend. I mentioned that we would probably be going soon. She too was going to see the B-52’s with her boyfriend and had the inside scoop that the band wouldn’t be on until 10:30.

It was 8:30 so Bill and I had one more pint, as well as shots of chilled Absolut Limon. Bill was analyzing the effect of the shot as he hadn’t had one in quite sometime. By the time we hit the street he was well lit. 2 pints and a shot did the trick as we queued up outside the ballroom.

After a wait of about 20 minutes we were inside, right in the middle of the dance floor. Hercules and Love Affair were the opening act and they were mediocre at best. No Antony thankfully, but not much in stage presence and the 2 dancers voguing at each end of the stage were fast becoming annoying. Still pockets of the crowd liked them.

The DJ was James Murphy from LCD Soundsystem and also Pat Mahoney of DFA Records which is LCD’s label I think. They played a nice selection including Pylon, Danger (Dub) and Soft Cell’s Memorabilia.

The B-52’s hit the stage with Pump, the first track on their newest album Funplex. High energy for sure. Everyone was dancing and the floor was going up and down. It was non stop energy with the strongest points being songs from Wild Planet and Funplex.

Could have used a bit more Funplex and I hate to say it but Cindy’s tour de force, Give Me Back My Man slowed the show down considerably. It was a quick recovery though and there definite moments like Pete Townshend once said about how a great rock and roll show will take you somewhere else.

Songs that were 3 minutes or so felt a lot longer and the grooves were quite infectious. It was good to see Fred and Kate flanking Cindy as they sang.

The band was tight and Keith made it a point to tell everyone to go out and Barack the vote. More comments from my shirt happened throughout the show and by the time Bill and I left we were quite spent.

Nice Path ride home and we were back in the apartment by 1:00 which wasn’t so bad for 2 geezers like Bill and myself. It was really a wonderful time and I hadn’t danced like that since we last saw the B-52’s indoors at Irving Plaza in 2002.

The set list was: Pump, Mesopotamia, Ultraviolet, Private Idaho, Give Me Back My Man, Strobe Light, Funplex, Juliet of the Spirits, Roam, Party Out of Bounds, Hot Corner, Love in the Year 3000, Love Shack, Planet Claire, Keep This Party Going On, and Rock Lobster. 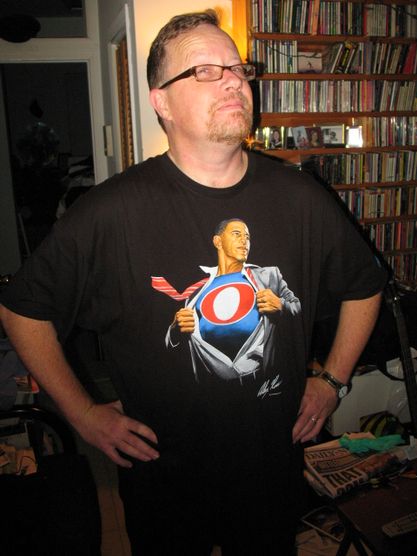 The shirt was designed by Alex Ross and I found that this Alex Ross is a popular guy, at least with some bloke I wound up talking to for about 20 minutes this afternoon while walking around Hoboken. It was a fun chat with the man named Lee.

He said if Alex Ross saw my face he could probably draw me as Green Arrow. I said ‘Oh great. I would be Oliver Queen. But at least he would be half right.’ I waited a beat and then said, ‘My name is Oliver.’ which got a bemused chuckle from Lee.

I wound up referring him to check out the Kirby Museum for info on Jack Kirby who he wasn’t sure of who he was, but if he was into comic books and around the ballpark of my age group, he’d more than likely would at least recognize the work of Jack Kirby. 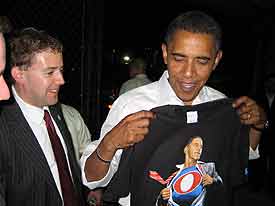