The woman on the bus next to me had killer morning breath. I wish I could tell her. She was too busy talking on her cellphone the whole ride back to Hoboken. And it was crowded. She possibly carried that morning mouth with her all day. I could smell it even though I just finished smoking a Padron 5000 Natural. Someone should have told her, but not me. I don’t know her or work with her. But I am the type of friend that would tell you that your breath stinks, or you have a snot hanging out of your nose. A bat in the cave as it were.

I heard from Marcus today. Actually I called him. I hadn’t seen him in years. He’s a true Rasta pal. I’ve known Marcus since about 1992, when I started working for Skyline Studios. Marcus was hustling on the street around the studio so naturally we hit it off. My friend Miriam and I hung out with Marcus, Jesse and the late, lamented Poncho. I remember the owners of the studio allowed me to have a small party in one of the lounges that weren’t being used. Miriam, the Rastas and myself, blazing away. One of the owners walked through the clouds, tsk tsk’ing, but nothing was said.

I hung out with the Rastas quite a bit, even after the studio was sold and I went to another studio. Marcus had many jobs and one of them was driving a dollar van up and down Flatbush Avenue, or Kings Highway. He was also the group leader of the Rastas and would put his stash in his van in Manhattan going to it on occasion to replenish supplies. After their work was done, meaning after the commuters passed by and picked up their needs for home, we would all hang out in the van getting quite jazzy.

I had the idea that I should drive since the police wouldn’t look twice at a white guy driving a van around midtown Manhattan rather than a jazzed up dreadlocked Rasta. It worked, we never got pulled over. I would just drive and drive around midtown and after an hour I would drop myself off a block or two from the bus terminal and get on line for my bus, not noticing that I reeked of jazz, and my eyes were quite bloodshot while wondering why people were staring at me. The dreads told me I looked Chinese. I was oblivious.

A few times I made it out to Brooklyn which was a major accomplishment. I went to a few parties, believing Marcus when he said that he’d meet me at some Ballroom on Church Avenue at 10:00PM. I would show up at 10:00 exactly only to find no Marcus there. One time I showed up on time and a large group of brothers were hanging out watching a boxing match on TV Everything stopped when I walked into the ballroom. I was the only white guy in the vicinity. At least the only one that wasn’t a cop. I was wearing a suit and tie because Marcus asked me to. Everyone else that went to these parties were from Guyana or Suriname and dressed to the nines, albeit flashy, so Marcus felt I should dress up too. But he wasn’t there yet, so he sent one of his brothers, either Clarence, Kenneth or Jamal to entertain me until Marcus showed.

He showed, and I soon left. Making the acquaintance of two young men on the train, headed for NYU. They didn’t know where they were going really so I instructed them to get off at West 4th Street. They were most grateful and when they asked my name I told them Allen Goldfarb.

This has been an experiment for myself since I heard that some people are tired of reading about my routine in the morning. Apparently I write the samo samo in the beginning. It usually gets me started and obviously I jump off from there. So no more bagels and papers, showers and cereal, at least for the time being. I also heard that there might be other readers besides Annemarie, Kathe, Harpy, Juan and Song. Maybe brother Frank, possibly Bill. So I am content with these seven. It would be cool if other people said hello in the comment section just to know who is reading this……hell, it would be cool if any of those seven wrote something in the comment box.

Looking into the future through a dirty window 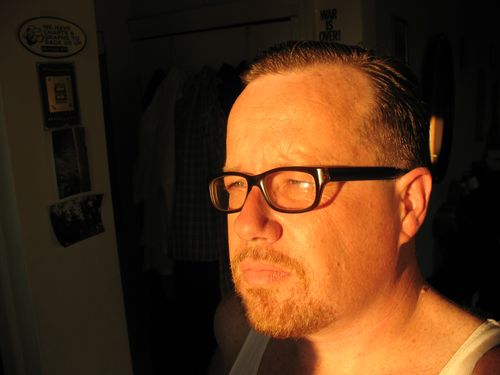