Haunted by last night’s movie, Rent. It certainly was touching. Seasons of Love and the theme, No Day But Today mainly. Those are the most haunting songs for me at least. The walk home produced the two pictures last night with Bill. It was a good walk. The bus ride was nice too with Bill putting his arm around my shoulders. For those that don’t play on my team, a move like that upsets some people, when it’s between two guys.

We came home, I wrote, he went to bed. That’s where the real fun began. I won’t get into detail, but wow…

Drank 2 bottles of wine with Julio over the weekend. I had the average two day weekend, most everyone else had a four day weekend. We polished off the second half of a big bottle and then after that, moved onto the good stuff. One of the partners at work gave me a bottle of Ahnfeldt 2002 Merlot from the Napa Valley. It kicked our asses. Apparently, according to what I looked up online, it’s a 44 dollar bottle of wine. And they only made 200 or so cases. So it’s not in our usual price range. We’re not box wine drinkers, nor are we the screw top variety.

Not anymore at least.

So this wine kicked our asses. Mine more so. We even ate beforehand. I cooked burgers on the George. We watched the Bob Dylan movie, “Masked and Anonymous’. I really enjoy that flick, if only for his playing with his band. Some handsome guys in that band, though I thought they looked corny when I saw them all those years ago at the Beacon. Patti Smith opened, and she was the reason I went.

Was not so much into Bob then. We split halfway through his set. Patti was amazing. It was actually my first time seeing her. She didn’t wet herself. Neither did I.

After the movie, Julio buzzed along and watched SNL with Steve Carrell hosting and Kanye West as the musical guest. A pretty good repeat. Probably wouldn’t have stayed up to watch the whole thing if it wasn’t for the wine and the company. I’m not complaining, both were good.

I’d like to think it was a hangover from the wine that tainted part of the day. I had gotten so depressed over my work situation. It’s dire, at least mentally for me. It prevented me from enjoying things like reading the paper, though that in itself is usually depressing. I couldn’t even bring myself to listen to music. Julio helped get me out of the house, and into the city.

Twice in a weekend is major. I hardly ever do that. Not that I hate the city, just lay-zee. I do enjoy myself. We went to Niwaka so I could pick up my ring after I had it cleaned. Very nice and shiny. Looking like brand new. I promised myself that I won’t wash dishes with it on anymore. Don’t want to be lacking in luster. I like Niwaka, they tolerate my Japanese.

Co Nee Chi Wah, Origato, Hi. And a lot of bowing. All very new to me. I say Origato and they come out with a whole bunch of new words in Japanese. I blush. Julio, who could have a future as a diamond merchant if he only applied himself, was talking to a woman about rings. A regular Suaron he is. After that we went to the Wine Bar on Wooster where we drank more wine. A hair of the dog.

Lewis Lapham is retiring next year. He hung out the Beatles in Rishikesh. How cool can this guy get?

Just got in from seeing RENT the movie. Very good. I always had a soft spot for Jesse L. Martin. I was working at Right Track Recording when they recorded the cast album. I met most of the original cast. Jesse was hanging out by my desk quite a bit, listening and singing along to “Who is He and What is He to You” by Bill Withers. Quite a handsome guy and with a killer smile.

He certainly looked great in the movie. I only had eyes for him back then so he commanded my attention most of the time. Adam Pascal and Anthony Rapp were very good. I really enjoyed Rosario Dawson. Idina Menzel was incredible. Wilson Jermaine Heredia was touching as Angel. Of course I got choked up at his final scene. I got choked up from the first notes of ‘Seasons of Love’ and then on throughout the rest of the movie.

Beautiful and touching. Would’ve been great 10 years ago but I guess Hollywood needed to see how well the movie version of Chicago went down. Since that was a hit, it gave Rent the green light. It also meant Phantom of the Opera got a green light too. Got to take the good with the bad. My memories of Phantom are unwashably tainted. For Rent, nothing but good memories. My fondness is cast.

In June I decided to take Bill and Julio and Stine to see Rent on Broadway. I had gotten four tickets and made plans to meet in front of the theatre. It was a sold out show, all these years later. Unfortunately it was raining cats and dogs. I was early and went to the Hilton and had a drink in their hotel bar.

After a beer I had gotten a call from Bill, he was at the theatre. Julio and Stine were on their way. I met up with them on the queue. We shuffled in and got to our seats where Bill was already seated. It was a great performance. The cast was credible. I was silently beating myself up for waiting to see it for so long. I would’ve loved to see the original cast, but this cast was quite good. Good enough to carry on after the originals had moved on.

And of course there was my drama that I had to contend with. AT intermission Stine and I went out for a smoke, Julio tagged along and Bill went to the souvenir stand. We came back and Bill was once again seated. He showed off the things that he bought, a hat, a T-shirt, an enamel badge. I wondered what he had gotten me, when all I had to do was close my eyes and I’d see what it was. Nothing.

I was hurt. Really upset. I had to come to terms with the fact that I couldn’t keep holding Bill to my standards of courtesy. It would’ve been nice to have gotten a button or something. But it wasn’t to be. I had to get over my frustration, I was learning about life and death and living for today (didn’t have a blog then). I was able to tell him about it afterwards and he really didn’t have a clue.

June was quite a dramatic month. I reminded him about how I had to go to court as I was being sued by the NY State Department of Labor. That was a long drawn out situation that involved Weehawken, San Francisco, New York and Hoboken. I showed at my court date, and sat among others who had their own trials. They had lawyers, and lot’s of files. All I had was me. I spoke with the judge from my heart and I was honest and truthful. A few weeks later I found the case was dismissed. The thing was with Bill, he knew I had the court date, but didn’t offer any words of encouragement, no pat on the back.

I told him that. I told him, if he had an audition for the part of a 95 year old albino woman playing Bingo, I’d have supported him 100%. If he were up for the role of a Puerto Rican bus driver he would’ve received another 100% from me. I needed to tell him that I needed his support that day and I didn’t get it. Homeboy with his problems of looking past his nose.

He’s making progress. He bought tickets for the movie tonight and surprised me with a RENT baseball cap, which he bought at the theatre this afternoon. I love it. We’re making progress.

No Day But Today. 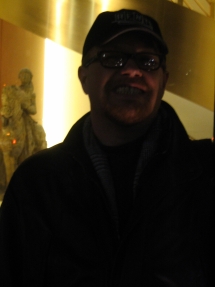 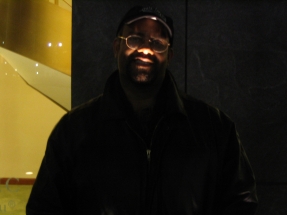