Well today is spring ahead, fall behind time. I usually set the clocks before I go to sleep but didn’t. I found myself sleeping in bed at 8:30 when the phone rang. It was Bill and it was actually 9:30. Not that I had to go to work, it’s just that I rarely sleep that late these days. No bother though. I stirred and got ready to head out in the world.

I checked my email to see if a poster that I ordered for Julio and Stine had been delivered and it was. I told Julio about it just as he was getting sick a week or so ago and I tracked the package that said it was delivered to Julio’s place of work. I called him up and he remembered that I told him about it being delivered to him. Everyone likes the poster of a kitten hanging for dear life with the caption, Hang in There Baby, Friday’s coming and I hope they’re happy with what I got them.

I also picked up some bagels and newspapers and visited Julio for a few minutes. They were trying to put Alexander to sleep so no seeing Superboy for me, and no Stine either. Came home and listened to The Bird and The Bee, Ray Guns are not Just the Future which is very good but Jenny Lewis’ Acid Tongue is really the best.

Juan turned me onto Jenny Lewis when she was in Rilo Kiley a few years ago. Now I have the music but Juan is nowhere to be found. I guess he’s doing alright. If he’s anything like I was when I was all those years ago, we’ll probably never see each other again. Nothing bad happened, just moved on to other people to hang out with. And so it would be perfectly understandable if he did the same.

Saturday Night Live was awfully funny last night, though Ray LaMontagne was a bit of a bore as the musical guest. Dwayne Johnson, formerly known as The Rock was hilarious and he’s a nice piece of eye candy. The opening number of him singing and dancing was a keeper for sure.

I also watched Oliver Stone’s W. That was engrossing. Apparently Colin Powell comes across as a flawed hero, Dick Cheney the evil behind the throne and Dubya of course conflicted with daddy issues and an empty head. It was interesting to watch if only for the impersonations rather than the story itself.

Elizabeth Banks was wasted as Laura Bush and Thandie Newton looked constipated as Condoleeza Rice. Bruce McGill reprised his role as D-Day from Animal House. No wait..he played George Tenet. It was like a car accident. You hated to look but with just a glance you couldn’t take your eyes off it. Recommended only if you have 2 hours to kill and there’s nothing else on.

Today I made a trip to the Newport Mall. Hadn’t been there in a while and it seems to have fallen on somewhat hard times. Not too many people there on a Sunday afternoon. I bought some boxer briefs (microfibers, yes!) and some socks. Doing my best to stimulate the economy.

I walked back to Hoboken, a nice walk on an overcast day. Spoke with Annemarie and Bill and I’m glad to be back on track with both of them. I think they’re glad as well. Back to work tomorrow, another 4 day work week. Ho hum. 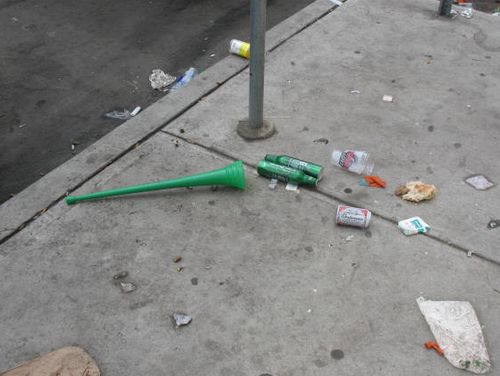 when the party's over...