And it’s been quite a nice day spent with my sister Annemarie and her son Earl. Earl is now 6’1”. Almost as tall as me, and as tall as Bill. A not so angry inch on this end.

I met up with them last night. They stopped here in Hoboken where we had pizza at Grimaldi’s. They can’t get pizza like that in Arcata. It was a quick stop before they headed up to Garfield to my brother Frank’s house.

I stayed in Hoboken, eventually going out for a stroll, walking off the pizza I helped inhale. Nice night smoking a cigar, listening to some of the London Calling album up to Lost in The Supermarket before switching over to the first side of Talking Heads: 77.

Bill came home a little after that, watched Lawn hors d’œuvre Criminal Relent up to a point when Bill switched into stage manager mode and hit pause on the digital cable box for about 50 minutes. He un-paused it when the news came on and his phone call was finished. The news was nothing in particular, mostly bad.

Then the Simpsons came on and Bill was off to bed, me joining him a little while later. He was off in the morning and kissed me goodbye as I lay in bed.

No work today. Annemarie called a little while later, checking to see if I was awake and also to see if anything was planned for the day.

At that moment I didn’t have any plans but after a cup of coffee I had an idea. A trip to the city and visiting some art galleries. Always fun to do and also easy on the wallet.

Anne and Earl rode down to Hoboken and found a spot on my block and we walked over to the Path, riding to 14th Street and walking up Fifth Avenue.

I had hoped to go to the Not Fade Away Gallery to check out the New York City 1970’s photos of Allen Tannenbaum. Despite getting there after 12:00 on a Friday when they were supposed to be open, they weren’t. It was just a little bit disappointing but other galleries lay ahead.

We walked down 20th street and wound up having lunch at the Rocking Horse Cafe which was good as usual. Then it was off to the galleries, first stop was a Stephen Shore exhibition.

In the 1960’s, Stephen Shore was a young man in his 20’s and took a lot of classic photos of Andy Warhol and the Factory crowd. I had seen some of the pictures in books but it was great to see them blown up in a gallery.

Then it was a hodgepodge of gallery hopping mainly from 22nd street to 24th and 25th Streets. Earl had gotten a phone call from a friend back in Arcata about completing his college registration today so I made a call to Bill and the three of us hopped in a taxi and rode up to midtown where we met up with Bill.

Bill was kind enough to bring his laptop down to the street where Earl worked the wireless connection and my cellphone and spoke to Susan, the administrative help at Humboldt State.

The process didn’t go as planned and Bill needed to get back to his office so we meandered down Broadway, saw a big chess game in Herald Square and hopped on a Path train back to Hoboken.

We came back here where I set Earl up on Bill’s Mac and I played DJ while Annemarie read some magazines and eventually catnapped. After Earl completed his registration, they were going to get some food in Hoboken before heading back to Garfield so I joined them for dinner at the Karma Cafe.

After that a quick visit to Julio & Stine’s apartment where they were able to finally meet Alexander who clearly loved being the center of attention. Still an adorable lad, running around trying to communicate.

I sat in the next room and read to Alexander while Annemarie and Earl caught up with Julio & Stine. A perfect finish to a perfect day. Simply a nice, nice, nice day with some of my favorite people.

And now, the pics 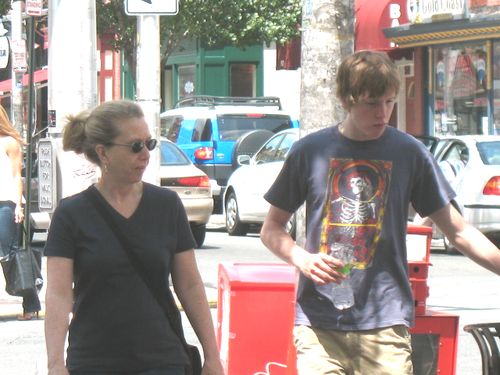 en route to the Path 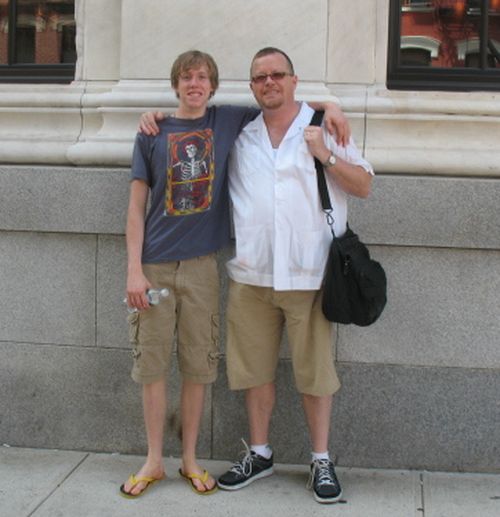 Earl & Me. Missing from picture, Cornbread. 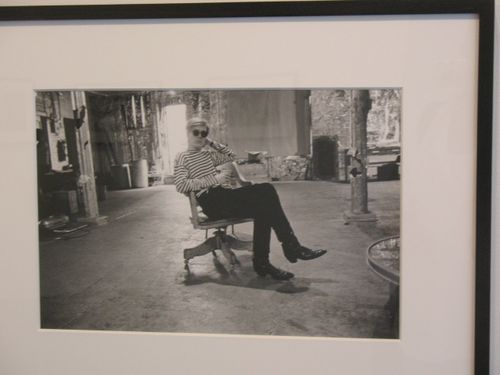 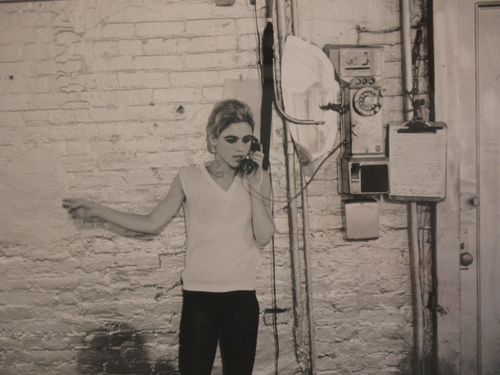 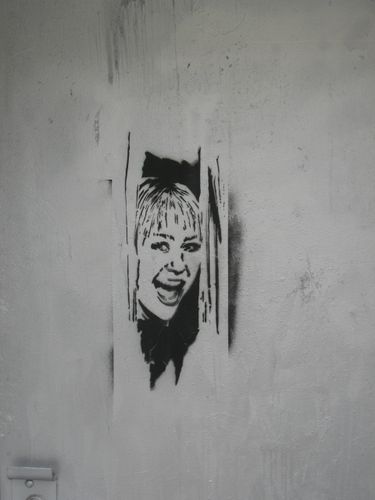 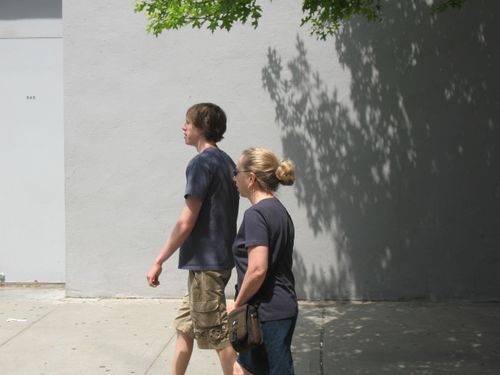 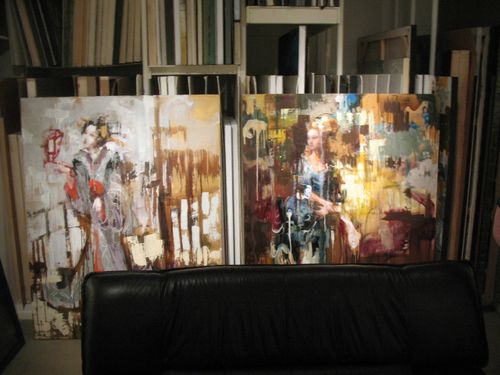 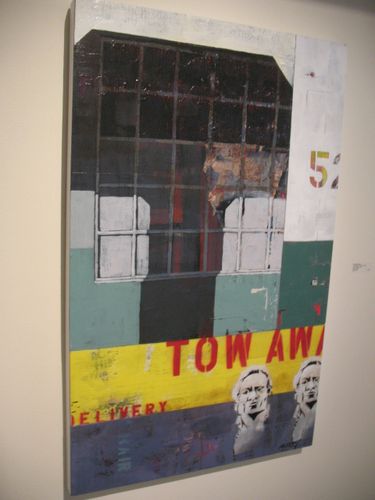 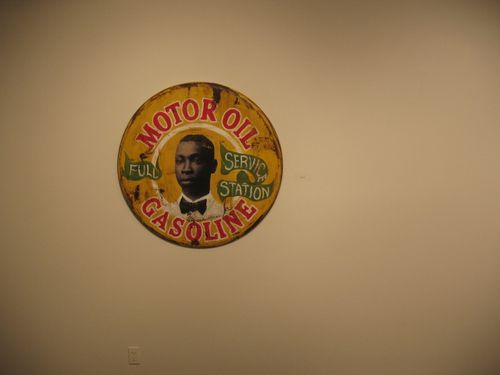 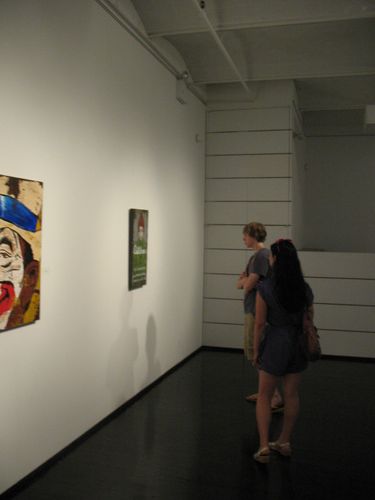 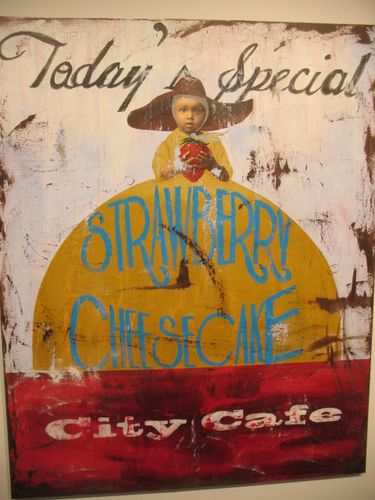 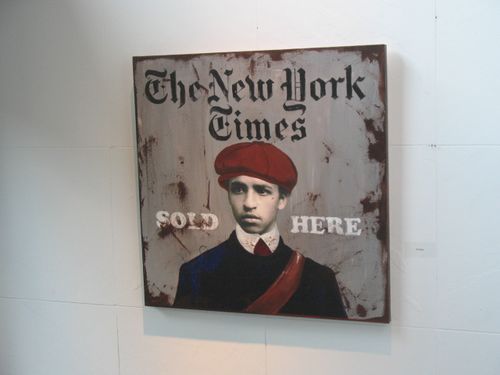 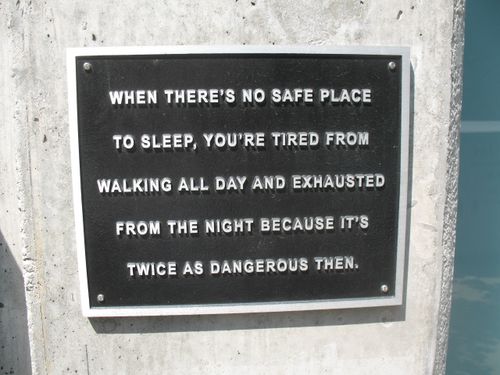 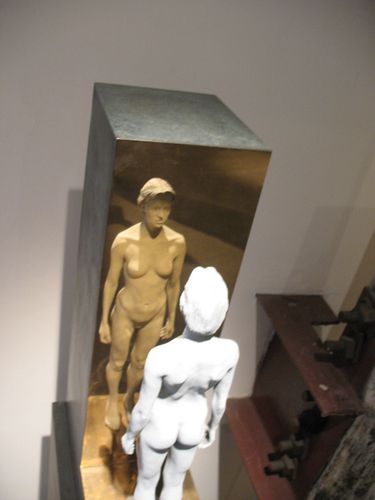 actually photographed this once before in a previous entry 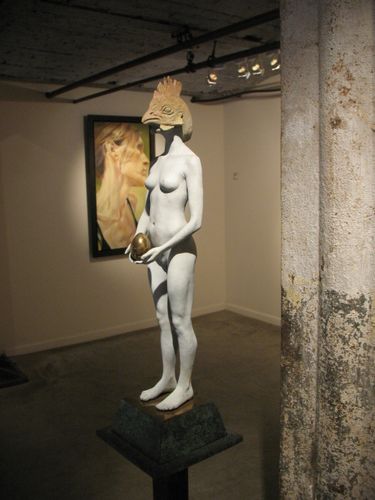 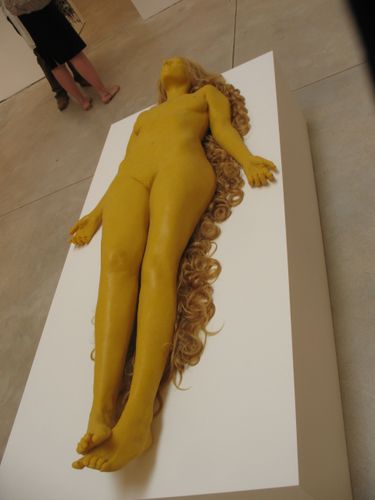 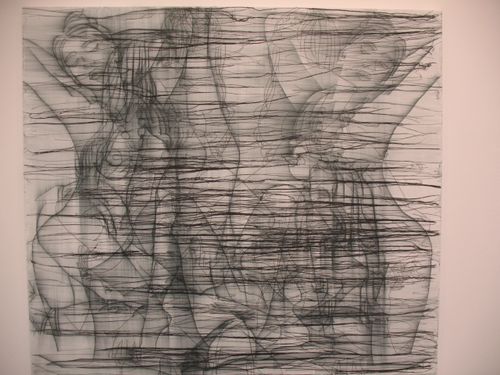 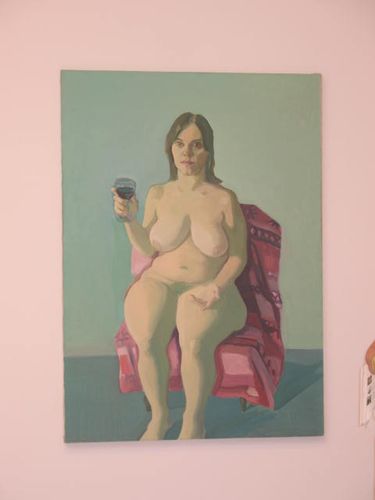 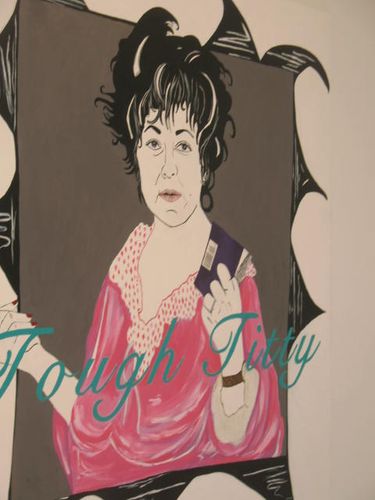 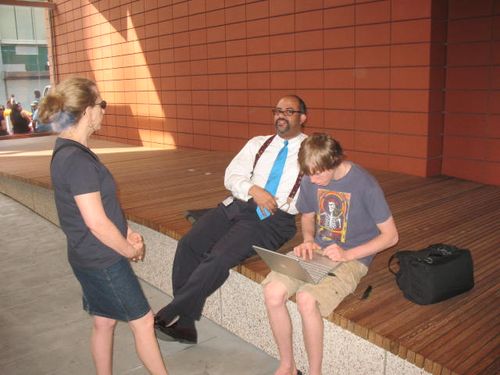 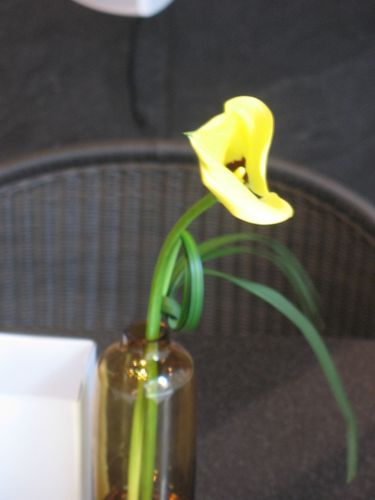 my homage to Mapplethorpe 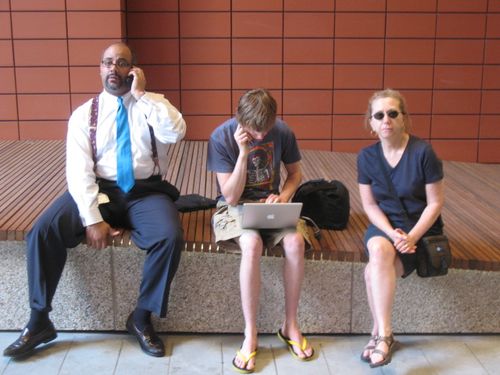 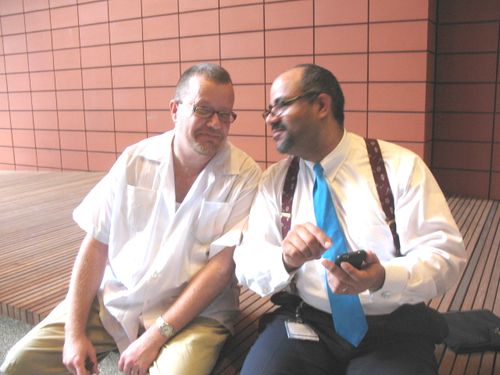 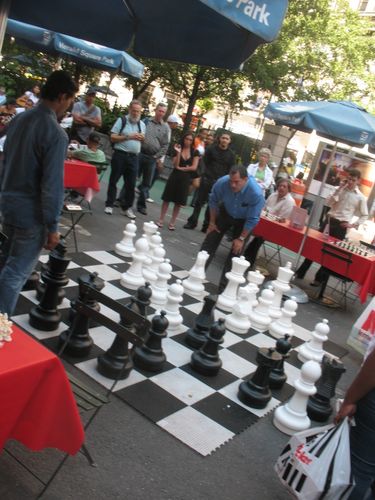 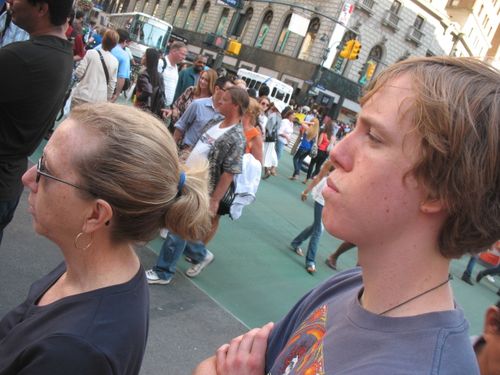 a mom and her son 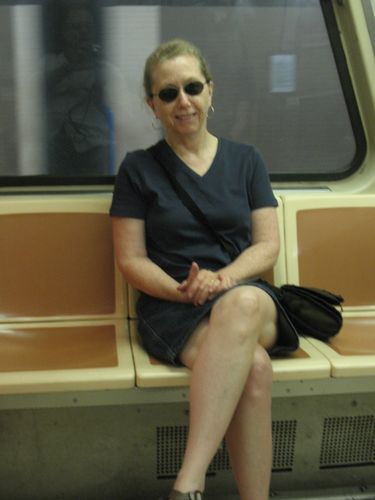 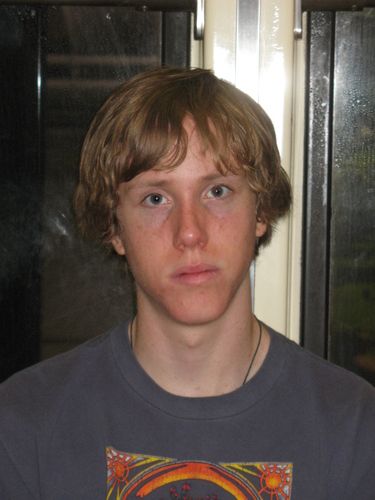