It’s 5:55PM on Bill’s Mac and I’m tired. It’s been an out of the ordinary day. But first a recap of what happened before. Watched Bill Maher last night, he was very good, Lincoln Chafee, Cornell West and Richard Belzer were the panel, Bill Frist (intelligent jerk) was the opening interview and Sarah Silverman was the final guest with the panel.

Her video on how to solve world hunger was the tops. A simple idea. Sell the Vatican, make the Pope super popular. He would be a superhero of sorts since he already has the cape and any Vatican involvement with the Holocaust would be forgiven.

With the proceeds of the Vatican sale all the billions of dollars could be spent solving world hunger. It would be the christian compassionate thing to do. Sell the house which is a city, take some of those proceeds and make a condo for the Pope and his friends.

It was as irreverent as only Sarah Silverman could be.

I recorded it so Bill could watch it, it was that good. I stayed up watching Craig Ferguson who really is the funniest guy in late night television. Then I went to bed, Bill sleeping under his apnea mask. At some point he took the mask off and started snoring, but by then I was pretty much far gone in slumber land to really notice.

I slept really well, woke up to find Bill about to go out and get the paper and some bagels. The laundry I did yesterday was still damp which required another day of it hanging around the kitchen.

He came back and hurried about trying to get ready for his stage manager gig for Amiri Baraka’s birthday event tonight. Not being much of an Amiri Baraka fan, I just made myself a nice breakfast and read the paper.

In fact one of them brought up how Nobel invented dynamite and what an odd fact that is. Of course anyone with an inquisitive brain knew this ages ago. But there they were arguing their ‘Obama wasn’t born here’ ‘the Socialist president’.

I had read somewhere that the Rock & Roll Hall of Fame Annex in Soho was free yesterday and today for John Lennon’s birthday yesterday. That’s seemed like a fun thing to do so I got my act together and headed into the city on the Path.

Swung by The Guitar Bar where the ever lovin’ Jim Mastro was back from England. He was the guitar tech for the Mott the Hoople reunion shows, having played with Ian Hunter on his solo gigs here and abroad.

The shows were a success, and Jim met both Jimmy Page and Mick Jones from the Clash backstage. Page was a contemporary and Mick was a Mott the Hoople fan from way back in the day.

I anticipated that the Rock & Roll Hall of Fame Annex might be jammed since it was free but it was only a 15 minute line outside and a 10 minute wait inside. Overall the experience was underwhelming.

The main exhibition was John Lennon: The New York Years and seeing his personal items was nice but no photography was allowed. And I thought that to be very odd. The final part was a paper bag behind glass, containing the clothes John was wearing when he was brutally murdered 29 years ago. But then again it was free so I really shouldn’t complain.

Now I’m back in Hoboken, tired and a little bit hungry despite having just eaten a bagel from this morning.

I have to get up early in the morning, like around 4:30 to be at 7th Avenue and 33rd Street at 6:00 for a 7:00 bus to Washington DC. It’s Bill’s suggestion that I get there an hour early since it’s sometimes a mess queuing up for the Bolt Bus.

And since Bill is almost always spot on regarding matters involving buses I’m taking his word. So a nap is out of the question. I’ll figure something out I’m sure.

Since I’ll be en route tomorrow and without internet access, you might expect a very late posting, which will more than likely be done on Monday. 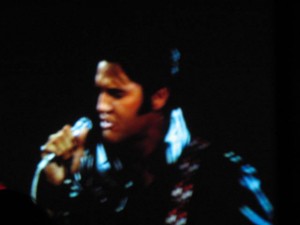 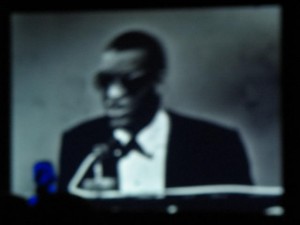 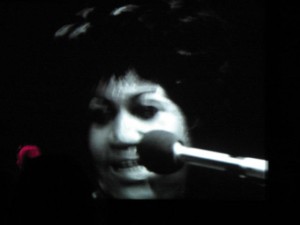 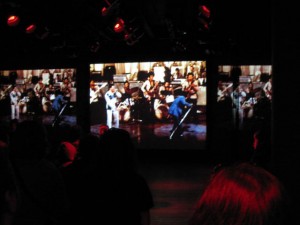 the last illegal photo before they stopped me. James Brown live.

I think Bowie is right. The Rock & Roll Hall of Fame is bullshit. There are tons of great, fantastic bands that will never make it into the Hall since it’s mainly all about who sold the most. And that’s not Rock & Roll!

And tomorrow is National Coming Out Day, so come out of the closet whomever, wherever you are!

It’s yet another rainy day. Woke up and it was pouring out. Last night it rained too. Rain rain rain. It’s tiresome. I hope it’s not like this when Annemarie and Earl come over from Arcata next month.

It’s always like this in Arcata and I think that coming east is an escape from that crappy weather for Annemarie and Earl. At the moment it has stopped raining but more is expected.

Last night was yet another mellow evening. Instead of the usual viewing fare, I watched The Public Enemy starring James Cagney and Jean Harlow.

It’s a classic, pre-code movie from 1931, the story of Tommy Powers rise to power in the world of criminal enterprise. I had never seen it before from start to finish and it was a good movie.

Just a little unbelievable was a scene where Cagney and his accomplice are running from a policeman who just shoots at them over and over while blowing his police whistle.

The chase goes around a corner where off camera the policeman is shot and Cagney and company run off.

It’s also the movie where Cagney smashes a grapefruit in a moll’s face. The moll by the way is not Jean Harlow but Mae Clarke. That is the classic scene.

As I watched the movie, there was a scene where Cagney and his buddy pay a visit to Putty Nose, someone who had done them wrong years before.

They want revenge and catch up with Putty Nose outside his home. They drag him in and Putty Nose realizes whats going on and tries to reason with them.

As I watched I wondered if that was where a line that was sampled by Coldcut on the remix for Eric B. and Rakim’s Paid in Full. ‘Back in the club, why you kids used to laugh at this song’.

Sure enough a minute later Putty Nose comes up with the line launching into the song and getting killed right before the chorus. I was surprised that I figured out where the line was from a moment before it was said.

Perhaps Tommy Powers mother was a little too loving, always willing to turn away when Tommy was up to no good, or when Tommy was getting the strap from his policeman father.

After that I watched some of Bill Maher from last week. I’m pretty sure that they use canned laughter a lot on the show since some of the jokes are just not funny at all.

And I’m not that fond of Bill Maher either, he’s too smarmy and way too fond of himself. PJ O’Rourke is another one I don’t get. He also laughs the hardest at his own jokes.

I’m sure he might have been funny back in the day when he was working at National Lampoon, but nowadays he’s merely a lampoon of himself.

Nothing to report on the work front. Nothing has changed. Still no info.

Tonight promises to be another quiet night. Which is better than pandemonium I guess. Bill just gave me the brush off, so maybe it won’t be so quiet after all.