Well today was a pretty good day. It started out nicely, Bill kissing me goodbye before he headed out around 6:00. I was up and out of bed a little while after that, close to 7:00.

I had the foresight to get my clothes ready and put in a garment bag the night before. Shower, shave, coffee and cereal and at 7:45 I was headed for the bus. Not too crowded, had a decent seat and the air conditioning was on.

I asked Bill last night if he had a garment bag I could use and he said they had them for sale at the Mens Wearhouse. I wouldn’t be able to make it there and Bill said he would if he had a chance. Headed uptown on the train and walked by the shop.

The lights were on but no one answered my knocking. I headed into the public restroom and changed there. Had about a half hour to kill so I wandered around the area in my suit, my street clothes now in the garment bag.

Tried calling Bill but T-Mobile couldn’t find a working network. That happened last night as well while at home. I made it back to the shop and saw Calvin. He was surprised that I was waiting outside. Apparently Marcus was inside the office and didn’t hear me knocking.

Harold, another co-worker showed up. He’s a handsome guy and a part time model. He showed me a photo of himself modeling for Calvin Klein underwear and I did not stare at the prominent bulge. He also showed me his six pack abs in person.

He’s off to South Beach for a modeling competition in a few weeks. I like Harold, he’s very funny. Raymond also came in. I met him when I met with Calvin and Marcus a few weeks ago.

Calvin and Harold said he had OCD and Raymond did not disagree. Apparently Raymond does a lot with the running of the shop and he’s good to turn to if I have a question.

We talked in the humidor about how it is to work there. He doesn’t mind making sure everything is running correctly. He’s a good ally to have.

Since I’m the low man on the totem pole I had to take an early lunch. I forgot to make a sandwich to bring to work so I finally went over to Whole Foods and made myself a salad which was really good. The first bite was incredible but I think I was just so hungry.

I sat on a bench near the park and after the salad smoked a cigar. An older gent walked by and noticed how I was dressed, white shirt, tie and braces and he remarked that I looked like a banker. I told him that I wasn’t, that I had been unemployed for 11 months and that I just started a new job.

He was happy for that and asked where I was working. I told him about the cigar shop and he remarked that he didn’t smoke cigars but wished me well and then he was off buying lottery scratch cards.

He was relieved after much scratching on one of the cards that he didn’t win the Shirley Jackson lottery.

Back to the shop on time and I found that Bill had stopped by with the garment bag. Everyone met him and liked him. How could they not? They also said they knew he was my man since we both looked alike.

I suppose after 10 years that would happen. I was glad they liked Bill and sad that I missed him but I think it was probably all for the best. They also sold Bill some cigars.

Like I said, it was a pretty good day.

Came home and found an email from Harpy saying that Rue McClanahan passed away. She was nice. I met her on the street in December 2005 when I was working at Wanker Banker. 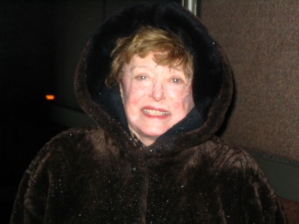 2 thoughts on “It Keeps You Running”