Ugh. So tired. How many times have I written that as an intro to an entry? Can I get a Bala Cynwyd auditor here? And maybe some choice Cafe Press items to peruse and perhaps purchase? I had a day off yesterday and this retail schedule is wrecking havoc with my body clock.

Today was arduous. Just very slow. I opened the store today, not by myself since they still haven’t trusted me with a key. It was me and Don Birch.

I stood outside for a few minutes knocking on the window trying to get his attention in the humidor. He finally looked up when I decided to call the store.

It was a slow start but in the afternoon the back room was thick with cigar smoke as about 12 guys sat around watching the World Cup. Raymond and Sean made it in for the 11:30 shift.

We make for a good crew. We can obviously handle things on our own. Calvin had off and we guessed that Marcus took the day off to make ready his wedding plans on July 11. No one from the store is invited and everyone is happy not to be invited.

A comment was passed on my music, specifically a track by Tricky, ‘Pumpkin’. It was said it sounded like music from an opium den. I guess that was supposed to be a bad thing.

Before my official lunch, I ate my turkey sandwich and for my official lunch went out and sat in one of my usual benches by the park, had a cigar and read the May 3 edition of the New Yorker.

It’s a very long article about a custody battle, murder and the trial that followed in Queens involving Russian immigrants from an obscure Jewish sect. It’s very involving and engrossing and so far I’ve been reading it for the past 4 days. Or maybe 3 days, my body clock being out of whack.

Back in time to relax amidst the cigar smoke in the back room. After that, the afternoon crawled yet again. In fact the last hour was so slow. Too much watching the clock on the wall.

I did not sleep well at all last night. I did sleep but had an angry dream with me being kidnapped to Orlando, Florida by my parents. My father oddly quiet, my mother passive. My brothers and their wives were there as was my sister and her husband.

None of their kids were there. I yelled at my mother that I wasn’t supposed to be there since I just started a new job and couldn’t afford to be there.

Just saw Chaz for a few minutes. He had a collection of clippings as well as Pride Magazine which has the photo of Bill and myself. It turns out Bill got a copy and scanned it to me this afternoon and now it’s my profile picture as well as Bill’s on Facebook.

In case you’re not in Facebook, here it is. 2 more days of work, then I am off for the weekend. 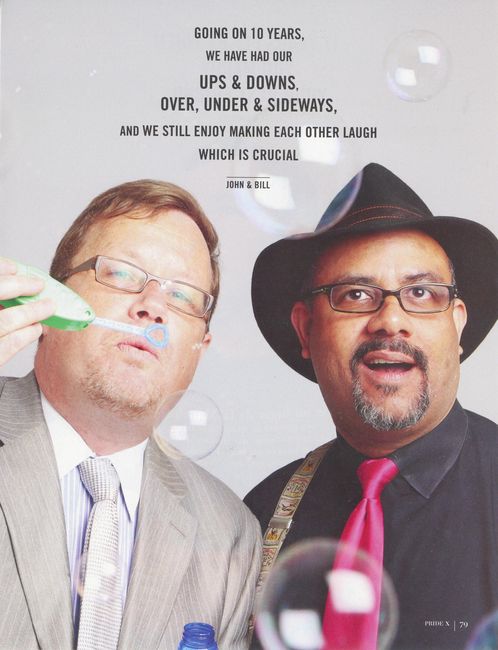