John zombie. Zombie John. Feeling OK. Feet hurt from standing for 9 hours. I work 10 hours and you can bet that one hour I have for lunch is spent sitting down somewhere. I’ve gone from living on the Internets for 11 months to not being able to go online.

It’s OK. Really nothing to worry about. I’m eating less and been more active. I found out today that I can access my email, but access to Facebook is blocked. That means I come home and my friends have posted 300 updates.

The routine thus far, or at least for the past week- I awake and get out of bed around 6:45 and do my thing which if you’re a regular reader know what that entails.

I leave at 7:45 and catch a bus around 8:00. I get to the bus terminal by 8:30 and catch an uptown train, dropping me off a little before 9:00. I find a spot to change into my suit and tie, usually wishing it was autumn and also muttering ‘fucking hell’ at least once.

Then I leave the building and find a shady spot to just chill out and drink some ice water. I drink a lot of water these days, which according to Harpy is a reason why he and I sweat like a pair of thoroughbreds.

At about 9:25 I can be found in front of the shop waiting for someone to let me in. Today it was me and Calvin until 11:30 when Raymond and Don came in. Calvin and I get along very well I think. He’s a nice guy and I genuinely like him. I haven’t seen his bad side though, if he has one. Everyone does.

Yesterday Raymond mentioned that when you work an 8 hour shift you’re supposed to get 2 15 minute breaks. Here, you have to mention that you’re stepping out for some fresh air. Calvin doesn’t say no and mentioned that he understands that breaks are needed and shouldn’t be abused.

I was able to take a break in the morning as well as in the afternoon. It being so summer-like lately the usual cigar smokers that come in and hang out until the cigar lounge closes at 7:00 do not stop by on Fridays. Most everyone heads out of town.

That meant it was especially slow this afternoon. We still have to stand there in our suits and ties though when we work on weekends, polo shirts are OK to wear as are guayaberas. Yay!

I have off this weekend and don’t have to go in until 11:30 on Monday. That means I’ll be working until 9:30. A new experience that will be.

It was so slow this afternoon that Calvin asked if I had seen the whole complex where the shop is located. I said I hadn’t only gotten as far as the second floor and he suggested that I wander around and see whats what.

It really is an impressive, albeit expensive complex. I made it as far as I could, the fifth floor and then wound my way back down on various escalators. With not much to do, time crawled. I did have a moment when I got back from checking out the complex to get my street clothes ready for a quick change.

When I told various friends and family that I would be working in a cigar shop, I think they envisioned that I would be smoking cigars all day. I thought that too. It’s not like that at all.

Calvin usually recommends a cigar to smoke when I take lunch and when I get back I tell him what I thought. And that’s about it, besides another cigar at the end of the day, when I walk down to the Path train.

Since I am working late on Monday I’ll be able to see Bill in a new play on Sunday night. Tomorrow is laundry and chores that I used to do at my leisure and trying to make a party for Rock & Roll Roger’s Honey tomorrow in Weehawken.

I get to sleep late too. Probably wake up around 8:00.

Also heard from Todd regarding the July party at Maxwells. It’s going to be in the front room. Which is a slight twist. More details to follow, but not tonight. John zombie. 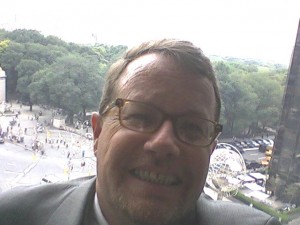 The weight of a metal world atop one of my shoulders.