Well I just got back from a really nice time in Van Saun Park, Paramus NJ. Stine organized a party for Alexander’s first birthday. Of course it was a splendid time. I rode up with Julio so we could move some picnic tables together. I was glad to be able to help.

Hadn’t spent time with Julio in a while so that was nice too. And of course I am totally in love with Alexander, who after spending some time together today, recognizes me. I had a blast playing peek a boo with him. Doing a number on his head running in one direction then back tracking, finding him anticipating the direction I should have been coming in and then surprising him when I would turn up where I had just left.

You had to be there. His squeals of delight were most charming and encouraged me to keep running around in circles to amuse the boy wonder.

It was mainly Julio’s family, his mother, & sister with her husband and their 7 month old twins. And his cousins who are also very nice, one of them saying to me that I was part of the family after being around for so long. I was also invited down to Julio’s cousin’s house in Brick NJ tomorrow but I think I will pass.

I didn’t get a chance to go to the zoo at Van Saun Park where I hear they now have a pair of mountain lions, no train rides. I figured out the last time I was at Van Saun Park was when I was sledding with a neighbor Scott Williams. His mother, the sainted Mrs. Williams had driven us there and I don’t know whether she hung around or just came back a few hours later, but I do remember one of the top ten songs was ELO’s Evil Woman.

Lot’s of good food, Danish and Spanish and all of it tasty and filling. Couldn’t get enough of Julio’s mother’s Potato Onion Quiche thing nor Stine’s Danish sheet cake in the shape of a boy and covered with candy.

It was a dry party as we were told by the park ranger that any alcohol would be cause for expulsion from the Shangri La known as Van Saun Park. Of course a few parties going on around us had surreptitiously snuck in some alcohol but we did just fine with out it, though once or twice Julio and I connived to run out and get something just for a lark. It didn’t happen though and we never saw the park ranger again.

It was a lovely time and I look forward to attending more of Alexander’s birthday parties as life goes on.

Last night I did make it up to McSwells after walking along the waterfront, enjoying a Padron that had got me buzzing quite hard, enough so that once or twice I was weaving as I walked along the river. I met up with Roda who told me the previous night he got drunk as did Rand which made me realize that staying home was the right thing to do.

I only had one pint of Guinness before heading home to watch Bill Maher with Bill Vila.

Quite a pleasant evening and I am quite pleased at how this weekend has been turning out.

Here are just a few pictures from this afternoon, of the boy wonder himself. Now I’m going back downstairs to have a Stella Artois with Julio and Stine while Alexander sleeps. 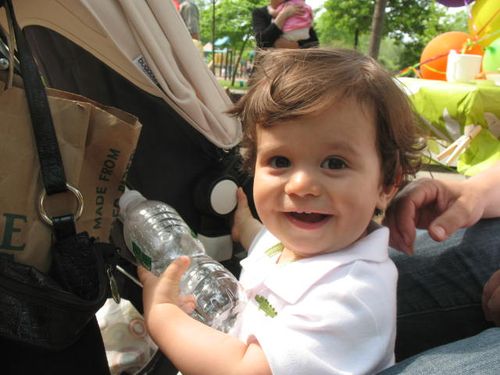 The computer is acting up so this is the only pic for now. More to come later as I’m running late to be downstairs and also CONGRATULATIONS to Casey Chasm!

As per Stine’s reasonable request, I will no longer be posting any photos of Alexander. It’s too scary a world and I totally understand.