Tuesday evening. A little drizzly outside but it’s ok. I’m happy that Bill will be staying here tonight in Hoboken. His mom was put in Beth Israel hospital for observation. It was the doctor’s idea. Bill wasn’t able to handle what was going on with her and this option seems to be the best for all concerned.

I guess it’s selfish of me to want Bill home with me, but it’s been a few months that he’s actually spent the night here. Bill’s mother won’t be wandering around on the street as she’s been doing the past week.

Last night I saw Watchmen with Harpy and it was enjoyable despite a crying baby midway through the showing. Who would bring an infant to an R rated movie? Idiots, that’s who. Then towards the end of the movie, I thought it was odd that Tubular Bells (the theme from the Exorcist) was part of the soundtrack.

It actually wasn’t. It was Harpy’s cellphone. He turned it off at the beginning of the movie as we were instructed but unbeknownst to Harpy, even though the cellphone is off the alarm will still go off regardless. That was funny and embarrassing.

I forgot most of the details since I had read the original comic books 22 years ago when they were first issued. Rand had gotten me an issue a month for my birthday. It was a complicated plot, not your average comic book superhero stories.

But from what I gathered and from what Harpy told me it was basically faithful to the original. ‘The most fucking amazing job’ Harpy just told me on the phone about the movie. I’d take a gander at the issues I had but I usually avoid issues from my past and these issues were lost in a few moves.

They could be floating around Lodi or possibly in a garbage dump, sorry Rand. Harpy is presently on the phone, raving about it more today than he did last night.

Last Friday when I was off work and before things got screwy I watched a little bit of Martha Stewart’s TV show. He guest was Q-Tip from A Tribe Called Quest. As they were making whatever it was they were making, Martha asked Q-Tip who his music publisher was and he replied that he was his own publisher, which is a smart move.

The money that’s made in music is generally through publishing, other artists singing your songs. But the thing is, who covers Rap & Hip Hop songs? No one really. A rapper usually raps about their life experience or a story, and the few instances I can think of are Duran Duran covering White Lines by Grandmaster Flash and the Furious Five and Tricky covering Slick Rick’s Children’s Story.

That’s about it for Rap covers I can think of. Young MC also wrote Wild Thing and Funky Cold Medina for Tone Loc but thats as far as that got. I’m sure there is a novelty record out there with Sonic Youth or someone else covering Baby’s Got Back. Filed under ‘Ironic’.

Work today was ok. Greg Stevens still in Arizona, Vivek somewhere in the southeast with his partner working on some new project, and Tom Chin has been quite nice lately, perhaps due to his retirement which I guess will be at the end of the month. I had to go to New Zealand Town, I mean, Chinatown to pick up some business cards for Vivek’s partner.

It was enjoyable to be out of the office and I got off the train at Bleecker Street and walked down Broadway to Howard Street in Chinatown. And like last night with Harpy stepping on my dress shoes, some neck bone stepped on my right foot at the corner of Prince Street. I of course gave him ‘the look’ which caused the neck bone to apologize profusely.

Still no word from my landlord about me cleaning up the hallways and the front of the building which is overrun with recyclables for the third week. All I’m asking is for a rent reduction of maybe $100.00 (which I never mentioned to the landlord) rather than him paying hundreds of dollars a month to a maintenance company that is supposed to clean the hallway but haven’t been here in months, or the moron down the street who’s supposed to move the recyclables and the trash to the curb.

I did take some pictures of the mess which I’ll include with the next rent check. Sooner or later he’ll get a ticket for having the front of the building in such an untidy state.

On my downtown travels, I looked into what was Farfetched amd took some pictures. I couldn’t see inside and this is what the camera picked up. 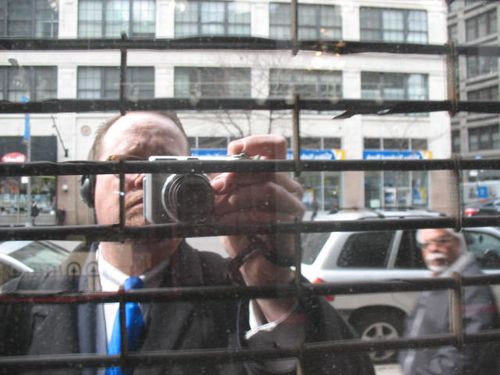 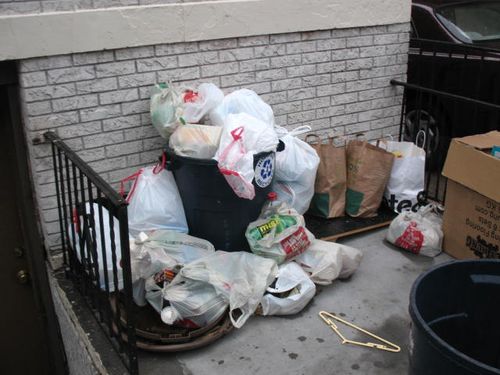