Yes, it’s a late posting tonight and yes I went out and had a few pints after work. And yes I have a good excuse. Being St. Patrick’s Day my niece Corinne and I have decided to continue something from last year, basically creating a tradition of going to McSwells and having a pint for this day of enforced Irish-ness.

Last year it was Corinne and I with her boyfriend who shall be known as Doofus. Corinne and Doofus are no more so he wasn’t around. Corinne’s mother, my sister in law Elaine joined us. It was good. Elaine definitely needed to get out and let her hair down. No table dancing, just some pub grub sitting at the bar and chatting.

A nice end to a decent St. Patrick’s Day. The day started ok, Bill telling me it was 6:40 as he lay in bed next to me, me telling Bill to go ahead and do whatever it is he has to do, I’ll keep sleeping. That lasted about 5 minutes once he got out of bed. I couldn’t sleep anymore so I got out of bed.

Bill was getting himself together, doesn’t take as long as I do since he just puts on clothes and goes to the gym. I shower and shave here, not being a gym person. I wore a double breasted suit with a green pattered tie and my late cousin Jackie’s overcoat.

Made it to the office a little after 8:30 which is earlier than it’s been the past couple of weeks. Quiet again, though on the street were occasional groups of people, mainly in green headed towards Fifth Avenue. The St. Patrick’s Day parade was scheduled at 11:00 and at 9:00 that was the destination, to get a good spot on the curb.

My day was quiet enough that I was able to go and check out the parade for an hour. That’s what I’ve been doing the past few years, checking out the parade on my lunch hour. Previous years had easier access to the parade route, but not this year. I walked over to 50th and Madison where I found out that I would have to go to 42nd Street or 55th Street to get to the parade.

I asked why they were doing it this year and the cop told me he didn’t know. I wound up walking up to 53rd Street where there wasn’t a police office controlling the flow of people to the parade. It wasn’t like Hoboken’s parade a few weeks ago. This was more subdued despite 5 times as many people. 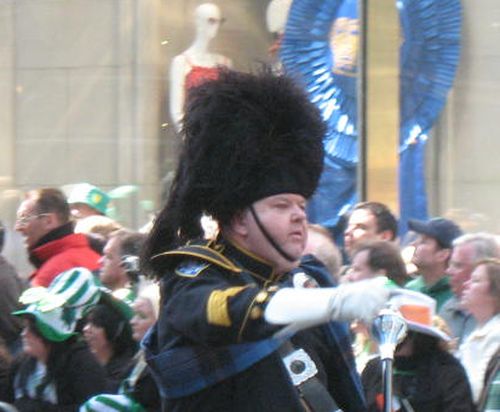 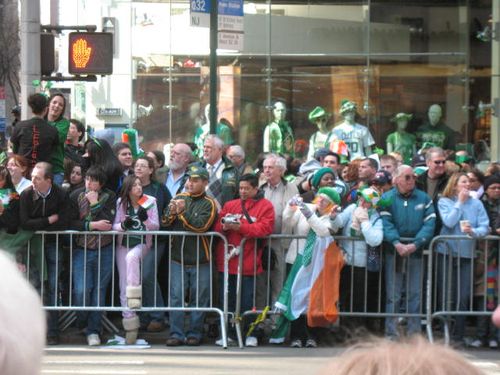 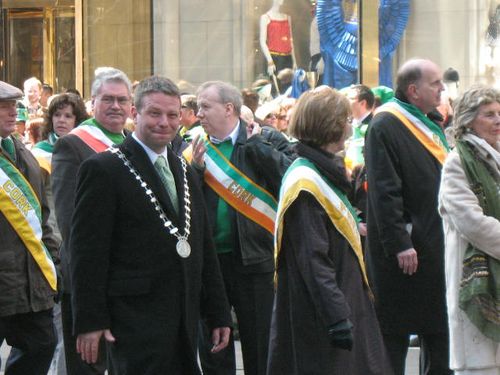 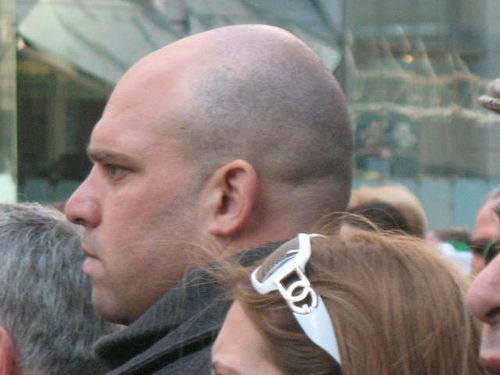 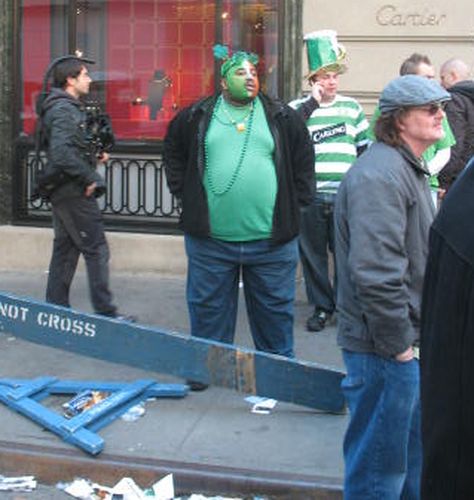 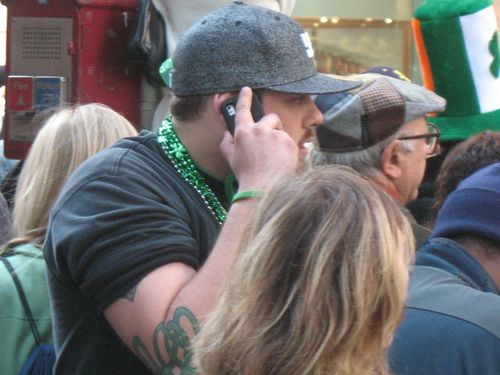 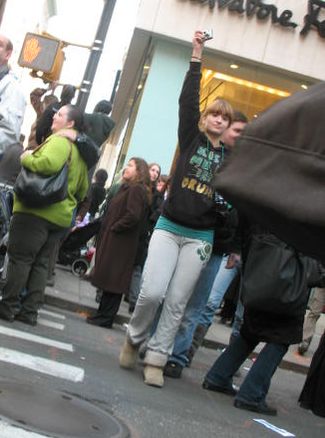 The weather was agreeable and I smoked a Padron and took some snapshots. I would have stayed longer but the batteries in my camera died after 48 pictures. Back to the still quiet office, looking around for things to do, things to pass the time. Somehow I did find things and soon enough it was time to go home.

The original plan was to meet Corinne at 6:00 so I took my time, enjoying another Padron, weaving my way through the crowds and saw Bill for a few minutes. He looked good in his green tie. Didn’t get a picture of him in his green beret and scarf. 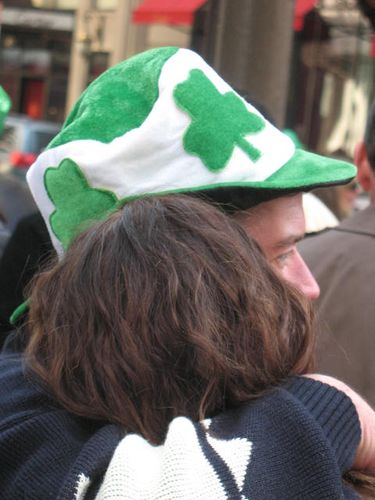 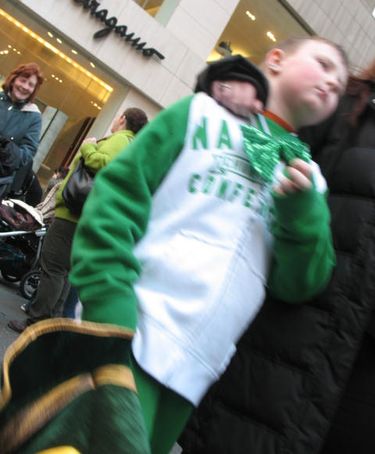 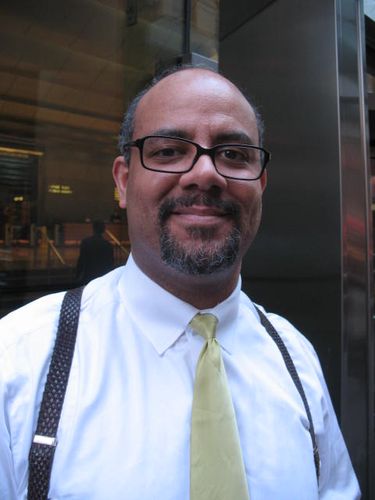 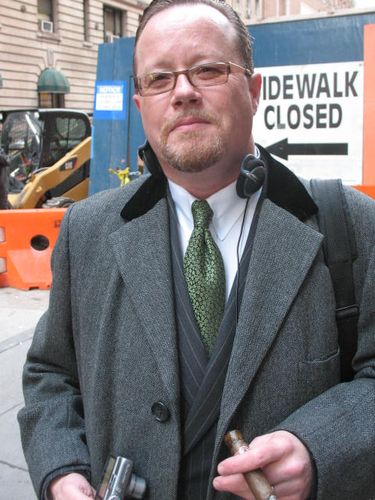 That’s how he dressed for St. Patrick’s Day. I had the green patterned tie and 4 leaf clover cuff links that I got cheap a few weeks ago. Got a pair for Bill as well.

Walked to the bus terminal, taking my time again. It was 5:30 when I got a text from Corinne asking if we could meet at 6:30 instead. I said ‘ok’ and decided to go home and change out of my suit into more casual fare.

Walked up to McSwells a little before 6:30 and got to the bar where it was fairly quiet. Not much going on which was fine by me. Elaine and Corinne were looking for a spot and I suggested parking in a garage, I would pay the cost.

It was $7.00 easily affordable but they had to pay once they got there so I was off the hook for that one. They showed up and we sat at the bar, eating and drinking and catching up. I had 4 pints, Corinne had 1 and Elaine had 2 Coronas.

Nobody out of control and after an hour or two it was time to go. A very nice, nothing over the top St. Patrick’s Day. That’s about it. No complaints. 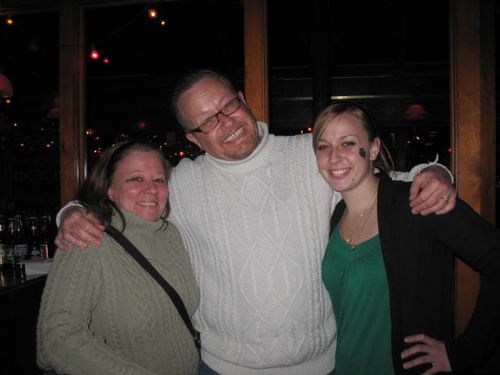