Well it’s an early posting today, so far at least. It also a rainy wet day. Nothing but rain. No mater how you dressed you were going to get wet. Last night I watched Daily Show and Colbert Report. Daily Show had Hank Hill’s father on it, Cotton Hill. No wait, that was John McCrazy. I couldn’t watch it so I played music while the old coot rambled on and on about what a nice guy he is. We know he’s a nutter and not trustworthy. And by we, I am including or incriminating you, dear reader. 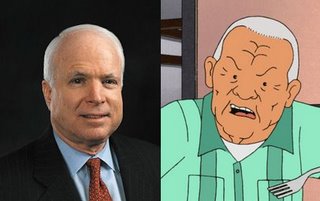 So far I’ve missed three weeks of My Name is Earl and Scrubs. I have them recorded so there’s not much to worry about in that department, if worry is the right word to use. I did watch The Office which hit the degree of being uncomfortable that it used to. That humor which is funny yet makes you squirm. Job fairs and golfing were the themes, with Michael making one’s skin crawl accordingly.

30 Rock was near madcap brilliance of course and that was due to Alec Baldwin once again with support from Matthew Broderick as well as Dean Winters playing Liz Lemon’s low rent on again off again boyfriend. No one can play sleaze quite like Dean Winters. And good old Kenneth trying to get to the Beijing Olympics with help from Jenna was cute.

After that was Lost which was pretty good, minimal Jack which is usually a good thing. Too convoluted a plot line to get involved with here, so I recommend you go to the Entertainment Weekly website for recaps and theories about the episode. Way too myriad for me. Went to bed, woke up not wanting to get out of bed but since I arranged for Lydia to have the day off so she can spend time with her Japanese Brazilian boyfriend, I had to go in.

For the first hour it seemed that I would be solo but as the morning progressed one or two people trickled in. A total of 5 people came in out of 10. Around noon, Vivek made an appearance, saying that I could go home around 2PM. I stayed until 3PM. I asked him about the receptionist position and he said yes, we would need one for the summer.

Then I told him what Greg Stevens had to say about it yesterday and he effectively turned the matter over to Tom Chin who once again doesn’t know what the fuck he is talking about. So the ball is still up in the air vis a vis Juan working for me during the summer. Sorry Juan, no definite answer yet.

So I left at 3PM, hopped on the E train to the bus terminal where I got in the queue for the bus which was surprising to see so many people who had also left work early. Luckily I got a seat, unluckily I almost got an eye poked out by a umbrella with a jerk attached to it talking to his friend about the most mundane topics. Perhaps if the subject were more interesting I wouldn’t mind getting stabbed in the eye.

He was so annoying that I got off the bus a stop early just to get away from him. I didn’t mind walking in the rain and I noticed he got out at the next stop. I could see his gigantic red and white umbrella in the distance as he tried to mange walking with an umbrella and talking on a cell phone at the same time. I easily overtook him as he fumbled. Made it home, dried myself off and here I am. That’s about it for now.

No one except for dear Harpy commented on the MOJO letter, he being just as confused by the header as I was. I emailed MOJO about it this afternoon, no reply as of yet.