Well I’m probably going to post later, it’s 6:53PM now. I thought I’d get started after I see Nick Lowe at McSwells with brother Brian at McSwells. It’s a foggy, balmy day always feeling like rain. Ran a few errands today around midtown and I heard a few people complaining about how cold it was. These people were spoiled last week when the temperature was in the upper 70’s. Work was interesting, a deal seems to have been made, a meeting went on all day long and when I left everyone involved in the meeting seemed content.

I had to go to the post office this afternoon for myself. I heard from the company that made the earphones I got from Julio and Stine this past holiday season, once again giving me an RA number so I can send back the earphones for the fourth time. I waited a short time on line then I got to the counter.

The Mailman behind the counter asks me:
‘Name 4 US Presidents not buried in the US.’ I answered correctly.

Then he said, ‘There is a race, and you overtake the guy in 2nd place. What place are you now in?’
This I answered incorrectly.
Finally, he riddled,
“There are 2 coins that add up to 30 cents. One of them is not a nickel. What are those coins?”

That one I knew from Scrubs, and no, it’s not a penny and a button with 29 cents written on it. It actually made for an interesting and fun experience at the post office for once. I did wonder, that if I hadn’t gotten any of the riddles right, would he refuse to handle my mail? It was reminiscent of Monty Python and the Holy Grail, crossing over the Bridge of Death. I would have been prepared, I know my sparrows.

What are your answers?

Well here we are later, and by ‘we’ I mean the royal ‘we’ and by that I mean ME. Several pints later. I really don’t do this that often, despite being in quite a similar state last weekend. By this I mean, drinking. Nick Lowe, very good. Excellent, in fact. Sold out show, jam packed. Also found out the secret word to tell the door people and get you into a sold out show. Me, 3 sheets to the wind. If it were 4, you would not be reading this. A good time had by Brian and special guest Chaz. Chaz duly writing down each song for his endless compilation.

I wound up going to bed immediately after writing those lines. Couldn’t focus and my fingers weren’t doing what I wanted them to do. Sleep uneasily, of course. A number of pints will do that to you.

Saw Roger, Ira Hubley and Georgia Kaplan as well as Thaylor and her husband Tom. Nick Lowe sang his hits, I Knew The Bride, Cruel to Be Kind, What’s So Funny (About Peace, Love and Understanding) as well as some new ones which were quite good. He’s very personable on stage, telling stories about his tour. He mentioned that it was the first time he was ever in Hoboken, after touring the US for the past 30 years, which was somehow fitting since it was the last night of his tour. Brian gave me a ride home and that is where I am now, waiting for Julio to play the role of Egg Man on this foggy day in Hoboken town. Sorry you had to wait, but the bottom of those pint glasses were so engrossing.

Here’s the best pic of the Basher himself. It’s a bit blurry but then again, so was I. 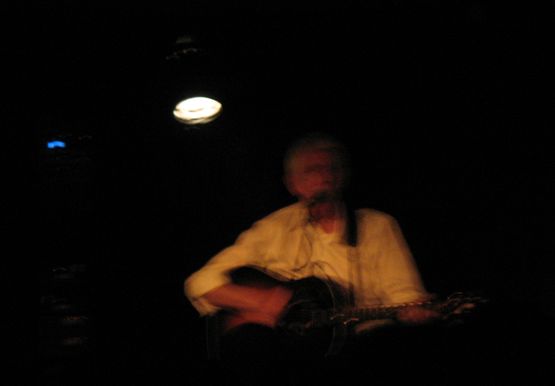 Yes I finished this this morning, and since I started it last night, I’ve post dated the entry.