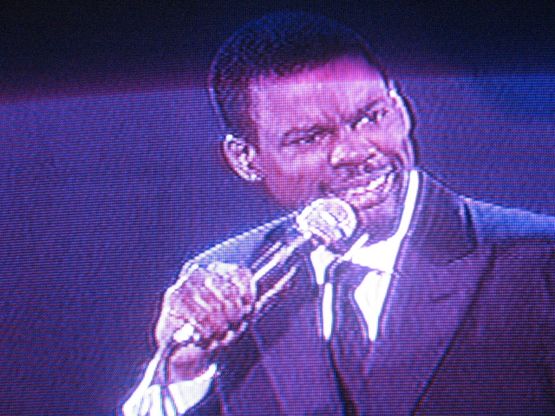 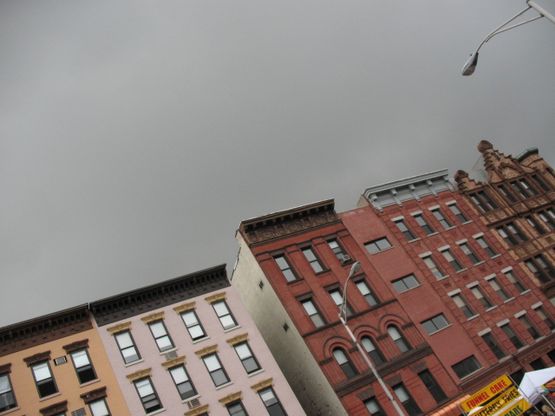 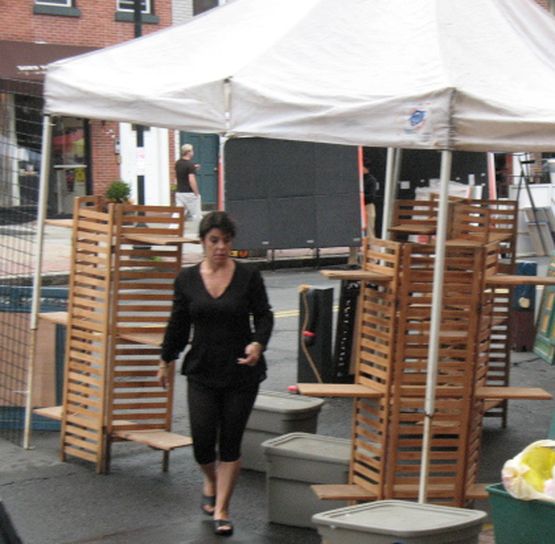 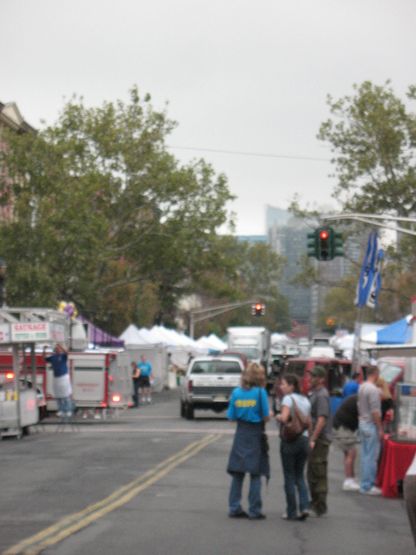 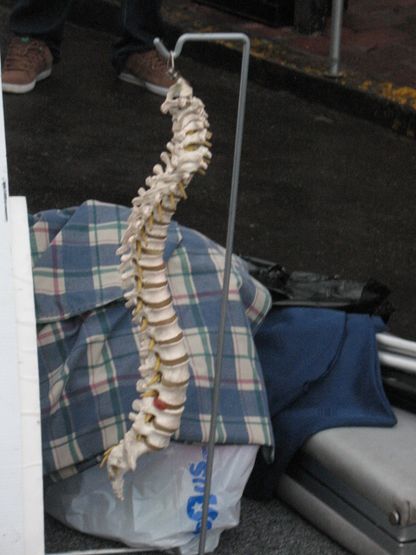 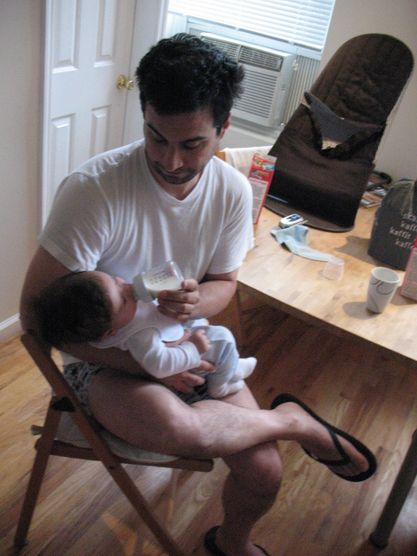 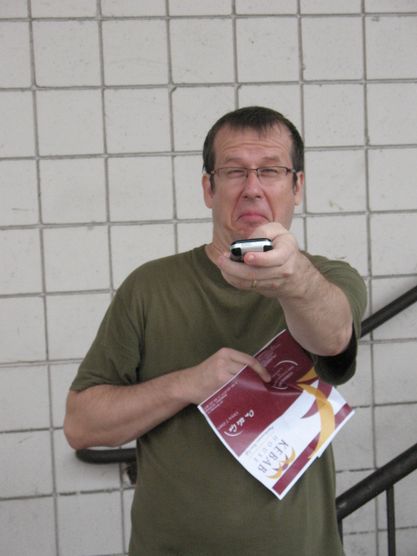 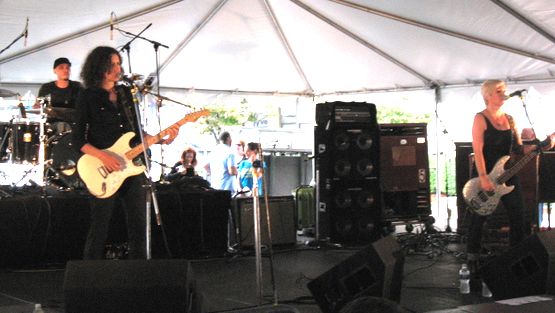 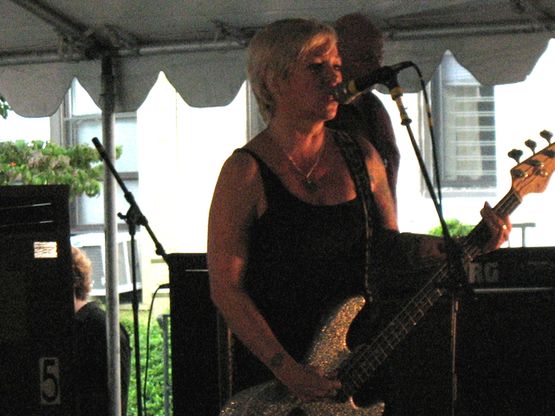 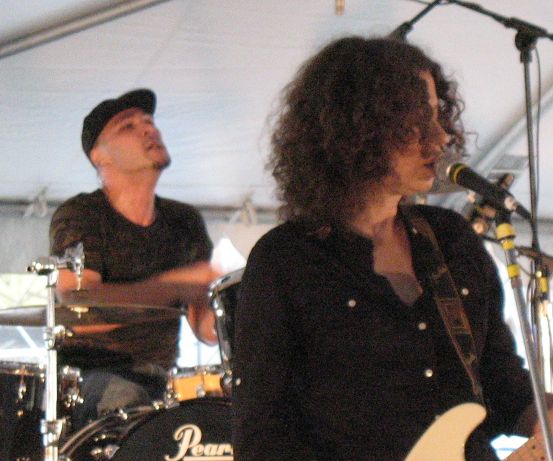 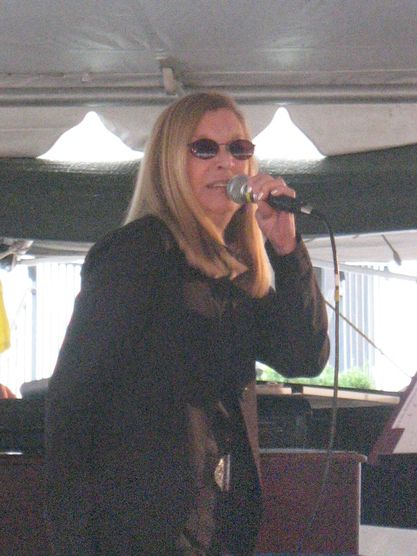 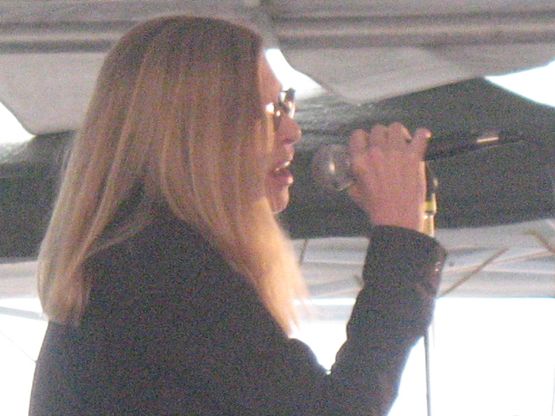 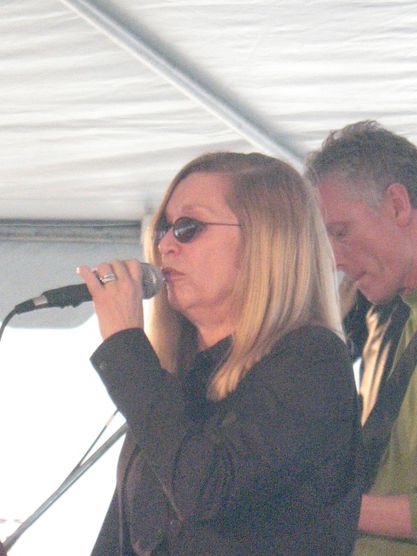 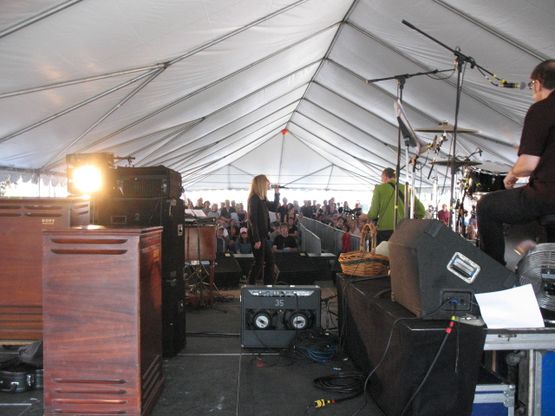 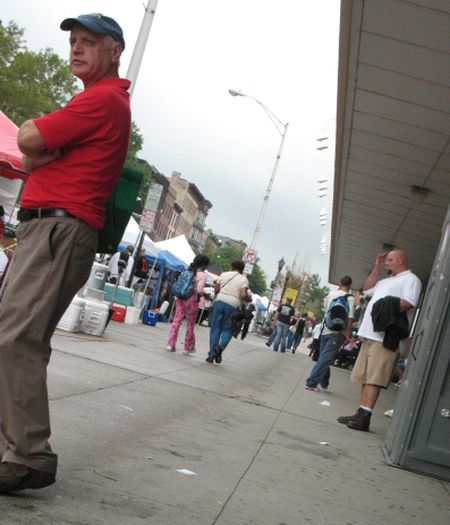 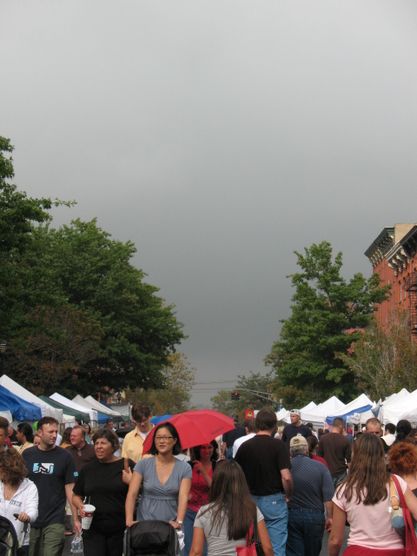 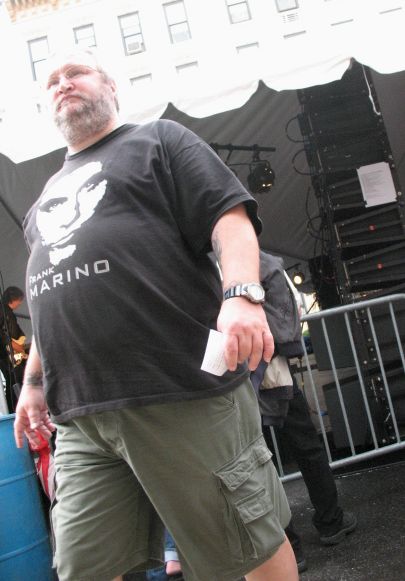 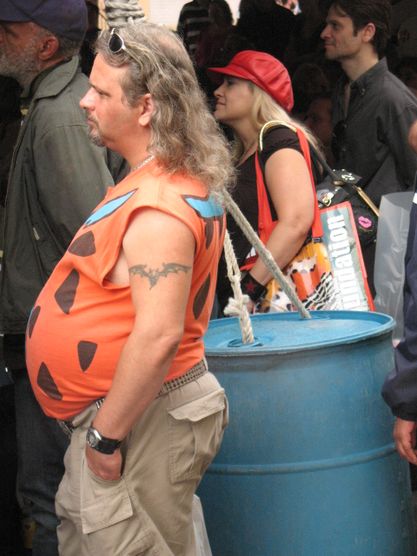 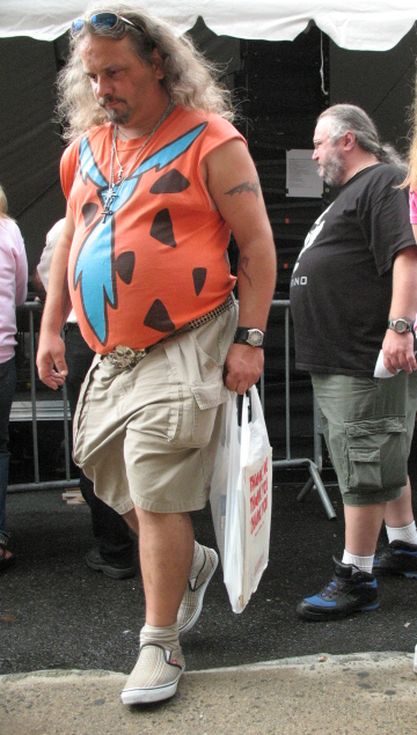 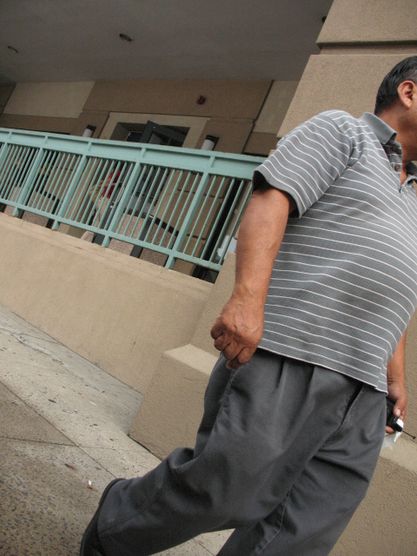 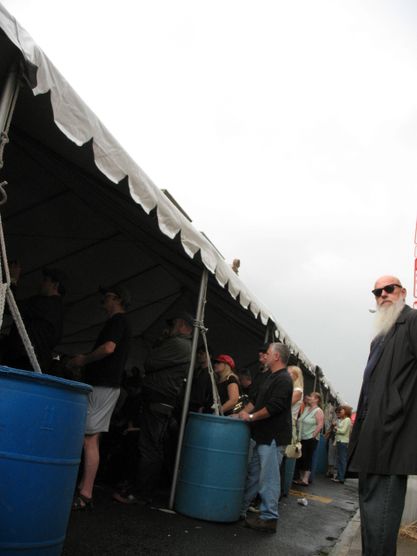 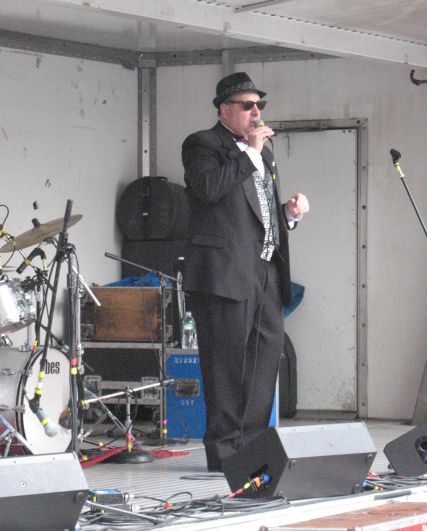 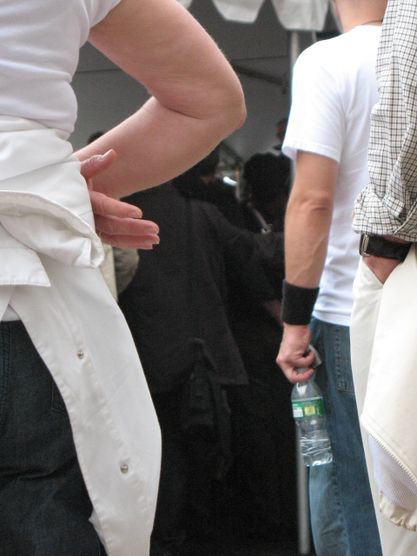 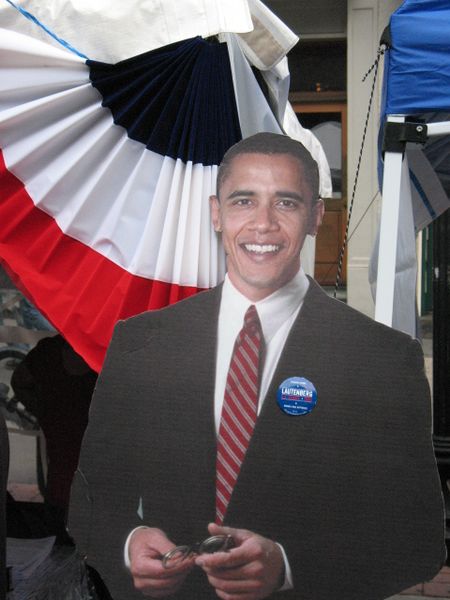 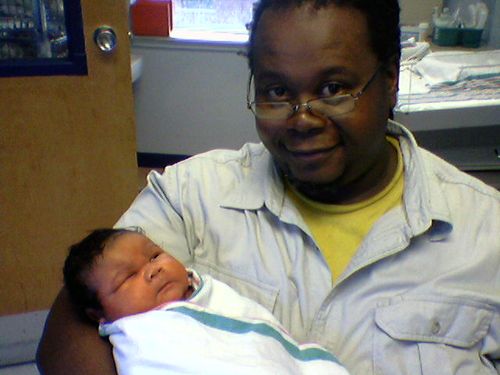 Man it is HOT outside. The weather forecasters were correct. It’s bloody hot. August hot. It’s not even summer. Lucky people are down the shore, though whats the point if the water is too cold and it probably is. Right now it’s 93 according to the New York Times, or rather the guy that’s climbing up outside the Times building today. Tomorrow they’re saying 100 degrees.

Last night was nothing special. No reunited bands from the seventies doing a free show at the South Street Seaport. Came home, took a nap which meant I missed Meghan and Jim’s daughter play a Battle of the Bands, Lily’s band was called Bye Bye Box. I half heartedly committed to it when I saw Jim Mastro the other day. And once I woke up I was somewhat groggy and passed on seeing Sexpod at McSwells. Alice and Karen from Gutbank’s other band.

I watched a recording of Stephen Sondheim’s Company instead. I do love Sondheim and next weekend on Father’s Day I’m seeing Sunday in the Park with George with my brother Frank, his wife Elaine and their daughters Meghan and Corinne. Meg’s husband Rob, isn’t coming for some reason. Or maybe he will and I’ll have to forfeit my ticket. I’d be willing for a price.

Frank and I were planning on seeing Company on Broadway last year, but then I had my meltdown, Frank had a stroke and Company didn’t win any Tony awards so the show closed a week later. It’s available on DVD, but as much as I enjoyed it, there’s a really good documentary on the recording of the original cast album from the early seventies that is also available on DVD from Netflix at least.

Went to bed after reading some more of David Sheff’s Beautiful Boy about his son’s methamphetamine addiction. Sad and harrowing, doesn’t make for a beach read which is just as well since I’m not at the beach. David Sheff is the guy who interviewed John and Yoko for Playboy magazine back in 1980, which is what I was reading on December 8, 1980 when I heard of John Lennon’s murder.

Still a mind fuck 28 years later. Much like the way people remember where they were when they heard John F. Kennedy (or Robert Kennedy 40 years ago), I remember the night of Lennon’s assassination all these years later. But I wrote about that before.

Definitely a scary book David Sheff has written. I don’t know how I would have handled having a son addicted to crystal meth. It is the scourge of the gay community still, and responsible for the rise in HIV infections in the 20-30 year old range of young gay men. Reading the book I find myself gripped by the thought of beating the shit out of the kid, which is how I would have been dealt with if I was a meth addicted kid to my parents.

That’s the first instinct, which is probably why it’s a good thing I’m not a parent apparently. And also a good thing that I don’t go to gay clubs and discos. The reason for that is I can’t stand the bump bump bump of club music. I had to go to the office today to sell 2 air conditioning units. I didn’t hear anything last night and figured that nothing was going to be done, but this morning I got a call from Hayne, the woman I spoke to about it today.

The original plan was to meet up at the office at 10:00AM. She phoned at 9:15. We arranged for 11:00 instead which was fine by me. I got on the bus which was soon crowded, some old geezer sat next to me. I thought I made it so my iPod earphones were wound up and not in anyone’s way, or my way. Got up to get off at the bus terminal, the geezer was sitting on the cord, effectively destroying my earphones.

Oh how I wanted to garrote him with the cord as he walked down the stairs in front of me.

I had Radio Shack headphones as back up and where they used to suit me just fine, now they’re cumbersome and heavy and annoying. Spoke with Julio about where he bought the original set, he tells me he bought them online. I would have bought them wherever they would have been on sale, but they’re nearly impossible to get them retail wise. Heard from some guy named Robert who told me he worked for Hayne and was on his way to get the AC units.

An hour later he still hadn’t arrived. I did a reverse lookup for his number and it was listed as the drag queen restaurant Lucky Chengs. 30 minutes later there’s an unshaven drag queen outside my office. I gave him a quick ‘how to’ on the units and he seemed to grasp the concept, then I helped get the units down to a taxi. I couldn’t help but feel I scammed Hayne and the drag queen but I hadn’t.

In any event, they have my cell number and my email address and it’s been a few hours so I guess everything is working just fine. Did some laundry somehow with low water pressure and got a haircut. That’s been my day thus far.

Rand has been fairly active, posting super 8 films years ago that were made by Martha Keavney. Here’s another one, ‘The Making of The Love of Two Women’. A lot of people really liked this one when we had shown it at McSwells all those years ago. I hope you do too.

Let me know what you think will ya?