Today is Friday, May 8, 2008. It’s official. There’s no two ways about it. Maybe somewhere else it’s Saturday, but right now it’s Friday. I didn’t go to work today. I took a day off.

Last night was mellow. Roger Johansen texted me, telling me he had an extra ticket to see Mike Watt at McSwells. But I was basically in for the night. Too lazy to go out even though it would probably be a good show and also good to see Roger.

No not for me, at least last night.

I was content to just stay in and relax. Bill came home a little before 10:00 and we had a lot of laughs. We then watched Southland which we’re both enjoying. I’m liking it more than I expected to. Still, a shiny object could easily divert my attention.

I stayed up and watched the Simpsons again. Woke up as Bill was getting ready to go to work. I just had to go to the bathroom and when I went back to bed, Bill was at the ready, all set to tuck me in before he left the apartment.

I slept for another hour then got up and showered and made some coffee. Did some laundry and read the news online. Yes I am contributing to the death of the newspaper. I still buy them on weekends so that has to be some form of contrition.

I also ran some errands to the dry cleaners, the coffee shop for more coffee. Jeff wasn’t there. I was hoping to ask him if he moved into his new apartment, which is across from my kitchen window, on Willow Street.

I was actually hoping for a review of my Prancing Pantomime Pony routine that most anyone looking in my kitchen window could catch several times a day.

Tonight I’m going to see Wolverine with Bill and an old friend of his, Fred. We’re supposed to meet at a Mexican restaurant in Chelsea at 7:15 then catch the 9:30 show nearby. I enjoyed the X-Men movies, but the last one was a bit lame.

I also used to read the comic book faithfully, specifically after the rebirth, which introduced Wolverine. So I do have an interest in this one.

Tonight is all Bill’s planning and he’s good at that sort of thing. All I have to do is show up. That means I should leave here in around 45 minutes. Haven’t had Mexican food in a while, and I do like Mexican food.

More Cal-Mex than Tex-Mex though.

I’m happy to be out of the apartment, even though I did walk around Hoboken a couple of times today. Lot’s of people were out, it was a good day to take off. And hopefully the weather will continue to be pleasant.

It would make for a nice night in Manhattan, specifically Chelsea.

Here’s a pic from my travels around Hoboken this afternoon. 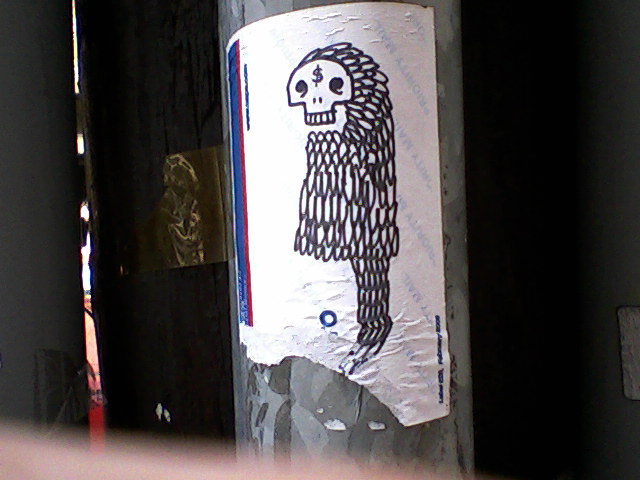