Getting an early start today since I have something scheduled for later tonight which I will write about later. Something out of the ordinary which you may or may not get a kick out of. I don’t even know how it will turn out but it’s something that has been suggested to me once or twice before.

It’s a free thing whereas other times it was something you had to pay for. It could all turn out to be a plea to give money to this thing, or it can actually be useful. Or at least, interesting.

And tonight is part one actually. I suppose I’m leaving you anxiously waiting for whatever is going to happen. It does involve heading into Manhattan and at night too. So I’m leaving a little after 5PM and taking the Path train in and that’s all I’m going to say about it.

What else is there?

Well I did have some more strange dreams, cannabis free of course. New Jersey legislature approved the use of marijuana for medicinal reasons but that’s besides the point and that happened in real life not in my dreams.

One dream involved being down the shore, around Sandy Hook it seemed where I came across a horseshoe crab that was shaped like a box. Quite strange.

The other dream was involved with a church which may have been Saint Philip’s Church in Saddle Brook. It may have also included some kids I hung out with, Billy and Kenny Hayes,. One of them was diagnosed as psychotic and the other was a fireman, which is what their father was.

In the dream I was attending a service and holding the sacraments which when I looked closely at it, contained fruit flies. I tried to dissuade people from taking the sacraments but all they did was chuckle as they were passed around. It was pretty gross.

I’ve already eaten dinner, and now it’s 4:30. Seems I’ve been eating earlier and earlier. Is it my slide into senior citizen status? No more than likely it’s because the food is ready then. Plus since I’m going out and won’t be back until later (my cut off eating time is 7:00) now seemed to be the best time.

Some pasta and chicken. Fortifying and good for going out into the cold cold night. I’m also wearing my father’s silk long johns, for the first time in 10 years. I got them when we cleaned out the house in the last century but never had the nerve, or guts to wear them.

Very comfortable and they do keep my legs quite warm, though the true test will be when I am out on the street in the city.

And from what I read on the New York Times, Conan O’Brien is leaving NBC since they’re moving the unfunny Jay Leno back into late night scheduling. Conan seemed a bit pissed, after all he and his staff picked up and moved to Los Angeles from New York.

It’s a shame NBC didn’t give him a chance but he will have his millions to keep him warm and dry his eyes with. And here I go heading out into the night, or rather, twilight.

Hopefully you both have good nights and I will tell you all about tonight’s excursion tomorrow.

It’s back to work for most, and another day with less people around for those of us between jobs, or to put it less delicately- unemployed. It’s now raining out quite hard making me glad that whatever I had to do today, I got it done before the downpour.

I did laundry, ran around midtown looking for a photograph of Fred Astaire and Ginger Rogers dancing in ‘Top Hat’. It’s for one of the occupants of the offices at the old job. Owner of the company is a multi millionaire and I was asked by his assistant to find the photograph and get it blown up for his mansion in Palm Beach. 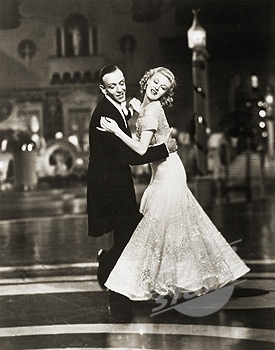 I didn’t mind, but Jerry Ohlingers’ once of west 3rd Street by Bleecker Bob’s, then on 14th Street is now on 35th Street. At this rate they will be across the street from the Apollo in a number of years. But I couldn’t find that exact picture and they suggested Movie Star News on 18th Street which was closed today, presumably for Yom Kippur.

So I will have to try tomorrow. Weather permitting.

I spoke with my sister in law Elaine today. She was off of work due to the Jewish holiday. It was an unexpected and fun chat. She was thinking about seeing Leon Russell yesterday but she was a fan of his back in the day. I emailed her some pics of ol’ Father Christmas and since she didn’t see them, not being at work, I told her about them which really isn’t the same thing as seeing them.

And since a picture is worth a thousand words, and I sent her 4 pictures…well, do the math.

One of the things that came up was my brother Frank. I don’t know if I mentioned it in an earlier post, but one thing I told him in my Beatle remastered euphoria was the fact that there was a slight jealousy regarding the Fabs.

It was also an attempt to boost his ego.

I told him that I was envious that he was aware of the Beatles releasing new records back then, and when I started listening to them, they were history and nothing new was going to come from them as a group, only as individuals which as you may well know, is not quite the same.

It was just something that came into my mind as I was riding the bus into the city. Just odd little transient thoughts that take up temporary quarters in my mind. So things seem to be back to normal, which is so loosely defined in my world.

Not like ‘Next to Normal’ the Broadway musical about a woman who’s having a nervous breakdown. People apparently leave the theater very depressed and not singing a happy tune. Not the show for me to see though it did win a couple of Tony awards I think.

I myself happy that I haven’t won any Tony’s. I don’t have a mantle to put them and wouldn’t know if I should get the mantle first or win the award first. Overall, I am content, not contentious. That was Saturday
and not today.