Friday in Hoboken. The streets are clearing out, plenty of parking once again. And hardly any money to be made busking. I should have known but still I enjoyed myself and came home with fifty cents more than I did when I left earlier. A meager profit for this meager prophet. Still it was somewhat productive. I try to learn a new song every now and then and last night I taught myself Blondie, Heart of Glass. Of course not a synthesizer in sight and none of Clem Burke’s excellent drumming. Just me on my trusty Fender F-210 acoustic guitar.

There was hardly anyone around on the riverside promenade. My trusty toddlers with their guardians made their way past me and of course they jumped up and down and clapped their hands as I played the Modern Lovers, Roadrunner. Tariq was nowhere around though his woman Francine walked by and I chatted with her for a few minutes. She left and a little while later I started to get my stuff together as Tariq walked up. I was playing for two hours and sweating quite a bit. Tariq hit me up for a smoke and once he got his another friend of his showed up and asked me for a smoke, offering me a swig from his bottle.

I declined and made my way home after showing Tariq the chords to Heart of Glass which I am certain he has forgotten by now, instead focusing on whatever everyone else plays when busking. That’s a reason why I don’t play with other buskers generally. I will not lay Sweet Child of Mine by the ultra-horrible Guns and Roses. Oddly enough, other buskers don’t play the Beatles at least not while I am around. I guess I don’t play well with others.

Last night I attended a meeting of Hoboken Fair Housing Association. The local developers are trying to get rid of rent control here in Hoboken like they’ve done in a few other towns. Hoboken being the jewel in the crown for New Jersey is now in the crosshairs. Last year a provision was on the ballot in November with a slippery wording included at the last minute, changing that if you were for rent control you should vote NO. So a lot of people voted YES and hobbled the rent control laws inadvertently. I would have been involved anyway, and a friend of my brother Frank is involved and has gotten me involved as well.

There were a few people from the past at the meeting, some people I had seen around town for years, others I knew like Fred and Lois. They made an appearance before going out for an anniversary dinner. Things are planned, things need to be done. I was reminded by one of the speakers that there are more tenants in Hoboken than there are landlords. If people can be reminded of this as well there might be a chance that rent control could be stabilized.

Unfortunately I also learned that no one on the city council is a renter, they’re all property owners so we can’t really expect much help besides empty words from our local government. Half the council seems sympathetic to the rent control cause and the other half sides with the developers. I remember Jim Mastro organized a protest in the 1980’s against overdevelopment of the waterfront.

I went with some Maxwells people including Julio, who out of the Maxwells people was the only one born and raised in Hoboken. The protest march started at 14th & Washington Streets and at every cross street we would stop as a bell tolled and we decried the death of the waterfront. As we got closer to midtown Hoboken we passed a stronghold for the then mayor, Steve Capiello. They recognized Julio and gave him shit for marching with us, these interlopers. How could Julio betray them in such a way?

You’d think with the internets it would be easier to get people involved, since in the 1980’s it was mainly through fliers and word of mouth. There were I guess maybe 30 people last night. Word is getting out, some people planning on guerilla tactics on putting up fliers to educate people. Others making plans for more civilized things. Less than three months to go. Baby steps last night, hopefully we will be walking fully in a week or two with more people! 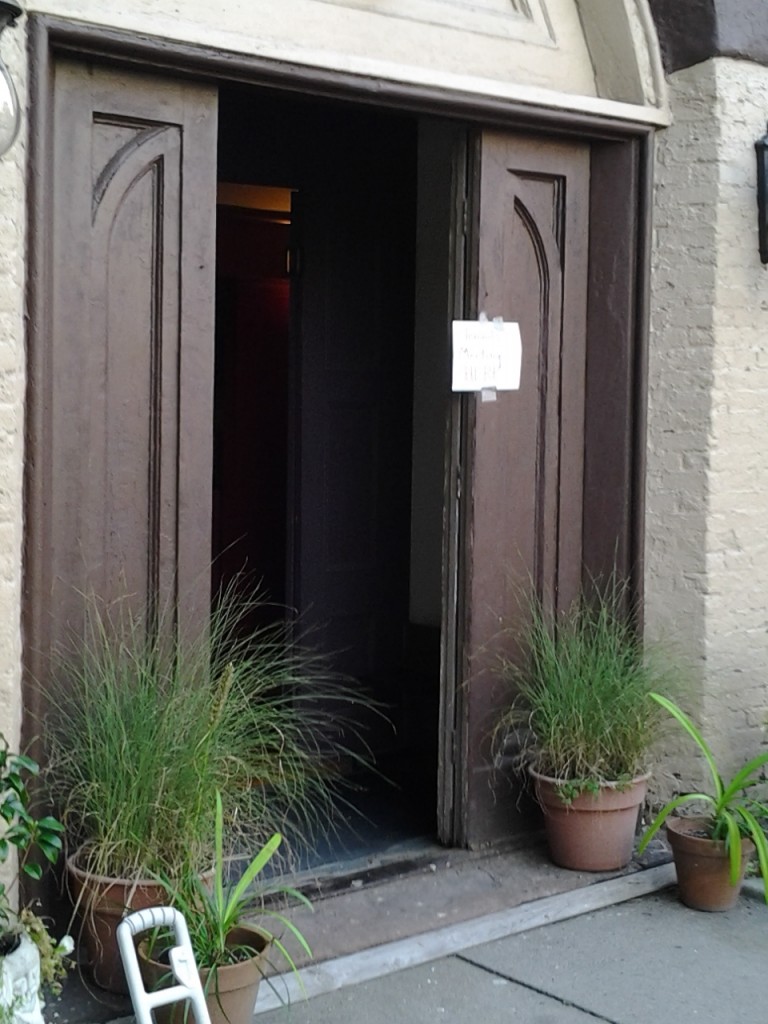 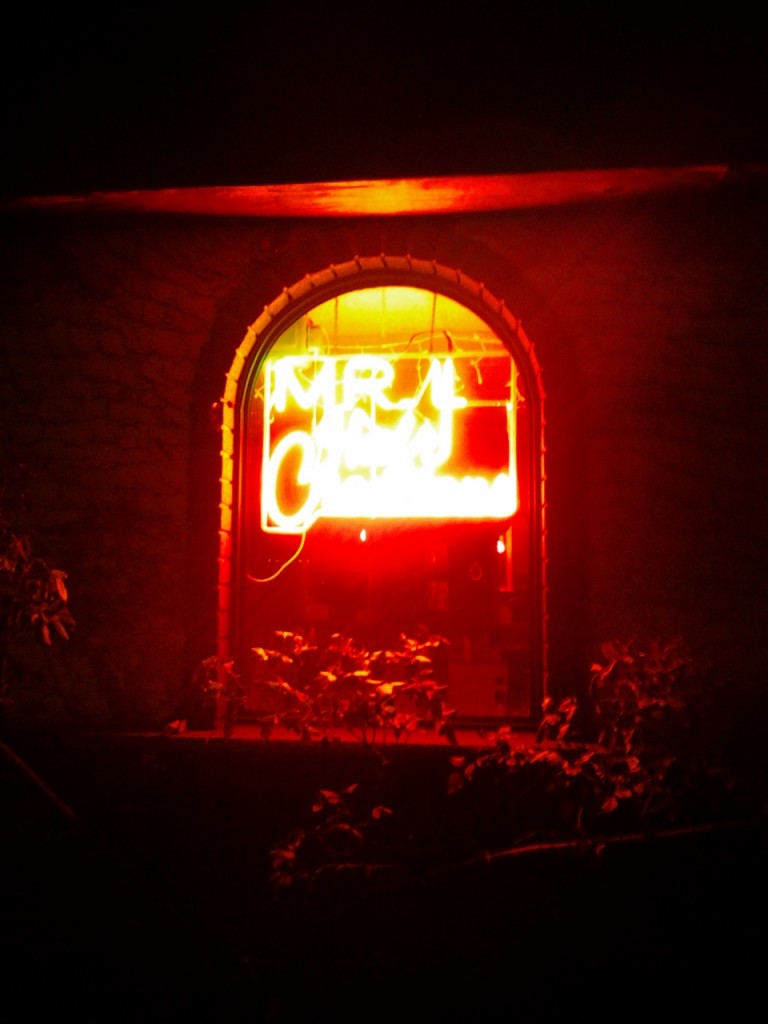 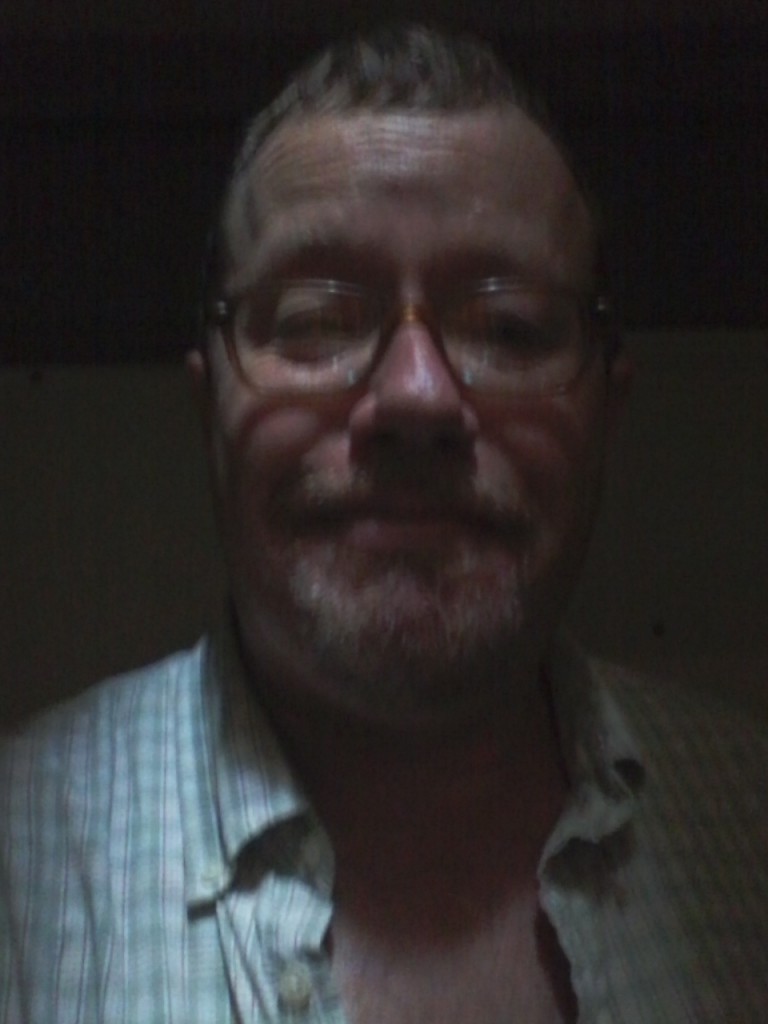 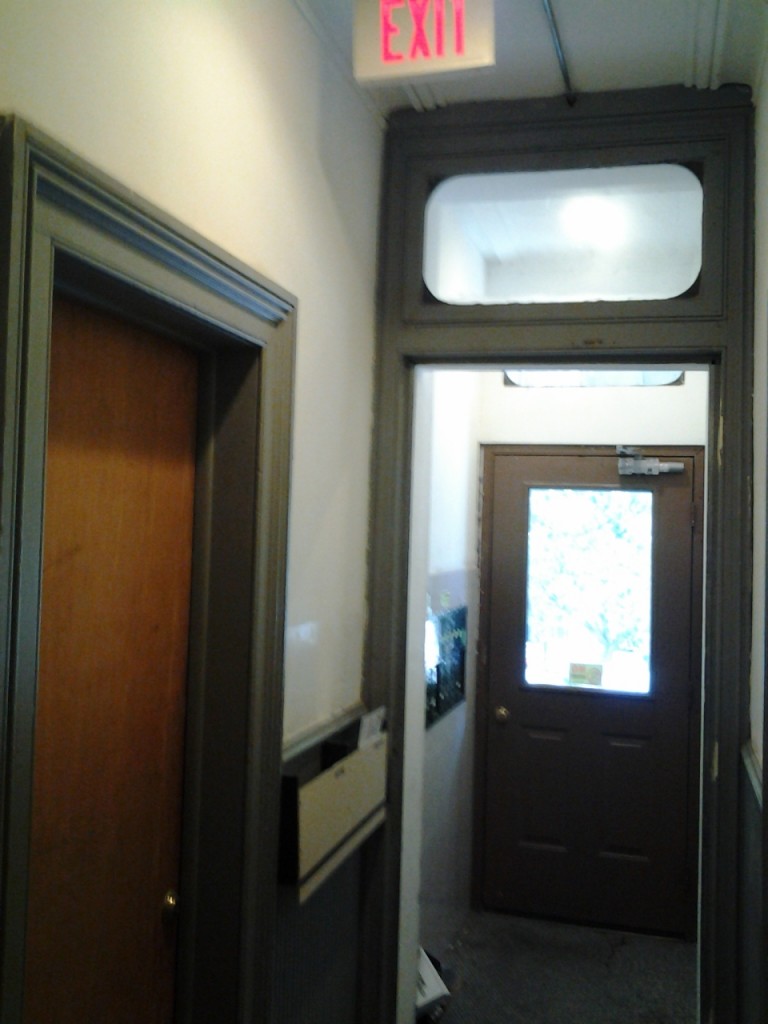 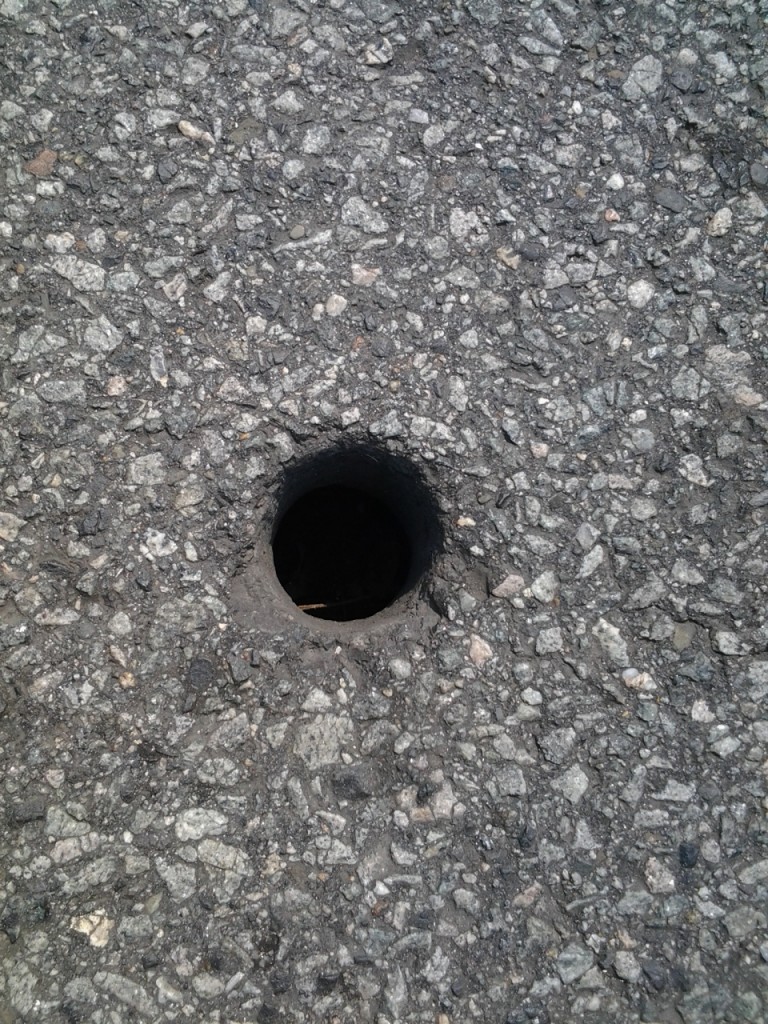 Back at work today. Woke up to a maelstrom outside my window. Definitely a day to sleep in and how I would have loved to have done that. But no, some misguided sense of duty called and I just had to answer that call.

I granted myself about 15 extra minutes of sleep which eventually amounted to about 10 minutes. What I bargained with for those extra minutes I have no idea but something would come up eventually no doubt.

Last night I should have gone to see Lois DiLivio performing in a shop window on Washington Street, one of the few shops I did not apply to. I thought about going, and thought about not going but once I was settled in at home, it was extremely doubtful that I would head out again. My loss, truly.

Just one picture from Lisa Rigoux Hoppe’s camera made me realize that I should have at least made an appearance. Regardless, home is where I stayed, waiting for Bill to come home from the Nuyorican Poet’s Cafe, a celebration for Miguel Algarin.

By the time he came home I fell into the comfortable rabbit hole of The Lord of the Rings: The Fellowship of the Ring. Yes, I own the super deluxe version but this was so comfortable and familiar that I opted to watch it.

Bill walked in, tired and happy to be home. He did some computer stuff on his iPad or Mac Book or possibly both before he went to bed. I stayed up and watched the Simpsons before I went to bed. I should have taken a melatonin like I did the other day and like I did a few months ago.

Things were going well for a while but lately I’ve been stressed and my sleeping has been a bit fitful, so a melatonin tablet is on the menu.

Got a text from my brother Brian this morning as I was getting ready to go to work. He was 2 blocks away. I would have loved to have met up with him, but no, it wasn’t in the cards. He did warn me about the maelstrom and told me to be careful and I told him the same.

I walked up to Washington Street, to the bus stop and called Bill as I waited. He was his usual effervescent self and I was the usual grouchy baby on the other end. After getting off the phone with Bill I decided to call my brother Frank to see how he was.

It ended badly once again with Frank last week and figured I might catch him at a moment when songs from Sweeney Todd weren’t being sung. The songs weren’t being sung, but he had no time as he was heading out the door for an appointment.

He did mention that he was worried about me and I told him I knew that. I didn’t say it was from Annemarie telling me.

Soon I was at the cigar shop working alongside the Bradley. Let’s face it, there is no love lost between us. It was sort of fun working at the cigar shop when Raymond and Don were working there, but they’re no longer around and the only fun comes from Sean who works part time.

It was a long day and there was the Big Smoke event going on a few blocks away this evening. The Big Smoke to-do is a show where cigar makers as well as scotch makers hand out free cigars and samplings of scotch all for the admission of $250.00 in advance, $265.00 at the door. Some cigar makers did stop by the cigar shop and blessed the staff with free cigars which was quite nice.

Marcus hung around the cigar shop most of the afternoon making things a bit uptight. He eventually left, leaving Sean and the Bradley and myself to man the shop. And it’s been not as busy as it’s been the past few weeks.

As I got my ducks lined up to close the store and make that 10:30 bus the cigar shop door opened and I thought to myself, ‘Wow, that guy looks just like Marcus.’ It was Marcus. He was coming back from the Big Smoke event with yet another cigar maker who blessed Sean and myself with cigars once again.

And now here I am, at home in Hoboken on the mainland. 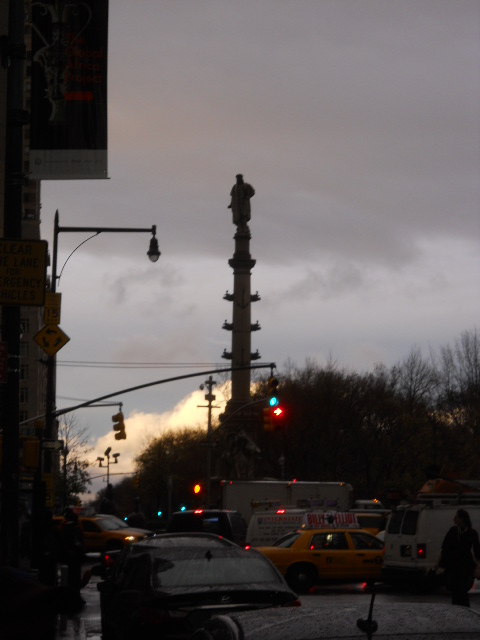 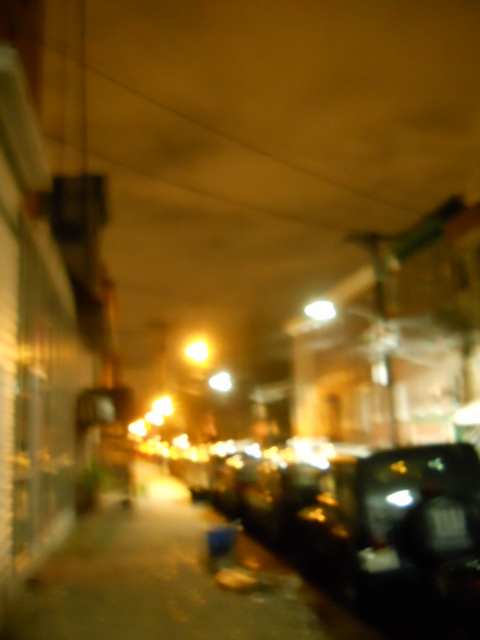