It’s a bit cooler out today. Not necessarily attitude wise but temperature wise. As in degrees, meaning °. Gray skies, supposed to rain the next couple of days.

I took Tales of the City on DVD from the bibliothèque. In a strange way, I was hoping to use this blog the way Armistead Maupin used his San Francisco newspaper column to create the characters of Barbary Lane.

I loved the mini series when it was on PBS. I was living on Jane Street in Weehawken when it was originally broadcast. Such happy times on occasion there and I sometimes thought that there was the potential for the Jane Street residents to live a life akin to Tales from the City.

We were interesting enough and creative enough. The landlady’s daughter working for Penthouse magazine, her undiagnosed Autistic brother being a mail room drone downtown somewhere. There was me and William, he being super creative, me working in the music studios and People magazine.

Could have been something. But I moved out (after 11 years) and within a year later William, his brother Chaz and Chaz wife Kathe, all tossed out when the landlords, Ms Penthouse and Mr Autistic decided to sell without even offering it to William or Chaz who would have bought it.

I could still write about that place, and with the passage of time I could make it a semi fictional account which would have been my original modus operandi.

I did wander around Hoboken for a while and ran in Tariq who did not win the lottery. Living his life the way he sees fit, the temperatures were in the 60-70° range, today being around 50° he decides to come out.

I showed him 2 new songs, Instant Karma and Don’t Play that Song and he was impressed. But it was cold and he wound up walking me towards the library before he headed off to his girlfriend’s studio.

Tonight I plan on going to Maxwells (yes Maxwells. I am being nice) to see Chris Repella’s band Glass Trees. They played last month in Jersey City, but Maxwells is so much closer.

And they’re going on between 9:30 and 10:00 so that means I will be home at a decent hour. Plus I’ve never seen Chris play, even though she’s been in a few East Village/Pyramid Club bands. So it should be nice to get out and about.

Tomorrow is Record Store Day so go out and pay your local record store a visit. I went to Tunes this week where I bought the Pretenders The Isle of View CD for $1.99. Sort of The Pretenders Unplugged.

And tomorrow I am planning on going to Thompson Street to see the Budos Band play a set at a local record store,.Generation Records which I think is between West 3rd and Bleecker St at 2:00PM. Of course it will depend on the weather.

For now, for me, it’s all about the laundry.

Bill is driving to Atlantic City this weekend, so he’s happy and I’m happy. So it’s all good.

Last night nothing special once again, though seeing Julio and Stine and Alexander was special indeed. After that it was all pretty boring. I edited the titles of tracks on some cd’s that Annemarie sent me last year. That was a painstaking labor of love, trying to figure out what was what since they all couldn’t be by Benny Goodman.

I watched Carole King who is a nice Jewish lady from Brooklyn. Oy. She’s a love that one. Then it was The Who live in London 1977. The concert where they got two clips for the movie, The Kids Are Alright- Baba O’Reilly and Won’t Get Fooled Again.

The rest of the show was ok. When they started doing Eddie Cochran’s Summertime Blues (which for some reason people think the Who’s version is great, I think it’s leaden and plodding) I threw in a DVD of The Specials called Too Much Too Young. A nice collection of video clips and some live footage but over all the narration was dreadful. Flat boring and monotonous.

It was like the filmmaker/Narrator Brian Zabawski was reading something off wikipedia and didn’t read the words. Properly. Gets an E for Effort though, especially since I never went about making a Specials DVD of my own.

After that some SNL repeat with Tina Fey then off to bed for me. Bill was at his mother’s so I had the big ass bed all for my big ass. Slept really well, woke up went out, got papers and bagels. After breakfast I sat by the computer and was reading the Daily News, the Voice of the People section, also known as the Letters to the Editor.

I usually enjoy it and as I read I noticed a letter from Hoboken, with a name that was awfully familiar. What are the odds, I thought, of someone having the exact same name as me? Then I realized that I had sent a letter to the editor courtesy of MoveOn.org the other day and today they published it. Ha!

Today was a beautiful day especially after the deluge of yesterday. I got some new bike shorts and gloves the other day and it was a nice enough day to take a spin around Hoboken. Rode up to 16th Street and looked around. Summer vacation is over for most if not all residents of Hoboken since there was no parking anywhere.

Rode down Sinatra Drive on the Hudson River and forgot all about the Italian feast. Today’s the last day. Procession through town, big heavy of the Madonna, fireworks and feast bombs. I missed all that. Apparently they stopped right in front of my building.

I rode past my old apartments in Hoboken. 1st Street and Park avenue, the mosquito infested illegal loft where I lasted about a month after donating a gallon of blood to the mosquitoes, leaving my loft mates high and dry but not in the lurch since I found 2 other people (Doug and Kate) to take my space. 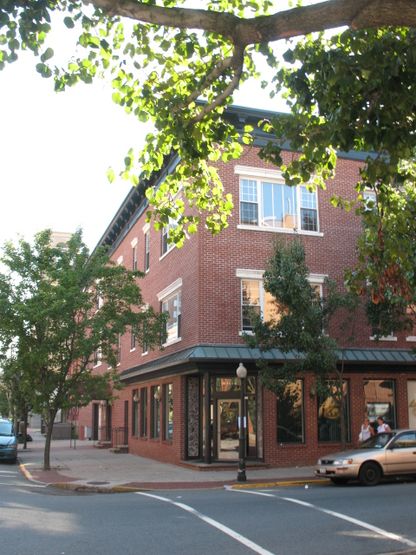 Then I rode by 201 Madison Street which was my first ‘real’ apartment. Lived with Jet for a while. I think I was there for about 2 years, moving out when the rent hit the outrageous rate of $500.00.
201 Madison 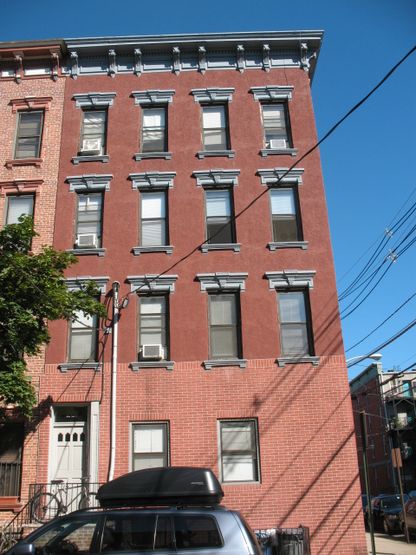 Back view- top 2 windows on right. My kitchen 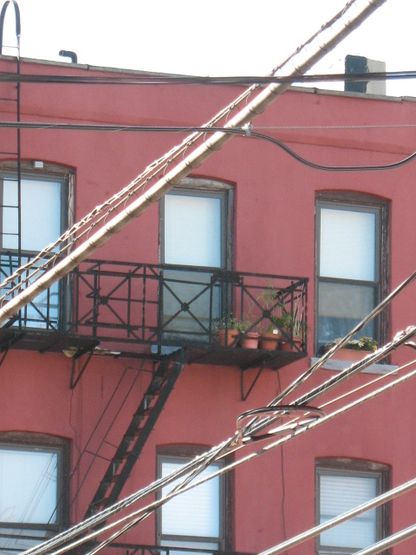 From there I went to 1124 Willow Ave. The basement apartment. Had a few wild parties there and it was also the party center after McSwells closed at night sometimes. I lived there with Jimmy Lee and then eventually Barbara Granite who turned out to be a little off in the head. I lived there from 1986-1989 or so. It was a hovel. Thought I would live there forever, though I think that with most every place I move to. 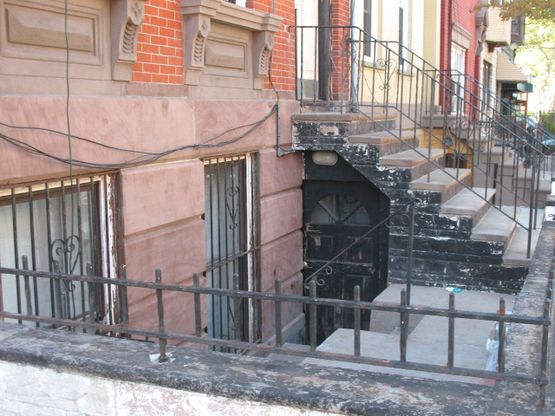 Never had a door with a lock on it then….nor bars on the windows

But Barbara Granite moved out and I couldn’t find a roommate so I moved in with Kevin Craughn on Madison Street, across from where I originally lived. I don’t remember too much, it was 1990. That was a hovel too, only on the top floor. Kevin and I barely got along but it ended on a good note relatively speaking.
216 Madison Street 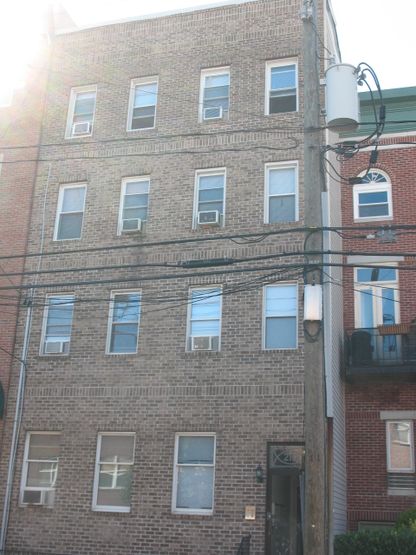 I moved out of there and into 710 Jefferson which was a nightmare. I had to be interviewed by the landlord in order to be a roommate. Barry’s roommate actually. He was on tour somewhere when I moved in and I had very little furniture, sleeping on a piece of foam.
710 Jefferson Street 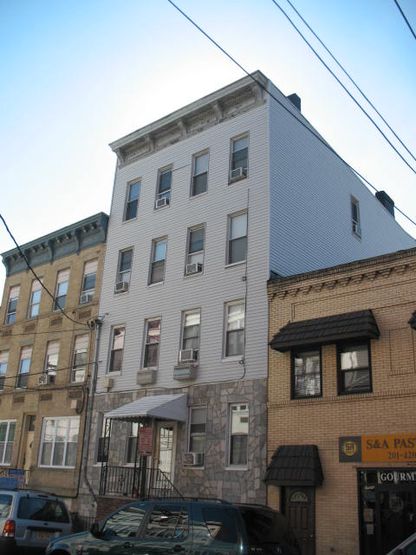 the building in the middle

All the while Zed had been with me through most of these apartments, except for the loft. He had the run of the place most times, except when I lived with Kevin. Kevin’s cats intimidated Zed so much that he rarely came out from under my dresser for most of the year. Then when I lived at Barry’s place, Zed peed on his futon which Barry brought up soon after my mother’s funeral. I apologized but I obviously had other more important things in my life at that time.

I didn’t like living in that building. The landlady and her family were on the first two floors of the building and always kept an eye open on who was coming in and out through the door being slightly open on their apartments. After that I moved back to Lodi to live with my father for a few months despite a lot of people warning me not to.
Jane Street, last house on the right

From there it was to Weehawken with William where we had a love/hate relationship for 11 years. Then back to Hoboken where I am at now. Zed didn’t make it to Hoboken, he passed away when I was living in Weehawken. I buried him in the backyard there, which has probably been torn up and paved over. 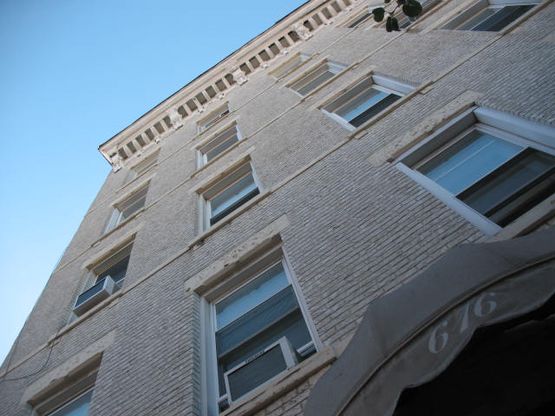 And I didn’t miss the procession of the Italians and the Madonna. They just passed by. 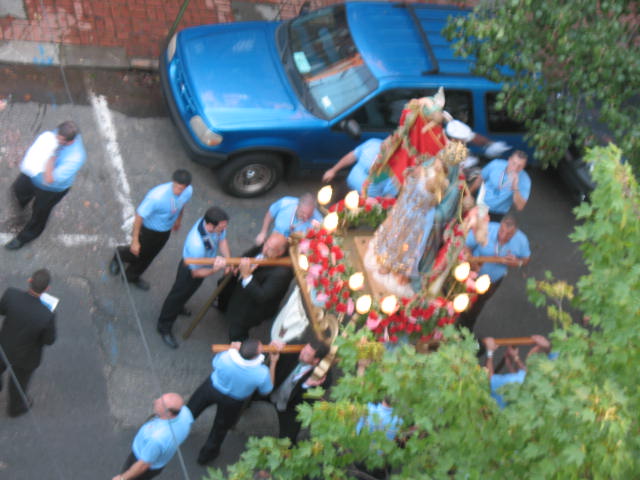 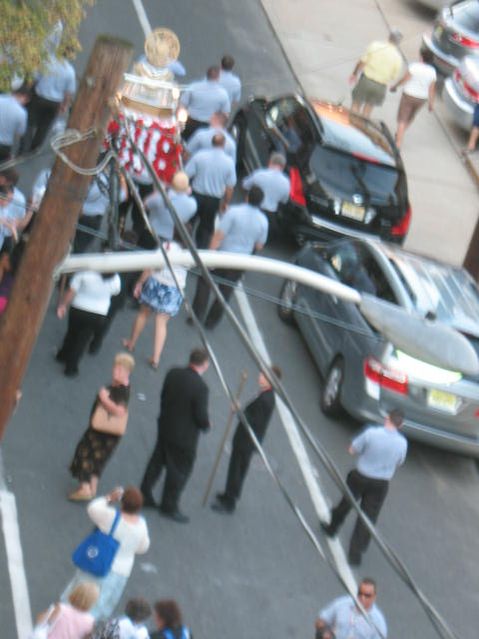