First things first. I was bored, and I washed the dress shirts I ironed and ironed them again. They came out ok. There were quite a few videos on YouTube regarding how to iron and I think I got the gist of it, but still I’d probably be wearing a suit jacket over these shirts. Also the novelty of ironing has passed and almost crossed over into drudgery. No scorched handkerchiefs here though.

Last night Bill came home. Not overnight like I had thought and hoped. No, he was here for a few hours. We exchanged gifts, I got him cuff links, he got me a coffee maker. I’ve been using the same Faberware 4 cup coffee pot for about 15 years.

William’s brother Chris gave it to William and myself in Weehawken and I got it in the custody settlement. Bill gave me a Cuisinart 10 cup coffee maker that programmable for it to go over on it’s own before I wake up, so waking up to the smell of fresh brewed coffee was quite nice this morning.

I had taken out of the Hoboken library 3 DVD’s, Sleeper, Love & Death and All About My Mother. Taking DVD’s from the library is dicey since there is really no quality control. We tried watching Sleeper and Love & Death but the player could not read the discs.

So we threw in All About My Mother and after the first 5 minutes, Bill mentioned that he wasn’t into it. I told him to hang in there, it’s not ‘ha ha’ funny like the Woody Allen movies, but still there are some laughs that come from left field. Then Bill thought he might have seen the movie already, throwing out various plot lines that didn’t have anything to do with Almodovar’s movie.

I convinced him to sit tight and watch. Sure enough he was enraptured by the movie and the twists and turns. For me I was watching it for maybe the 4th or 5th time and kept finding different aspects of the characters.

It even touched upon Alzheimer’s with Penelope Cruz character so far gone that he couldn’t even remember his daughter though his dog did. It’s definitely a melodrama, some tears, some laughs and gets better each time I see it.

I suppose it is possibly Almodovar’s best. His funniest is still Women on the Verge of a Nervous Breakdown though.

After Almodovar I turned on Spectacle with Elvis Costello with his guest Herbie Hancock. I watched it a week or so earlier and while I watched it I kept thinking how great it would be if Bill saw it, so he did and really liked it. Unfortunately, after that he had to go home so he could take his mother to church this morning.

I hated to see him go and as I hugged him I asked if he had the cuff links and he said he had. I told him to call me when he got home and he said he would as he trudged down the stairs. I watched Saturday Night Live which was funnier than the previous week.

The Jonas Brothers, what is it about them? I guess it’s good that they play their own instruments so maybe in some garage somewhere the Jonas Brothers are inspiring some kids to start a band and seeing where that goes. Alec Baldwin of course was hilarious mostly.

At 1:00 I called Bill and got voice mail. I of course immediately thought the worst, but what could I do except leave a message telling him to call me and if I don’t pick up, to leave a message to let me know he’s ok.

I didn’t get that call until about 10:00 this morning. He said he was so tired that he went right to sleep and his phone had died so he couldn’t call.

I also had to tell Bill that he left his cuff links here. So while it was nice to spend roughly 3.5 hours with Bill, it was certainly better than nothing.

I did get a funny phone call from Pedro today, as well as a couple of racy cellphone pictures that he sent that can’t be published since he’s in uniform. He was telling me he was hoping for a quiet night with Connie as well as watching a boxing match.

He did not know that Connie invited 2 girlfriends over for the night so he was locked away in the bedroom watching the match.

He found himself the object of desire by one of Connie’s friends who was quite hot and flirty but all he could do was do his best to stay focused on the television set even while the woman inquired about the other tattoos he might have on his body. He said she looked like Penelope Cruz.

I’ve been in that position before, someone so good looking, so hot…you can’t look at them since if you do you won’t be able to take your eyes off of them.

One time years ago I was DJ’ing a friends wedding at an art gallery in Jersey City. There was this extremely handsome man who I had seen around Hoboken a few times and he always got my attention. Enough attention that I could not take my eyes off of him. So good looking and well dressed.

Here he was at this wedding. As the day wore on, clouds started to gather and since I was DJ’ing outside it was best to call it quits. I was loading everything into a van, and here comes Mr. Handsome, willing to help me out.

‘No! No thanks, I got it, I can do it. Thanks..’ I just could not bear to be in such close proximity to his beauty. Never saw him after that.

It’s Saturday. And it’s freezing outside. Right now, according to the New York Times it’s 18 degrees. That’s 11 degrees more than it was when I woke up this morning. Still alive, carbon monoxide detectors are doing their job and not beeping. That’s a good thing I think.

Last night was a quiet night, just me and some Bushmills. Perfect for a winter night, some sipping. I watched Elvis Costello’s TV show on the Sundance Channel, Spectacle. Watched 2 episodes. The first featured the Police, Sting, Andy Summers and Stewart Copeland.

The first time I heard the Police was in 1978, riding to school in Scott Miskuff’s car. It was his brother’s 8 track actually and to my ears it sounded like Boston was doing reggae. I don’t know why I thought that, especially since they don’t sound like that at all.

Roxanne was the big hit and they were considered Punk so I eventually bought it. It was ok, their better record was the second album, Regatta de Blanc. I was more into Elvis Costello at the time so when he was putting down the Police, I paid even less attention to them.

Now they are all nice nice. It was ok. Andy Summers in now 79 years old, Stewart Copeland is a gangly goofy father of 7, and Sting has gotten handsomer and his voice carries a resonance it never had 30 years ago. The Watching the Detectives/Walking on the Moon medley was adequate.

After the Police I watched Elvis Costello with Rufus Wainwright. That was ok. Rufus to me, came off like a 30 something gay guy from Manhattan, which is exactly what he is. He did part of Memphis Skyline which is his song about the late Jeff Buckley and a complete version of My Phone’s on Vibrate for You which was great as it always is when Rufus hit’s that high note.

He really is a good singer songwriter. He’s playing the Wellmont Theater in Montclair in a month or so, just him and his piano. His half sister Lucy Wainwright Roche is opening so I guess there will be a duet or two. I’m not going. Not in the budget you see.

Like I said, when I woke up it was 7 degrees outside. Bitterly cold, I walked outside, past Mr. L’s. I was due for a haircut but I didn’t have enough cash on me. I went and got bagels instead and stopped by Alexander Lopez’s apartment and talked with his dad.

It had been about a month since I last saw Alexander so he had completely forgotten about me, making me this exotic thing in a leather coat in the middle of his kitchen. Julio was telling me that Alexander weighs 22 pounds now and wears the clothing of a 12 month old. He’s only 8 months old. It was good to see them. Stine was in the shower and I only saw her briefly, clad in a bathrobe.

After doing laundry I decided to head into the city and visit Farfetched. Lois and Harpy were working and it was busy. Not much left in the store, everything was up for sale, sometimes with an 80% discount. 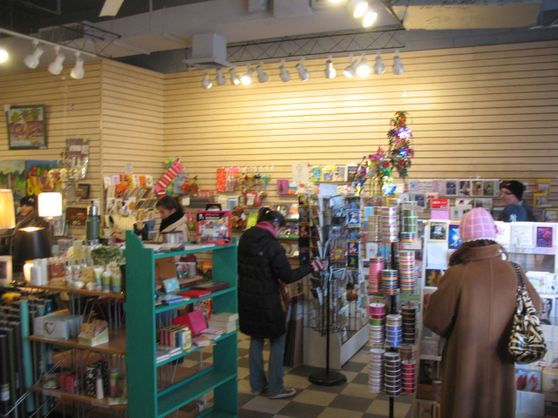 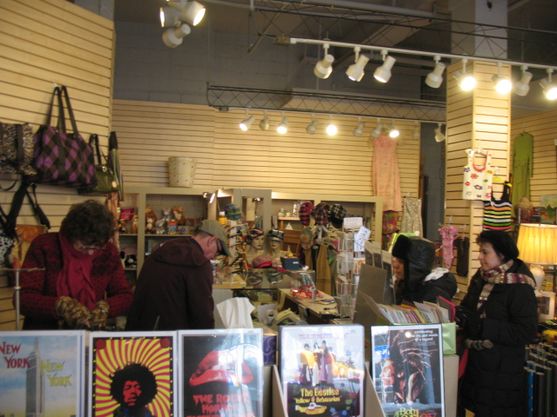 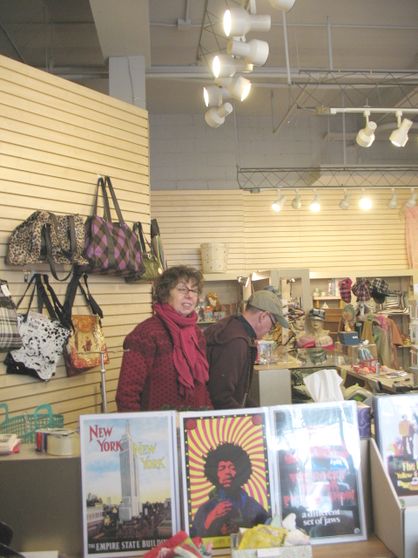 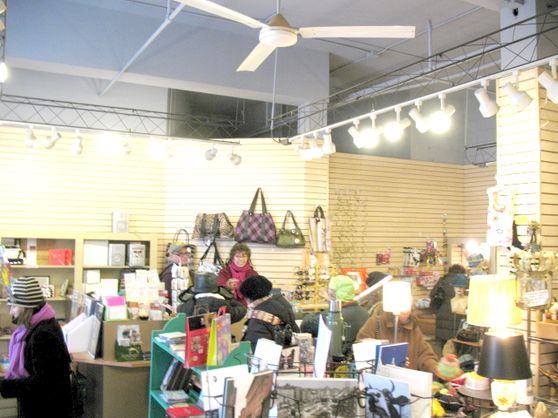 That didn’t stop people from trying to haggle. Things that were on sale for $50.00 were marked down to $10.00 and that was still too much money for some people. Some woman wearing a big ass fur coat was the Marvin Hagler when I was there. And she wasn’t marvelous.

For me it was a bittersweet visit. I got a bib for Alexander and some cards as well as a Wicked Witch of the West key chain that has Margaret Hamilton’s voice cackling, saying ‘How about some fire Scarecrow?’ among other things.

It was too cold to enjoy a Padron and walk up to 33rd street so I made a beeline to the 14th street Path station. I also bought Elton John’s Madman Across the Water for $5.00 in the soon to be shuttered Virgin mega store on Union Square, next to the rapidly closing Circuit City.

Also picked up Bon Iver, whom I saw on Letterman last month and posted their appearance on this blog. While walking around I was playing Bob Frank and John Murry, World Without End. That’s a album of murder ballads, each and every one quite gruesome, but it sounds amazing.

I bought that last night using the iTunes gift card my brother Brian and his family gave me over the holidays last month. I heard one song by Bob Frank and John Murry sometime last year and it was really good and when I picked up the latest issue of Uncut and saw they had another track on the free CD I decided to dive in and buy the album.

Like I said, it’s gruesome, hearing them sing, ‘He cut her throat and gutted her insides’. Basically they took murder stories from the past 100 years and put them to some down home country tinged music. Murder ballads aren’t new at all, a strain of folk music for the past century.

Worth checking out I think, both Bon Iver- For Emma, Forever ago and Bob Frank and John Murry- World Without End.

Also bought a new CO detector and got a haircut from Tony at Mr. L’s. He once again outdid himself, trimming gray hairs from my goatee, trimming my nose and ear hair as well as trimming my eyebrows. He earns his tip every time.

Bill is quite ill right now, laid up in Stuyvesant Town with a fever and sore throat. That sounds like what I had back in October. I hope to go see him tomorrow and on the way I’ll pick up some chicken soup from a Chinese kitchen on the way. A quart or two for Bill and his mother.

It’s supposed to be warmer tomorrow they say. Could make it into the 20 degree range. Almost beach weather.

Add my friend Billie in Washington DC to the unemployment rolls. He invited Bill and myself to stay with him if we wanted to go to the inauguration, but I said thanks but no thanks. It’s going to be too cold and very crowded. I can watch it on TV.