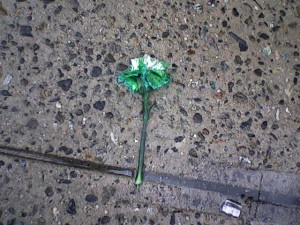 I woke up this morning with a lyric in my head. Not going to write it down here, I wrote it on some paper, but I think it’s a decent lyric. Just a couple of lines, but it’s a start. Roam wasn’t written in a day you know.

I am still digging the fact that Mr. Wonderful Jim Mastro really fixed up my guitar. Can’t stop playing. Today I taught myself, Surrender by Cheap Trick. That is a lot of fun to play, and I don’t even mind singing about Kiss. A lot easier than I expected.

Also 2 Grizzly Bear songs, Deep Blue Sea and Two Weeks. I am really digging it and been exercising my left index finger since it’s a bit stiff. I exercise it by bending it up and down which if I did it in public, it looks like I would be telling people to ‘come here’.

I should be grateful that it’s not my middle finger, but I’m really not.

I was so excited about the guitar that when Bill came home I showed him and played Half a World Away by R.E.M. and 2000 Miles by the Pretenders. This afternoon I also played Goodbye Yellow Brick Road by Reg Dwight.

Had a good talk with Juan last night. He’s not in a good way though. Not my place to write about it since it’s not my life, and I don’t want his resentment, but like I said, it ain’t good.

Not much TV today. I watched Cash Cab, a game show set in an actual taxi in Manhattan. It’s a fun show, the cab driver is pretty silly and goofy.

My friend Vinnie says I would be great at it, a natural, and having written that, I’m pretty sure I wrote about it. I’m going to have to suggest something other than coffee since I don’t drink coffee after 12:00PM. I have enough difficulty going to sleep and caffeine would certainly do a number on me at 1:30 in the morning.

I watched Heroes last night. It’s great when you DVR it, the whole show is about 40 minutes sans commercials. And once again it was lackluster. They should pull the plug on the show. Really, make this season the last season. It’s going nowhere and not even Milo Ventimiglia could save it.

Most of the day has been playing music and listening to music. Much like when I was growing up. Music music music. I hear a song, check the chords online and start strumming away.

I’ve been meaning to write about a Facebook experience I’ve had. No, not like that. I came across someone from high school’s name and checked out his friends. I knew some of them. One of them was this kid named Brett who lived in Rochelle Park, the town next to Lodi where I grew up.

Brett was so obviously gay, I don’t know if he knew but I knew I was and my early gaydar certainly pinged on him. Not my type, he was maybe 98 pounds soaking wet and being a boy named Brett, I guess it was destiny that he would be gay.

Definitely did a number on my head. Still not my type and despite his hirsute looks and macho exterior, I am sure that when he opens his mouth to speak, it’s ‘Hello Mary’.

Another Facebook thing that popped into my head was the fact that I was so excited to make $3.00 on Saturday while busking that I wrote about it as my status. Today I thought that some of my friends from grammar school that I am friends with were probably tsk tsking when they read it, that is if they don’t hide my postings, anti catholic/religion, anti republican, pro gay stuff.

Then I realized that I’ve done perfectly well without them in my life for the past 33 years and I really don’t give a damn what they think.

Now I’m off to see Lisa after I post this.

Today is World AIDS Day. Remember those who have fallen and celebrate their brief lives.