And here we are at Friday. So far it’s been a busy day. Running around here and there. Saw Bill off this morning. He was off to Elmira NY to play keyboards at some church function and also see a friend he hasn’t seen in years, Jennifer. I met the two women driving him, nice people.

I heard from Casey Chasm yesterday, Mrs. Chasm was due yesterday so today I asked how things went and they were inducing labor today. I’m sure all will be well with them.

Besides quite a few unemployed people wandering around. So I have the apartment to myself tonight. What to do? I did laundry today, returned Close Encounters to the library this morning. Read the papers.

Not much going on in Hoboken or so I thought. Just read about someone who was brandishing weapons on Garden Street, right around the block from where I am. On my travels I saw some sort of commotion. I

figured they were chopping down trees like they’ve been doing around Hoboken lately. But apparently a senior citizen with a gun and a grenade was running around. Inside the senior’s house there was a stockpile of guns and grenades.

The bomb squad has been called in from Jersey City to investigate 632 Garden Street. 20 guns have been found. It all started this morning and the investigation continues at this hour. Oh Hoboken, so much to answer for.

That’s about the high point of the day.

Bill just phoned from Jennifer’s car. They were out looking for a steakhouse where they can eat and catch up on the last 20 years. I

took the air conditioner out from the window yesterday. Didn’t use it that much this summer. Only had it in the window for about a month. Life on the 5th floor brings a nice breeze provided all the windows are open for circulation.

There was talk of a Karaoke night earlier this week but haven’t heard much about it since. I asked around and got some links which I distributed to Rand, Lois & Bill but haven’t heard from anyone about it. The date was next Saturday so maybe there is still time. Or maybe not.

Tonight is Blow Off at the Highline Ballroom again and I will definitely not be attending that again. Juan’s working and Bill’s out of town and I sure as hell ain’t going there solo. Turns out I don’t like club music so much.

And to tell you the truth I never really cared much for Husker Du. Sacrilege? Perhaps. The Minutemen were so much better and easier to talk to rather than grumpy old Bob Mould.

I did like Husker Du’s cover of the Byrds Eight Miles High and that was sung by Grant Hart, the drummer.

Bob Mould did have a really nice boyfriend. I forget his name and don’t know if they’re still together. He is friends with a few of my friends so if I ever cross paths with him again I guess I will have to play nice.

Well it’s the day after. Last night, after I wrote I took a nap, meaning I lay in bed for about an hour closing my eyes and telling myself that I was sleeping.

I was rested somewhat and some more nap time could have helped but I had enough of that. I busied myself in the apartment, Bill eventually came home with a Subway sandwich for his dinner. I convinced him to take the nap then eat the sandwich when he woke up.

He’s lucky. It seems that as soon as his head hit’s the pillow he is out cold but easily awoken. He slept for a couple of hours. Juan called stressed out from having dinner with his relatives. I told him to chill out, just get here and we’ll be fine.

Bill eventually woke up and I tried getting him pumped up about going out, playing Michael Jackson high energy hits. I was apprehensive earlier in the week but last night I was raring to go.

Took a while for Bill to fully wake up but he did and we were on our way around 11:00. Now that’s something I rarely do anymore, go out at 11:00. I used to do that all the time. We met Juan at the Path station and waited on the platform.

Juan had some absinthe as well as a special little tablet of which I indulged once again. Bill abstained of course. So Juan and I sampled some magic as well as some absinthe and we were feeling good by the time we reached the other side of the river.

It was a nice night, the three of us chatting and laughing on the way. We had gotten to the club with no problem a little after midnight. I expected a line but we sailed right in, following Juan’s lead and me clinging to Bill’s hand.

Up the stairs, handing in the tickets, Juan checking some clothing at the coat check. The Killers were playing, or rather Rich Morel was playing his remix of the Killers and once again we followed Juan directly to the middle of the dance floor.

Now on the way to the club, Bill offered his thinking about what he likes to do when he goes out dancing. Just hang out and wait till you hear a song that you like. There was no waiting for the song, we just followed Juan.

It was a good song, the name of which escapes me. For me, the tablet was kicking in hard on an empty stomach and all was well.

Of all the times I had gone out late at night, I had never actually gone out dancing. Concerts, spoken word performances, but never dancing.

I figured the tablet would help me out with the groove and it did for a while. We ran into wonderful Andy on the dance floor and I asked him where the bars were.

He pointed me in the right direction and somehow Bill and I made it through the crowd of bears. I got a bottle of water and Bill got an Absolut Cranberry.

We looked around and I was overwhelmed. A few minutes before I was on the dance floor grooving and then it was all too much. I was still feeling good but needed some air.

Bill followed me out after getting stamped and outside the air was fresh, and it wasn’t crowded. We crossed the street and I sat on some stairs. I could hear the music from where Bill and I were.

Bill asked if I was alright and I told him I was but I couldn’t go back inside. I was mighty peaceful and the thump thump thump of the music and the room full of guys was too much for my delicate self.

Bill asked what we should do about Juan. I texted him twice but in my condition I didn’t realize that he was in a very similar state and wouldn’t be answering text messages in the dance floor.

Bill offered to go in with a message so I told him that I was outside having a bad trip. It wasn’t a bad trip but Juan would at least have an understanding about what was going on. He came out with Bill, and I reassured him that I was ok but couldn’t deal with the crowd.

Juan was staying and that was cool, Bill and I left and headed back to the Path train. It was beautiful night and we had seats on the train riding up to 33rd street and back to Hoboken, me feeling great, air conditioned and chatting with Bill.

We walked along the riverfront and Pier A, coming home eventually. We settled in domestic bliss, enhanced on my end. I played Discreet Music by Brian Eno on repeat. It certainly worked well enough that I chilled out and was able to go to sleep around 2:30.

At around 3:30 Bill was in the room. Apparently all the fire detectors in the building were going off, not that I could hear them. It was figured out that a hot water heater broke on the second floor which set off the fire detectors.

The fire department were summoned and they checked it out. Everyone in the building was out on the street except for me. I started to head down but on the first flight down in the darkness the beeping from the detectors stopped so I felt there was no need for me to go any further.

I did stay awake for Bill to come back and went back to bed. Juan called a little while after that asking if he could come over. I said yes and set him up on the couch. Bill was leaving at 8:00 in the morning so after he left I moved Juan into the bed.

Eventually I woke up around noon, still feeling good and did some laundry. Juan got up and went home to shower, coming back a little while later where we headed into the city to Bear Hill overlooking the Skate Circle.

A beautiful day to spend in Central Park, perfect weather to recover from the events of the night before. Now we’re all here again, Juan taking a nap in our bed and Bill on the couch watching Michael Jackson videos.

That’s about it. A fun night, different from the original plan. So nightclubbing isn’t it for me, I’d rather go to a show, a concert or just chill out somewhere. Had to find out somehow I guess. 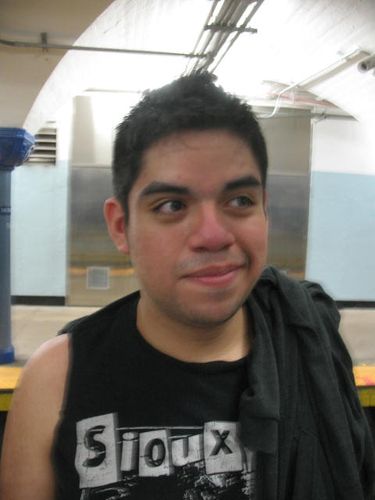 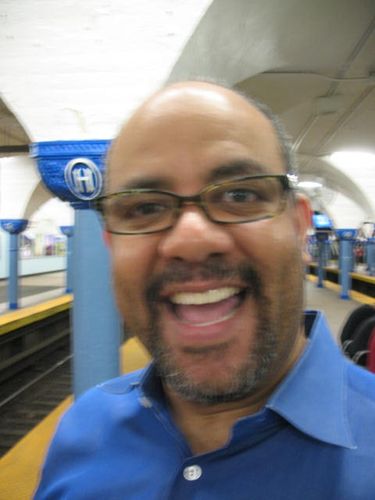 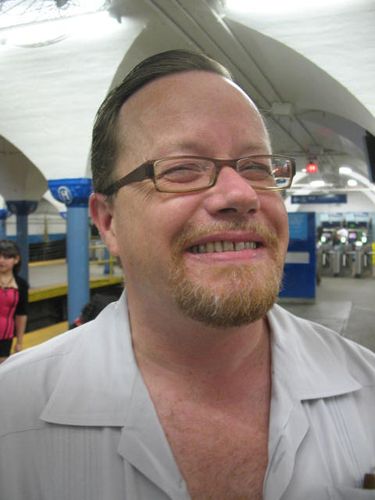