Well today has been a fartin’ around day. I know some of you would love a day like this, but you should be careful of what you wish for.

So since I didn’t do much of anything today, (hello laundry) I’ll spare you the iPod shuffle thing and look back at the previous entries for the third of September.

And here we go.

Disney’s Dream Debased, 2006.
I sit around for Bill to deliver a California King sized bed. It wasn’t a beach day since I had to sit and wait for Bill and the bed. I watch a DVD that I got for Bill’s birthday, a Herbie Hancock DVD. Brian Eno is in it so that’s what got my eye.

I was working at McMann and Tate, and very unhappy. The night before Juan came over and we riffed on some jazzy type things. Watched the Dave Chapelle Street Party DVD directed by Michel Gondry.

I enjoyed watching Chapelle with Juan more than I did seeing it with Bill in the theater. Bill and I had a major fight that night months previous. Also drank a lot of wine in 2006.

Eventually had to kick Juan out since the jazzy things and the wine made my eyes heavily lidded. The bed is still here and big enough for two big guys like Bill and myself.

The Last Thing You Should Do, 2007.
Sat around and watched TV with Bill. It was a Monday. No longer at McMann and Tate, but working for the Biotechnology Investment Bank. Content with the job, settled in after starting a few months before.

We watched Big Love on HBO the season finale. I write about Bill Paxton being in a band called Martini Ranch. I wrote about my musical snobbery towards Los Angeles which was unfortunate since I missed a few good bands while my nose was up in the air.

It being Labor Day weekend, there was a BBQ in Garfield. Bill and I got there via Zip Car. I bring a dozen CD’s for a 30 minute drive.

Bill and I arrive before most everyone else. Brian and Karen and the kids show up, and Frank is on the mend from his stroke the previous May. Rob cooks on his grill.

Hot dogs, Hamburgers, Coronas and Guinness. Apparently on the way home and drove by 13 Riverview Avenue as there are pictures that prove it.

Thank You, 2008.
In the midst of the election season. I’m on fire. Sarah Palin. Cotton Hill. John McRage. It’s the republican convention! There are a lot of hands grasping at only a few straws in that crowd.

Everything is anti-Obama. Oddly enough, things are more tense now in 2009 then it was last year.

Tropical Storm Hannah approaches putting the free B-52’s show in Cranford NJ in jeopardy. I run into Casey Chasm twice, in the morning when I’m not at my best and on the return trip when I am at my best.

Work is getting back on it’s knees. The economy is tanking in September 2008. Today they try to pin it on Obama.

I just got a new suit, navy blue wool/cashmere blend, two button. I’m asked to wear a suit since a big wig is expected in the office, a white knight who didn’t do anything.

And the program Open Office was giving me problems, but a year later it’s fine, just fine thank you.

I did not see Vivek at all during the hours I was in today. I asked the intern if she had heard from Vivek and she didn’t but one of the neo-cons piped up and said that Vivek had a meeting at 3:00. It was a good reminder of the bullshit of non-communication that Vivek excels at.

Someone who has nothing to do with Vivek knows more about his schedule than the people that support him.

I did get a green light from New York State and that’s a good sign. I was a bit worried about that. I do have a phone call to make on Wednesday to complete that process. I was fairly busy today and it was weird to be leaving in the middle of the day.

But it was a beautiful day and I got over it soon enough. There is still a mellow sense in Hoboken, like a pleasant hangover from the past weekend. The weekend was a three day holiday, but oddly enough it felt longer than that.

I came home and changed out of my work clothes and into the summer wear of shorts and a t-shirt. Fiddled around at home and then realized that I needed to get some food for dinner.

It was an nice enough day so I walked over to Shop Rite which is further away than the supermarket around the block from my apartment. It’s cheaper at Shop Rite and the employees aren’t as surly. Of course I walk through the door and forget what it was I was there for.

I recovered and picked up some pesto and a few other items. On the way home I walk by where Roda’s mother lives and I see Roda having a BBQ.

I hung out with Roda and his mom and his cousin Tony. Roda’s kids, Logan and Autumn were there of course as well as a few other friends and family members. They invited me to stay for dinner but I had a bag full of groceries.

It was tempting but I came home and made myself my usual weekend fare of pesto, chicken and pasta. It was good and I’m satisfied. I’m going to try and use Rand’s method of eating. 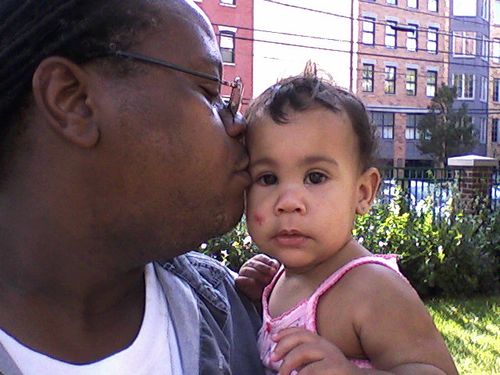 ps- I heard a club music version of Journey’s ‘Don’t Stop Believin’ this afternoon. It chilled me to the core.