Today was an exceptionally shitty day. Decided to forego the Xanax and went in freestyle. I figured that since I wouldn’t be closing with Calvin it would be OK. It was almost OK. Calvin had the usual 2 hour liquid lunch, interrupted by yours truly when I was doing something and before I completed it, decided to check with old’ Calvin to see if it was done correctly.

I was never trained on anything properly in the cigar shack and felt it would be best to get a green light. The look of resentment on Calvin’s face was priceless and worthwhile and there was one tiny thing that I did not do which the lush noticed before heading back to the man cave to continue puffing on his cigar.

It isn’t easy trying to be busy for 9 hours in such a small space with cameras constantly watching. Still I persevered and was a bit stressed while doing so. I thought things would be better when Der Fred came in but he was more of a pain in the ass.

Constantly busting my chops, but to Der Fred’s credit, not once did he ask how I could work there doing the same thing over and over and over again, day in and day out. After I came back from my lunch at 5:40PM, Calvin seemed to be feeling no pain and had this bright idea to remove a bunch of mini cigars that arrived yesterday and put item numbers on them.

For some reason, Marcus ordered quite a bit of mini cigars and no one ever buys them. But just in case they do, we now have hundreds of them, just collecting dust waiting for someone to purchase them. We obeyed the lush’s suggestion and started moving the mini cigars into the man cave, when I got fed up and decided to just label them where they will be sold.

Much easier and no need to move a whole bunch of shit. I think Calvin just wanted to get Der Fred and myself out of the front of the store and increase his sales and also make phone calls. Perhaps make phone calls to any of the four young men who stopped by the cigar shack today and dropped off resumes.

Calvin left an hour after signing out, just sitting by himself in the dimly lit man cave and enjoying yet another cigar, postponing going home to the wife and kid. I guess there are something’s he just can’t do at home. Der Fred and I closed the shop, things were easier with Calvin finally gone.

I closed the shop solo and headed to the subway. Hyman Gross is back in Hoboken and I missed him the other day, opting to take an earlier bus. Tonight after the day that I had, decided to catch the earlier bus since I needed to go down Washington Street.

As I descended the stairs to the subway, my cellphone rang. It was Hyman. I answered but there was no one on the other end. I hung up and saw that an express train pulled in and got on board, making it to the bus terminal in no time.

I tried calling Hyman back once above ground but got no answer. I texted him saying that I would be on the Washington Street bus as I approached the gate for the Hoboken bus. I noticed two policemen standing over someone lying on the ground and hoped that it wasn’t Hyman. It was Hyman.

Apparently he collapsed and the police were going to send him to Bellevue, when I called Hyman’s name and he recognized me. One of the cops helped me get Hyman to the gate where we waited for the bus which drops him off about 20 feet from his apartment.

That bus arrived and I was surprised at the understanding of the other passengers, allowing Hyman and me to take our time getting on the bus. Hyman said his knees locked up and caused him to collapse. He also said he was on Xanax, as well as another medication and also took a caffeine pill.

We got off the bus close to Hyman’s apartment, things going slowly but going nonetheless. As I got on the step, using Hyman’s key to open the door, he collapsed again on my foot. I knocked on a neighbor’s door for help despite Hyman’s protests but there was no one home anyhow.

He lay there confused, not knowing what happened and kept blaming the Xanax. I called the Hoboken Police department and requested they send an ambulance to Hyman’s building. I waited with Hyman for the ambulance which seemed to take forever to arrive.

Hyman was nervous and we did get him up and I set up his walker for him to lean on. I also used his keys and opened the door to his apartment which could almost make the Collyer brothers look like minimalists. The smell of mothballs was overwhelming and I could easily understand why an 80 something year old man would not want to spend his days there.

He also had a plastic shopping bag and was terrified of losing it. When the paramedics arrived they helped him out and I put Hyman’s bag in his apartment, shut out the lights and locked up. I told the paramedics all I knew about the Xanax, the caffeine pill and the other medication that I couldn’t remember the name of.

I made sure Hyman got into the ambulance and told him I would stop by the hospital to see him tomorrow. It’s my day off. 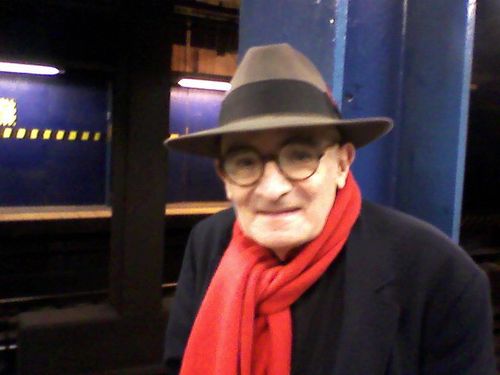