A day off. And it’s been a productive day again. Slept fairly well last night, had dreams that I remember. One dream featured my mother and it was a nice feeling to see her again. That dream either involved or preceded a dream that involved a varsity jacket that had NUTS written on the back.

I’m not sure if that meant a scrotum or in fact something to do with the state of mind. Then at some point after that I had an itchy palm which to superstitious folk (which I am sometimes) means that I will be coming into some money.

I eventually woke up around the usual time to the sound of Barry White singing ‘You’re My First, My Last, My Everything’ which I took to be a good omen since Barry White and I were both born on September 12.

Bill took the day off since he was feeling exhausted and in need of a rest. I puttered about as usual making some coffee, pouring some cereal and showering and shaving. I had time to get myself ready to head out, and Bill eventually got out of bed to offer his support once again.

I got it together and though I couldn’t find the suit that I wanted to wear (superstition again) I did find another suit that did the job just as well. I wore a belt instead of the braces I usually wear. I thought the braces would have been a bit much, a bit overreaching for a job interview, even though it was for an investment institution.

I thought it would be best to dress like I was in an office support position rather than dressing like an investment banker. Braces make people think ‘stock broker’ or ‘investment banker’ so for an administrative position a belt was in order.

There was a slight snow storm outside as I walked to the Path train, heading to the World Trade Center stop. Of course I was crazy early so I decided to stop by Century 21 and looked at some clothes to kill some time. I still was early after that, but only five minutes early.

I made it to the building and checked in with security. A phone call was made to the woman I was supposed to meet, Shirley. Unfortunately Shirley was unavailable and her voice mail was reached. I of course panicked a bit, but thankfully, having had half a tablet of Xanax it wasn’t so bad.

I hung around for a few minutes until the security guard called me back, Shirley contacted him and I was granted access to the 14th floor. On the 14th floor was a security guard who escorted me to the 12th floor, where I was shown to a conference room overlooking the Hudson River.

It was an impressive sight, a snowstorm was going on and I saw various boats and tug boats going up and down the river. I was tempted to take a photograph of the view but decided against it. This was a serious job I was after and no artsy shenanigans were to be had.

Shirley came in and we seemed to hit it off quite nicely. They need to fill this job which is basically a job that I have done for the past 10 years and did an exceptional job I might add. After a few minutes with Shirley, I met Nelson, who if I get the job, I would be working with.

All around it was a 45 minute interview. Thanks to the Xanax I don’t think I had any scent of desperation on me. Shirley and I talked some more, she showed me the offices as she walked me to the door. I think it was a good sign, for why would they show someone the office to someone who had no chance for the position?

It had basically stopped snowing as I headed back to the Path train, and I stopped in Century 21 and picked up some nice cufflinks as a present for Bill. Back in Hoboken, the Path from Hoboken to the World Trade Center is about a 15 minute ride.

I stopped by the Guitar Bar and picked up some cigars that I had shipped last week. Calvin had something in the order which made me think that was why he was being relatively kind for the past few days.

When I give Calvin the cigars tomorrow when I return, I wouldn’t be surprised if he goes back to being a dick again. But that’s then and not now so as far as I’m concerned the cigar shop simply does not exist for me. It would be nice to get a Monday through Friday job again. I liked the people I met today and I hope they liked me.

Also talked with Harpy for a bit as well as a nice talk with my dear friend Billie in DC today. Billie’s still looking for a job, he’s been out of work longer than I have. I wish him the very best in the world, he’s my chocolate sister and I love him very much. 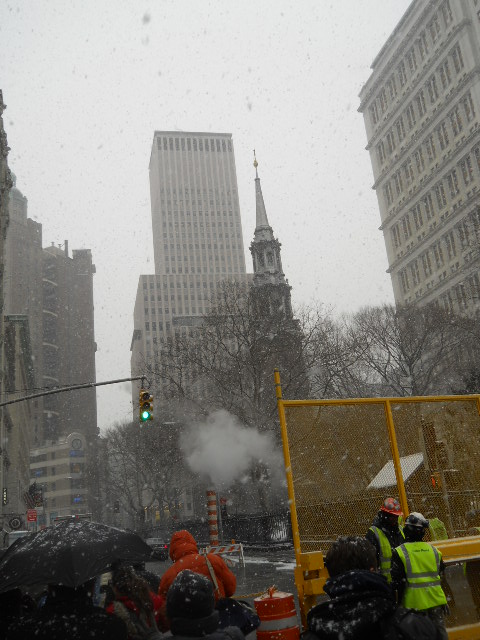