Notes from today. On the Long Island Railroad (LIRR) then a transfer in Jamaica to Far Rockaway. A woman sits across from me eating an ice cream cone with a spoon.

Last night before heading out to watch the fireworks, I watched True Blood. Bill phoned midway through causing me to miss some plot points. No worries I think, I will just catch the west coast broadcast later on.

And I do. And Bill calls once again at almost the exact same part of the show. So I will have to catch it some other time, perhaps when Annemarie is within the vicinity.

I got a phone call before True Blood from Rand. He and Lisa & Lois and Fred were going to have a cocktail and then go see the fireworks. I tell Rand my plan. Watch True Blood, go drop off a birthday card to Bill’s office and a note to my cousin Joe at the Post Office, and then watch the fireworks on Pier A.

Rand gently mocks me, for wanting to ‘watch my shows’.

As I headed over to the Post Office, sans iPod, I overhear a male couple returning from the Gay Pride parade talking about me, saying ‘Yeah, he is.’ I smile.

The fireworks were nice, would have been nicer if Bill was around, but he was driving a bus back to Wallington. Rand & Lisa and Lois & Fred watched the fireworks from Stevens Point. Difficulty sleeping last night.

Awake at 2:15 after going to bed at 12:15. Got up when Bill came home. Of course he’s out cold, minutes after his head hits the pillow. I think I finally feel asleep around 2:30. Luckily I didn’t have to wake up early.

While waiting to buy tickets for the LIRR, I get a phone call from Calvin. He had forgotten I was out on Long Island to take a certification test to sell cigars and tobacco related products in New York State. He arranged the whole thing for today a few weeks ago.

Thanks to train schedules and Bill’s planning (I love him for that) I am an hour early. I sit in the shade of a first story garage underneath an office building and smoke a cigar. I go inside the air conditioned building and sit and wait in a class room that also serves as a conference room for a lawyer that shares the office space.

We watch a videotape of Linda McKenna teaching a room full of actors how to ask for ID when someone who looks under the age of 25 tries to buy tobacco. What to say, what not to say, how to handle the situation when a teenager needs his nicotine fix and has the potential to get cranky.

I remember buying smokes for my parents, Marlboro for mom, Kent for dad with no questions asked at Gallo’s drugstore. But there were no laws then regarding the sale of tobacco to minors then.

The class itself was directed by Ralph, an amiable older bloke with a passable toupee on his head. It was over in 90 minutes. Ralph pointed out the contradictions from the VHS tape and the Power Point presentation.

At the Lawrence trains station waiting for the train back to Jamaica to transfer to a train to Penn Station.

At 4:44 the train arrives and I am once again leaving Long Island, heading towards Manhattan. 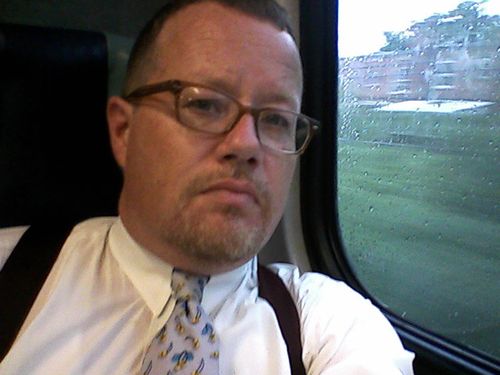