Oh my, what a day this has been. It started out OK, I slept in a bit since I was working the late shift. I was able to relax and start the day at an easy pace. It wasn’t as hot out as it was yesterday and that was a plus.

I soon found myself walking up to Washington Street where I waited for the bus opposite Hoboken Daily News. Got on the bus. Another advantage of going into work later is that there are less people on the bus.

Still plenty of traffic at the tunnel though, but like yesterday I had a competent bus driver who knew to aim for the middle tunnel and avoided a lot of congestion headed into the right tunnel. I soon found myself on the A train, making it on board just before the doors closed.

The strap on my Eagle Creek bag broke, just days after getting it back from Inwood NY where they fixed the zipper. Totally threw my body English off.

Bill phoned to tell me his supervisor had just been let go from the law firm. That was unnerving for the both of us. They’ve been letting people go every few months and I hoped this wasn’t that again. And I was worried of course for Bill’s standing at the firm.

He’s OK which brought some relief.

I had a few minutes but decided to head into the cigar shop. It was Marcus and Raymond, both telling me that I just missed something. Apparently they banned a customer who was caught on tape cramming something into the door after the store was closed.

It was a goofy thing or so I thought.

Little did I know the situation was going to go swiftly downhill. Raymond came in a few minutes later and soon he was in the office with Marcus and Calvin, door closed. I did whatever it was I do in the morning.

Marcus had me counting boxes in the humidor which is when Calvin and Raymond slipped out. Apparently Raymond messed up on something and though he owned up to it, they don’t trust him anymore, taking away his key and not allowing him to close the store anymore.

They also took his vacation days away. He’s on probation. Having written that I realize that I think Raymond might have had someone in the store after closing. The person bought something and since the register was closed, he took the money and put it away.

Later on, that someone crammed something in the store door. Of course I could be wrong and this is my deductive reasoning. Law & Order is on right now and Bill’s watching it so that could be the impetus for my detective skills.

So that hung over the store all day. Yesterday it was a lot of laughs and good times with Sean and Don Birch and Calvin & Raymond. Today it was all about the pall. Raymond also organized a cigar dinner which he is now dis-invited to.

He told me these things in bits and pieces while mumbling. He told me he left a note about the money and he also sold more things that Calvin and I did today. He sold $2,000 worth of items where Calvin & I made just under $1,000 a piece.

On July 1, I will get a key to the shop and also be closing as well.

Maybe I won’t write. It depends once again on what happens I suppose.

Lot’s of slow sausages on the street tonight, and having to carry my bag instead of slung it over my shoulder, made my hustle from the shop to the bus terminal last 21.9 minutes. 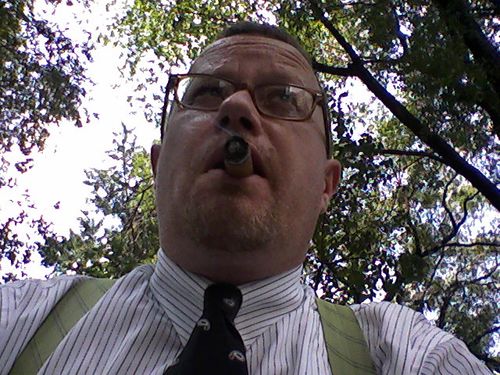