Written the night before as I am working the late shift again. It was an interesting day again. I opened the store after having Wednesday off.

Don Birch had opened at 9:00, a half hour before me. Marcus came in after me. It was a little bit busy, but when Raymond showed up at 11:30, there wasn’t enough busyness to go around. I took lunch at 1:00, Marcus was soon off for the afternoon going wherever it is that he goes.

I said I would see him tomorrow and he replied that he might be back. He says that often enough and never comes back. I had a decent cigar after eating lunch but felt a bit of a chill as I sat on a bench by the park.

I decided to head in when the cigar extinguished itself and finished it in the back room. No World Cup on the flat screen, but rather boring old golf. Fifteen minutes later I was back at work behind the counter.

Raymond mentioned that with Calvin off today and Marcus away from the office I could have easily relaxed for a few more minutes instead of rushing to finish the cigar. I didn’t mind. The afternoon crawled a bit and I thought I might have been getting sick.

Mind over matter I said to myself and had a banana shortly afterward. I did feel better after the banana. I eat a banana almost every day that I work. Sean, the part time employee was a bit late coming in and Raymond, Don Birch and Sean almost immediately fell into sniping at each other.

I wisely stayed above the fray. When Calvin and Marcus are out, they do something called Round Two, which is basically a chance to sit in the back room and have a small cigar and relax. It was Raymond and myself in the back room when Don Birch who was supposed to watch the counter, decided to go to the lavatory while Sean maintained the humidor.

Raymond was a bit upset at that and went to the counter when Marcus came back, surprising everyone. Don Birch had left the lav and told me Marcus had returned. My timing was perfect as I was also talking to a customer in the back room when Marcus came in with some representatives.

No one was caught sitting down, least of all, me. My three co-workers stood around the counter and continued sniping at each other while Marcus and company sat and smoked and drank in the back room.

I didn’t feel comfortable hanging around the counter so I opted to check the inventory in the humidor. Eventually Marcus’ fiance came in and a few minutes later Marcus and company with the fiance headed out and the three co-workers continued sniping.

Tonight, I made it from the shop where I work to the bus terminal in 17.8 minutes, thanks to Beck.
I may not write tomorrow since it’s been so ling since I’ve taken a day off from writing. Still, if something happens then I more than likely will write. But if not, then I won’t. 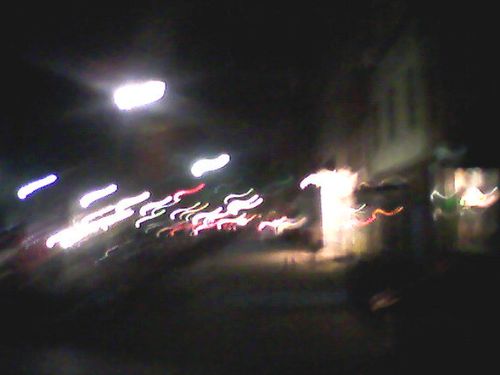