Updated @ 11:00PM
Puttering around. Late shift today. First time. I doubt if I would be able to write enough and still get a good night’s sleep so I am going at it right now.

Before 9:00 AM. I will be working from 11:30 to 9:30 today. And I guess I would probably be getting home around 11:00 tonight. I just checked an email, I forgot I signed up for tickets for the Colbert Report tomorrow and I regretfully had to cancel.

Last night I saw Bill in a play at Theater for the New City, Tiger Tiger. I took the Path train in and got off at 14th Street.

I wasn’t sure if the theater was on First or Second Avenue so I called Google 411. It’s an automated service which was useless. They could not understand the word ‘theater’, but then again a lot of people can’t either.

I gave up and used T-Mobile’s service which had a human being who told me it was on First Avenue. I walked down Fourth Avenue and strolled by where Farfetched used to be.

Still a dark hole of a store which is the intention for the goth set. I guess they’re doing well. It was a trip of sorts walking through the East Village since I hadn’t been there in a while. It was energizing.

I had a bag of clothes that Bill had forgotten, as well as some of his head shots. I made my way to the back of the theater where I met the rest of the cast, Bill and five women.

The play was a bit unnerving. It was an almost full house and the subject matter involved Bill being a child molester. Sufficiently creepy.

Some of the audience thought it was funny though I really don’t see how it would be intended to be humorous. The acting was well done though, with some tech things overpowering the lines being said.

After the show I helped Bill get his things together and carried them home while Bill went to the cast party. Took the Path train from Ninth Street and after a wait of a quarter hour I was headed back to Hoboken.

Deserted streets at 10:30 on a Sunday night. Home by 11:00, Bill was home about 45 minutes later. We talked about the play and soon he was in bed, I stayed up a little while later, exchanging messages with a Facebook friend is Los Angeles, whom I’ve never met but reminded me that I am more than my job.

He has a few other friends that are rejoining the workforce and that it’s difficult for them too. Touching that someone who I only know online is concerned for my well being. How fortunate am I to have people like this in my life, both physically and online?

Now it’s getting close to the time I should start moving. It’s cool enough for me to take Bill’s suggestion and go to work, wearing the suit, with a towel and some extra t-shirts.

Have a good day. 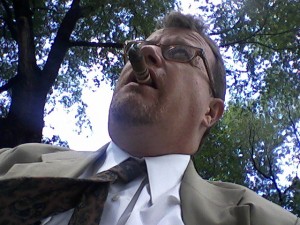 Update:
Todays guests at the shop, Al Sharpton, A skank with boobs falling out complaining about how cigars smell and then asking for a job, a Mama’s boy, 2 Rwandan diplomats.

The guy I was supposed to be replacing by August was fired today. That speeds up whatever processes I might have been involved in (which could be a good thing).