Well it’s been a day unlike any other like all days are. Today, the first Saturday in March is the Fake Patrick’s Day parade, which causes a lot of youngsters to come to town and get properly shitfaced.

For some odd reason, they decided to allow the bars to open at 9:00AM instead of 11:00 like most weekends. I really couldn’t say since I am not a fan of drinking during the day. Maybe if at a barbecue that’s acceptable but otherwise it just screws up my sense of time.

Last night, Bill wore his mouth apparatus and his apnea mask so no snoring from him. We both got up around 8:00 and I found myself online outside the bagel shop at 9:00 while newly legal boys and girls were queuing up outside bars and pubs.

All these newbies on line to get green bagels. Bill was across the street waiting for his bus and by the time I made it into the store, Bill was on the bus and Rand was at the end of the queue for bagels. I hooked Rand up and got him 2 everything bagels and half a pound of tofu so he didn’t have to wait as long as I did.

I came home, and fixed myself a nice breakfast. I made plans last night with Rand to check out the parade with him and Lisa at 1:00. Bill and I were invited to a brunch next door in the building and I did have plans to check it out.

A few years ago Bill and I bought Kelly green scarves at the St. Patrick’s Day parade in Manhattan and I spent some time looking for mine to no avail. I did find a big bag of photographs which I had forgotten all about when I moved back to Hoboken 8 years ago.

Back then, before digital cameras I would have my photos developed onto a Kodak CD. This morning I found myself pouring through a bunch of photos and CD’s and decided to upload some pictures from August 2000. A party in Hillsdale with my brothers, their wives and their kids.

Annemarie wasn’t there and I hadn’t met Bill yet. I did have to resize about 15 photographs. Before I knew it, it was time to go to the parade.

Instead of just showing up at the brunch for a few minutes and leaving I opted to head for the parade instead.

I stopped off at the library and dropped off Old Boy, a Korean DVD which I was disappointed by. Perhaps it was because I chose to watch a dubbed version instead of subtitles, but I knew what was up when the lead character was in the sushi bar. I

t seemed obvious to me and by the end I didn’t care a bit.

The streets were crowded with people wearing the green. I wandered over to my usual spot at Sixth and Washington and started taking pictures of various characters and what was going on around me. Rand and Lisa eventually showed up and the parade was highly entertaining.

All together the parade lasted for an hour. No once accosted the Guinness guy which was nice. There seemed to be a lot of watchers this year than previous years. Perhaps it was because it was 57 degrees out, whereas last weekend we were all digging ourselves out of 14 inches of snow.

During all of this I got a phone call from Pedro who was asking what I was up to. He was headed into the city, had to get out of Otisville. He mentioned some art show he wanted to check out on 34th street. I told him I would give him a call when the parade was over.

Rand and Lisa walked me over to the Path train through the throngs of drunken revelers. The train was pretty crowded to 33rd street so I stood. When I got off the train I called Pedro and got his voice mail. It was OK, I had a back up plan to go up to JR Cigars and get some discounted cigars.

Spoke with Annemarie on the phone after dealing with a guy in the cigar store who didn’t know too much about cigars. I admit I was a bit gruff talking to Anne on the phone. She thought I was wrong not to go to the brunch where I didn’t think it was that big a deal. I did buy my neighbor a silk rose in the colors of the Irish flag and taped it to her door with a note.

I made it back to the Path train and git a seat for myself for the ride back to Hoboken. Had to pee so I went to the train station lavs which smelled of stomach acid. Had to pull my pea coat over my nose to mask the smell.

Ran into Julio, Stine and Alexander who lost some weight from being so sick the past week. Julio asked who John was and once again Alexander pointed to me, which was so sweet. He also shook my hand when I decided to head upstairs.

Took over 100 photographs today which I spent time uploading to Facebook. Finally after not eating anything since breakfast, I decided to make some dinner. As I sat, about to eat my cellphone goes off. It’s my sister in law Elaine.

She’s worried about Corrine who was having a lousy time in Hoboken. She wants to come over but doesn’t remember where I live. I tell her she’s more than welcome. Corinne called Elaine from somebody else’s phone since her own phone died.

I leave my food on the table and walk downstairs where I see Corinne outside with some guy who was nice enough to see her crying and loan her his phone. She thanked the guy and came upstairs a little bit drunk.

We passed some drunken party-goers or leavers from the brunch next door on the stairs. I hooked Corrine up with some water and sat her on the couch. I offered her some food but she wasn’t hungry. I played some ambient stuff sat and ate in the kitchen while she fell asleep on the couch.

After I ate I called Elaine to let her know Corinne was alright, still breathing and asleep. We discussed getting her on a train home but decided to have Elaine and Frank come down to Hoboken to pick her up.

Corinne eventually woke up in time to watch the Office before we headed downstairs. She’s a good kid, just a little drunk, a little forlorn. Who wasn’t at age 23?

Now I’m writing this, the TAMI Show is on public television. Quite good. James Brown definitely stole the show. The Rolling Stones, so stiff compared to the Godfather.

That’s about it for a busy day. Here are some pictures from today. Enjoy. 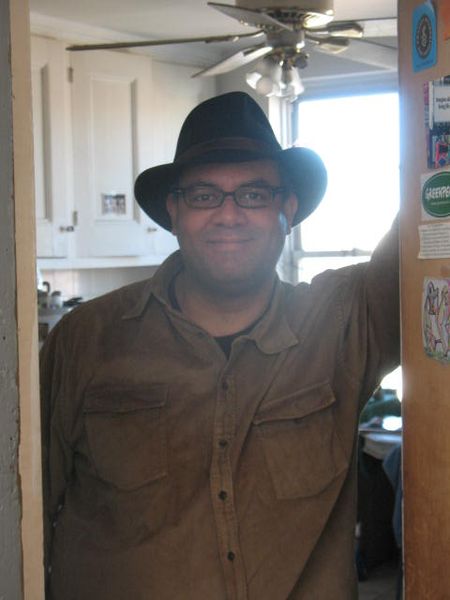 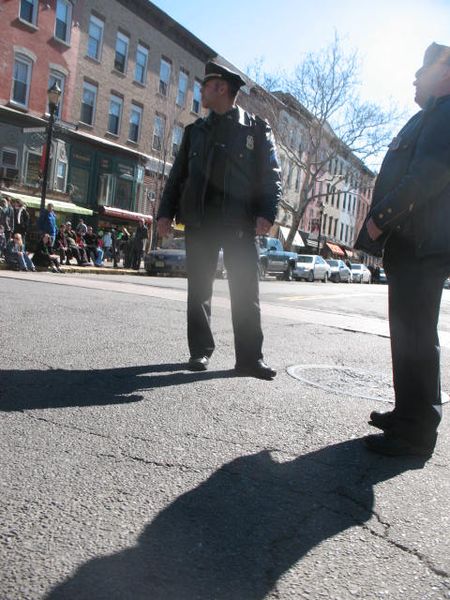 Out in force today 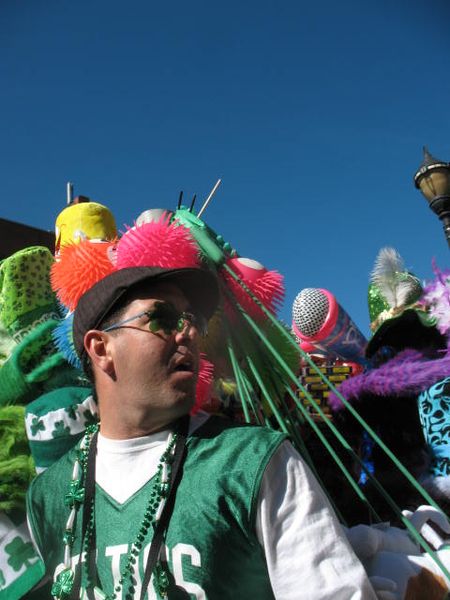 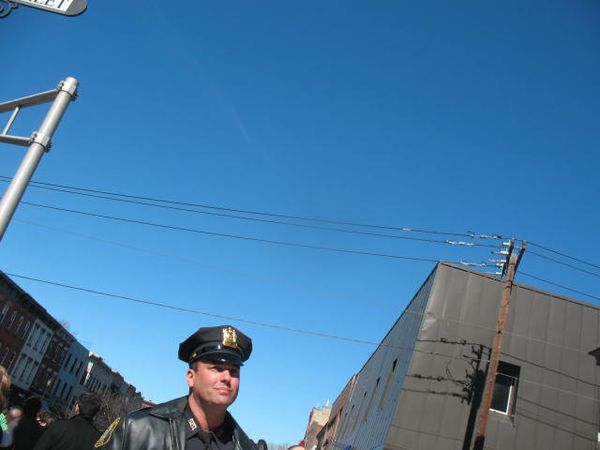 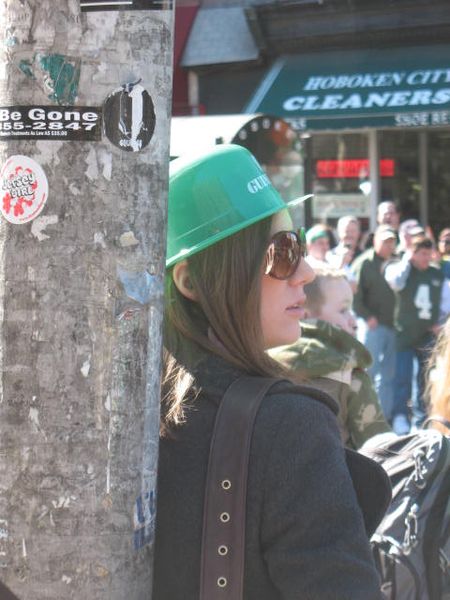 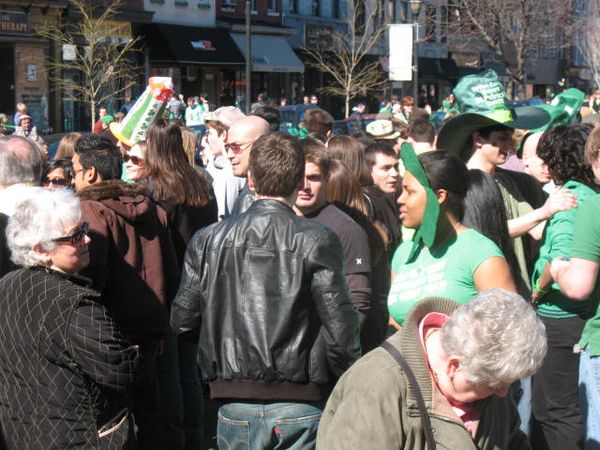 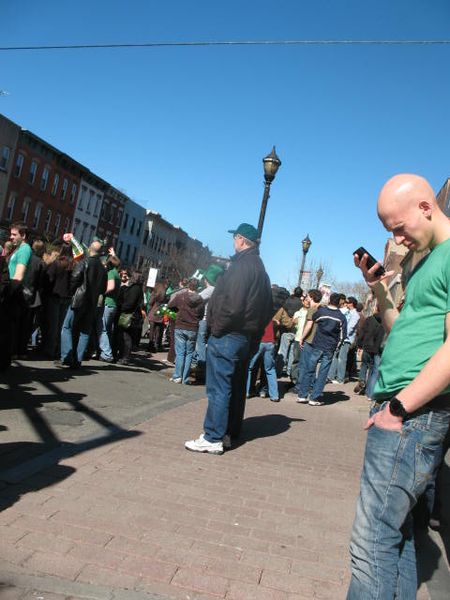 This bald dude said he received a $2000.00 summons for an open container 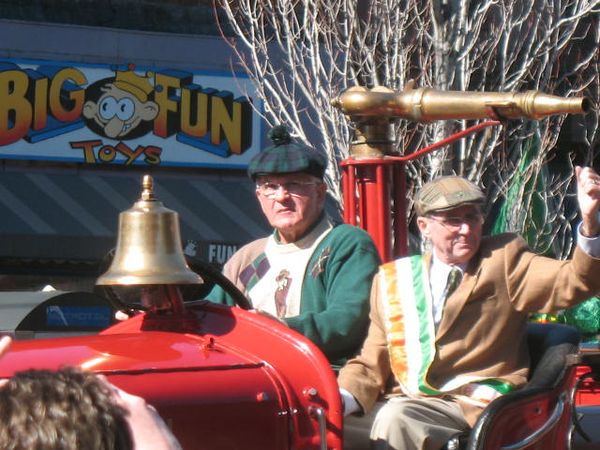 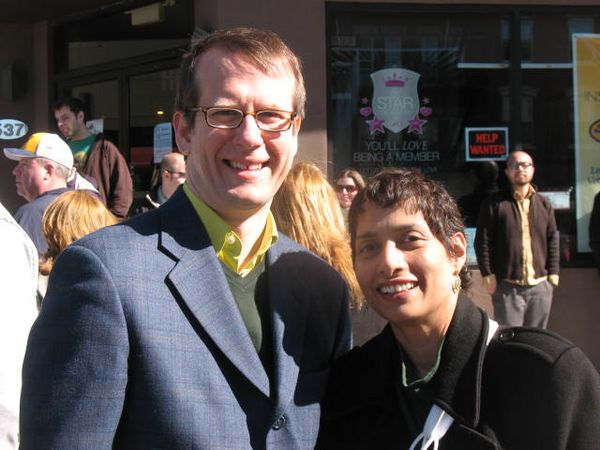 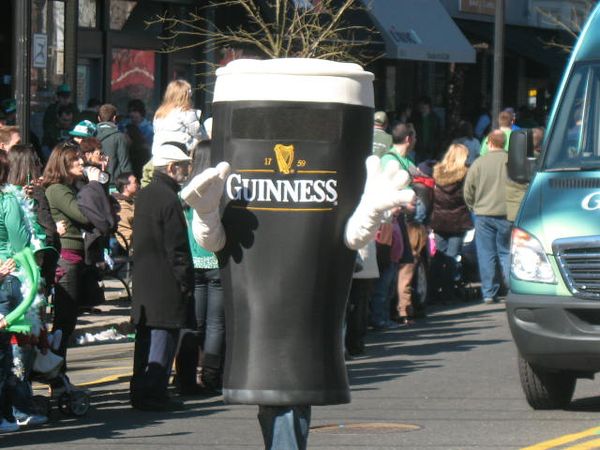 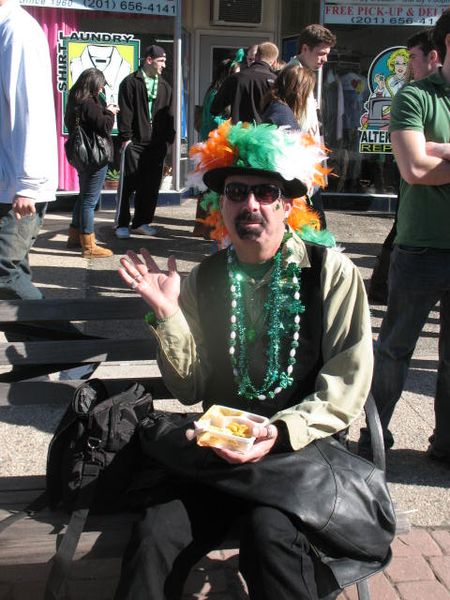 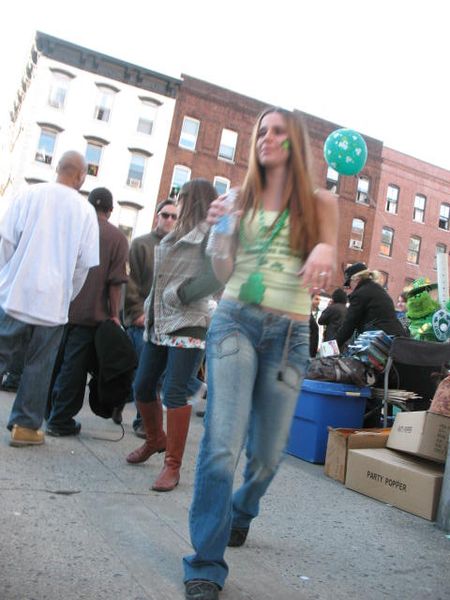 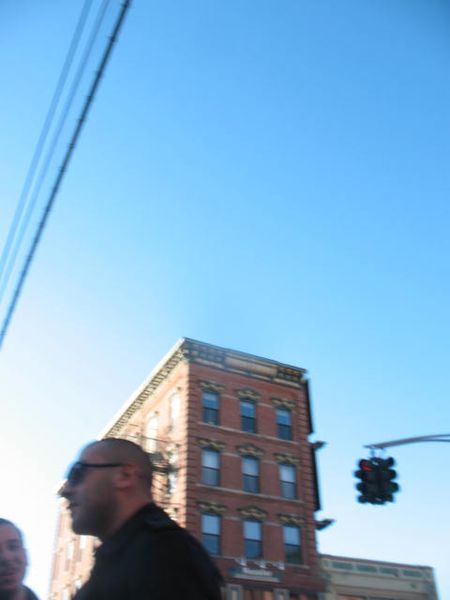 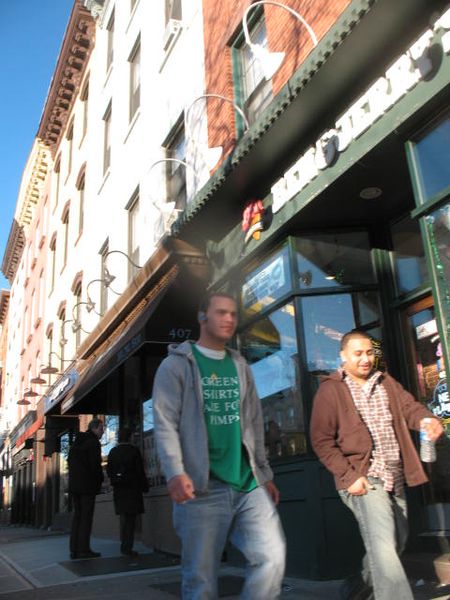 Green shirts are for Pimps 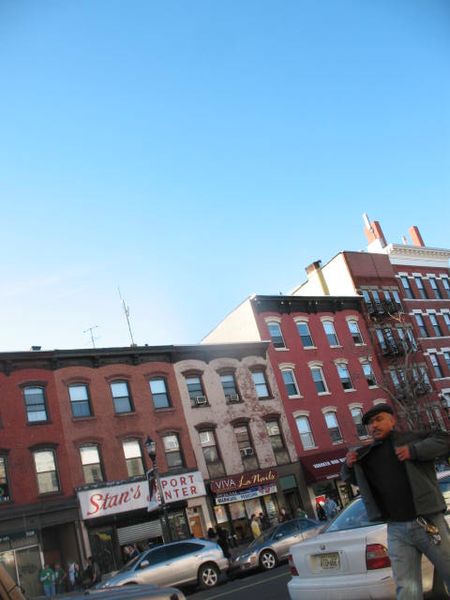 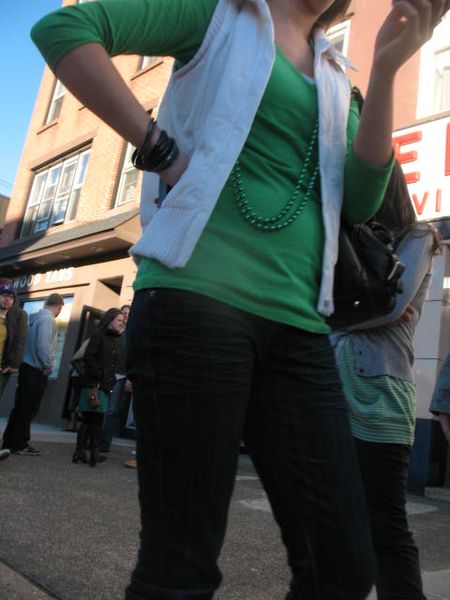 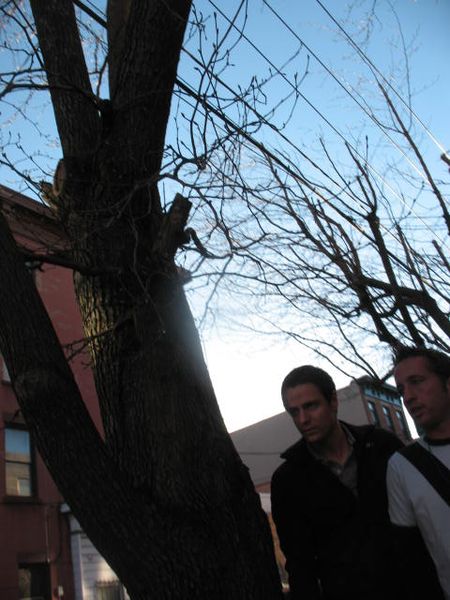