Ideally she would have all of her faculties, no hip replacements, no ailments. But between now and when she passed away a lot of these things could have happened. So even though I miss her, those ailments etc would have possibly made her a changed person than the woman we knew and loved.

I guess I had a different relationship with her than Frank, Annemarie and Brian did. I was her baby. She was pregnant with me when she had a heart attack so there might be a bond there.

The last of the line, and I was the one crying and screaming as they had to pry my 5 year old fingers from the fence when she would drop me off for kindergarten, which was more than likely the start of my separation anxieties.

In 1976 my mother and I went on a bus trip to see the Pennsylvania Dutch country.

I had just graduated from St. Francis de Sales, the last months before puberty hit and changed everything in my world. Just me and my mom on a bus looking at how pretzels are made, visiting the Hershey Chocolate factory, next to the amusement park. It was a good time.

It was only a 3 or 4 day trip, staying at a hotel in Reading PA. We also visited an Amish farm watching them make shoo fly pies and riding around on their buggy’s. Things change of course. I also met a girl who I assumed would be my girlfriend.

Her name was Rosemarie Buckawyn from Ridgewood, Queens. For her it was sort of like the Fresh Air Fund, she had never seen grass before it seemed and thought grass died after you walked on it. Nothing happened between us though we did hang out for a couple of days.

She was with her grandmother and we exchanged addresses so we could be pen pals. We exchanged a letter or two until in her letter she wrote that she had experimented with marijuana and liked it somewhat. I was put off by that, being somewhat puritanical in those days and broke off all communication since I didn’t want to be a pen pal with a ‘junkie’.

I never told my mother about that.

A few years later, my mother and I were walking home from my brother Frank and his wife Elaine’s apartment a few blocks away. She sort of knew that my brothers both were hop heads and she was worried that I would be the same.

As luck would have it, I eventually started smoking pot. I wanted to be as cool as Derry Pedovitch. Derry’s mother had cancer and he was supplying his mom with pot to ease the chemo side effects.

So I’m sitting in my parent’s house on a step between the kitchen and the back porch and my mother asks if I am smoking pot. I ask her why would she ask that and she said, I just come home and head for the fridge and eat and I am always tired and my eyes are sometimes blood shot.

I decided to tell her the truth, that yes I smoke pot, and that I think it’s better than alcohol and I think she should try it before she knocked it. I probably broke her heart saying that but I didn’t want to lie and thought she really should try it. She never did.

We did become friends though, my mom and I from working for the book company. She was in the office and I was in the warehouse constantly fucking up. But she was so well loved and regarded that almost all of my sins and mistakes were generally ignored.

I even got drunk with her a few times at company Christmas parties and end of season Bowling dinners.

So with a puff puff pass, I salute my mother with an exhale towards the cosmos. 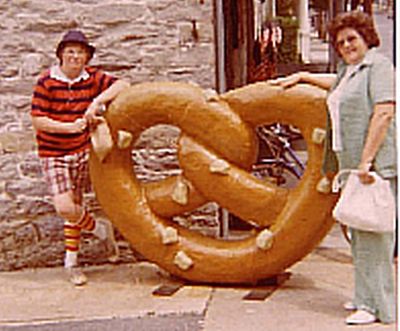