OK, I’m cheating. I am writing this the next day since it was too late last night and I just didn’t wanna. The cheating part will be when I post it under yesterday’s date. Yesterday was a slow day. Slow enough to warrant a nap.

And nap is what I did. After running errands, doing laundry and cleaning up the apartment some more. Heard from Rita, thanking me for her birthday card. Also heard from Earl, thanking me for the Beatles CD’s I gave him.

Since I bought myself the remasters I decided to give him my older copies. Heard from my brother Frank who was just checking in. Told him all about seeing Leon Russell the previous Sunday. He was off to his 40th High School reunion.

Nice that he goes to these things. I doubt if I would ever go to my 30th which would be next year. I learned my lesson at the 20th year reunion. I lived life for 20 years without seeing my former classmates and plan on continuing to do so without seeing them ever again.

I was invited to a Yahoo groups function in the city and was mostly wishy washy about going. When I woke up from the nap I was still wishy washy. But like the drone I used to be when I was working, I got out of bed and put on a suit and tie and got myself together.

I have been meaning to mention that now I feel really unemployed since I canceled my bus pass and since I don’t have a bus pass anymore I decided to take the Path train into the city. Plus at the hour of 6:00 it made more sense to do that rather than sit in traffic at the Lincoln Tunnel.

I walked up to west 46th Street to the Ritz Bar where the function was taking place. It was similar to the Yahoo group parties I used to go to a few years ago. I met the guy who invited me, Gary from Los Angeles and he was quite happy to see me.

I almost didn’t go but Gary was glad that I did. Also met Rob who is someone I’ve chatted with a while ago. He used to live in Hillsdale, now he lives in Freehold. It was a nice group and it was definitely good for my ego. And it was a good networking opportunity.

I had a few Stella Artois and after an hour or two I was headed to Hoboken to have drinks with Rand & Lisa, to celebrate RoDa’s birthday. I had burned a few CD’s of Girl Talk, Air & Scritti Politti for RoDa. I’ve talked those groups up often enough that it made sense that RoDa should actually hear them.

I stood outside having a smoke when Bill ambled up. I told him about meeting up at McSwells and was surprised to have him show up. He likes RoDa too so it made sense.

Lois and Fred showed up with Rand and Lisa and we all sat at a table, munching on curly fries and having a few drinks. RoDa was actually working so he couldn’t sit with us the whole time but did hang for a few minutes here and there. It was a nice, sort of impromptu night.

For me, there was enough Stella Artois to not want to write last night, but here I am now, trying to make amends. So there. 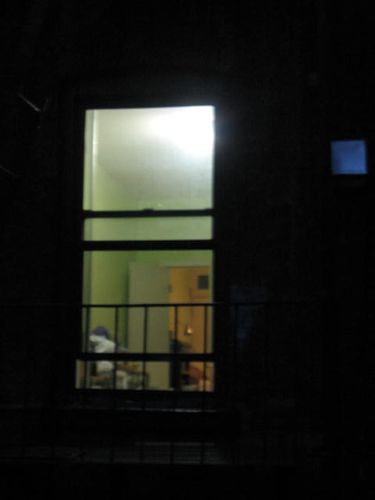 The apartment next to the Ritz Bar.