Well today I came to the realization that I am addicted to the Internets. I do spend a lot of time online and sometimes find myself away from the computer thinking about what is going on, online. Today was no exception.

Now I am a member of a few Yahoo groups, one of them pertains to big men. Big muscle men. A stereotype I know, but it works for me.

So the other day I get a posting in my email with some pictures of a certain body builder, really phenomenal. Who cares if he can barely complete a sentence. Maybe he can, I don’t know. Stereotyping again.

Anyhow, I was smitten. Plain and simple. Enough so that I replied to the whole group like most everyone does, and I used one word, ‘DAMN’. What guys say or think when they see a hot guy or girl, DAYUM. He was hot or hawt.

This wanker in the UK, some older flabby geezer took offense to my one word comment and decided to speak on behalf of all those who could give a shit. But me, being me of course kept taking the bait this fallen Mr. Clean looking type put out there.

It escalated this afternoon to the point where I just had to leave the apartment, he was potentially ruining my day. I did feel bad for this geezer, such a lonely chap living by Heathrow.

I’m sure the planes taking off and coming in would have an effect on this misbegotten son of a slug and he decided to go after me. With horrible spelling at that.

He was trashy and offensive enough that I felt compelled to head into the city and seek refuge by the skate circle. I took the Path train in and walked to Grand Central Station, then the train up to 68th Street/Hunter College.

It is the last Sunday of the summer.

I walked over to the park, tons of tourists. I enjoyed another cigar that Bill gave me and sat on top of Bear Hill overlooking the skaters. This UK arsehole got under my skin enough that it took a while to relax and chill out to the music.

It was a beautiful day though, people with dogs socializing with other people with dogs, some baby wrangling going on. A woman with her baby was trying to position her toddler so the photographer could take the picture with a Wish You Were Here/Happy Birthday balloon just so.

The DJ was really cookin’ when they stopped things so they can eulogize someone who was no longer with them. Apparently he passed away during the week. It went on and on enough to make me realize that I was hungry.

Walked through midtown, chatted with Planet Bernadette calling from the ledge. I followed Bill’s advice and avoided the bus terminal. Sunday evening the Lincoln Tunnel is packed with people coming back from wherever it is that they were.

I got myself a seat and regretted not having something to read. All I had was the New Yorker and I had read it already. Still, it’s good to be home, UK wanker geezer has been marked as spam so I won’t be hearing from it anymore. 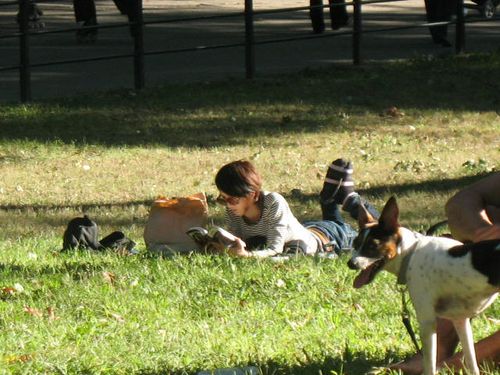 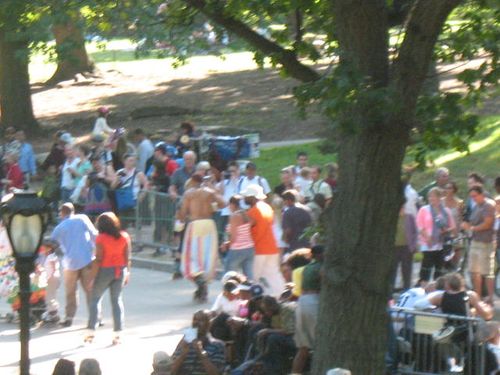