Do a search on this blog for Cafe Press T-Shirts and see what comes up.

That’s how I will be paid in the blogosphere for the work that I do.

Last night Bill came home and took a nap asking me to wake him up at 9:30. At 9:30 I went to wake him up. He had no idea what time it was or where he was it seemed. I decided to let him sleep, if he gets up he gets up.

I watched Weeds last night. Very good. And Justin Kirk is really great as Andy. The whole episode was quite good but Andy’s scenes were the best, very touching.

After that came Nurse Jackie which is also very good. Perhaps they are trying to cram a lot into 30 minutes, but they managed to pull it off.

One of the story lines on Nurse Jackie was about a Russian immigrant who had a stroke. That hit home. The actor was great, didn’t get his name though.

As his family bickered and attacked each other as well as Jackie who was actually the only who was able to get through and understand the effects of a debilitated stroke victim. I still think Brain Attack is a better way to confer what a stroke is.

In my younger days I would have written Brian Attack due to the antagonistic relationship I had with my brother Brian. Went to bed a little while after that and woke up with Bill who had slept the whole night kissing me goodbye at 7:00.

I got out of bed and showered and shaved and got myself ready for the days collection of Sally Maurice Kotex. Greg Stevens called as I was heading into the office. He was afraid his computer crashed since he was out in the Hamptons over the weekend and couldn’t receive any emails.

I reassured him that I would check out his computer as soon as I got into the office. And I did just that. Everything seemed to be operating normally and I figured the problem was Greg’s Blackberry. I don’t know anything about Blackberries, so Greg was out of luck.

I busied myself with whatever needed to be done and also watched the Michael Jackson memorial online. Saw Queen Latifah and Smokey Robinson make speeches and also saw Stevie Wonder sing, Never Thought You’d Leave in Summer and They Won’t Go When I Go.

I left the office around 2:30, enjoyed a Saint Luis Rey cigar and walked over to Times Square where I watched the people watching a big CNN broadcast of the memorial service.

It was odd watching Usher sing with no sound, only subtitles. I didn’t mind though.

Times Square has two areas stretching a number of blocks of Broadway that are now pedestrian areas with folding beach chairs scattered about for mainly tourists to sit on. I wandered through the throngs, enjoying my cigar and headed to the bus terminal for the ride home. 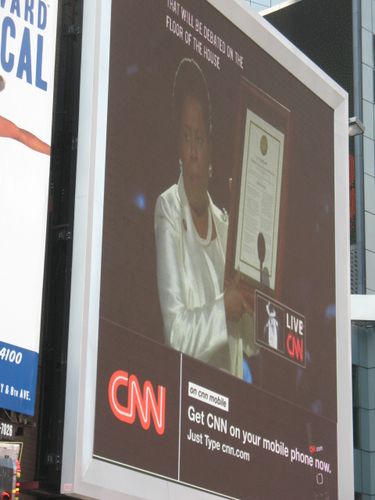 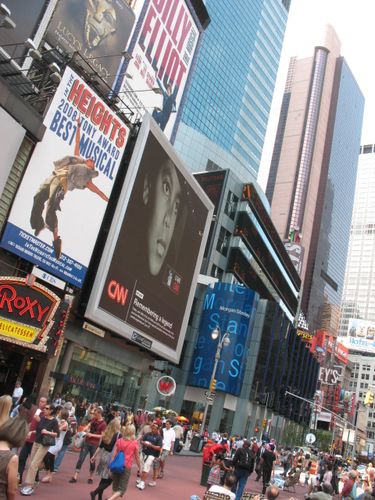 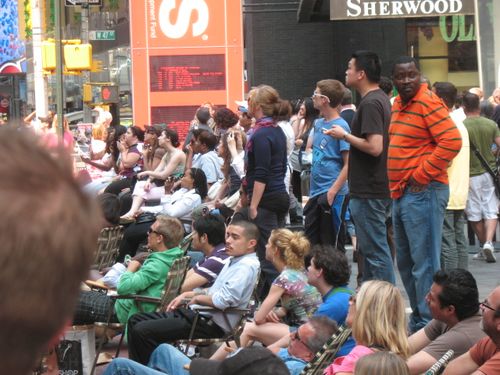 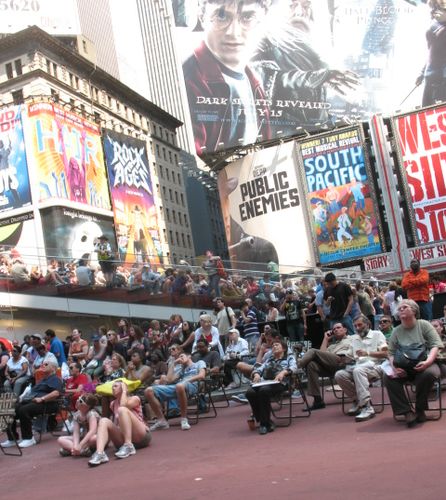 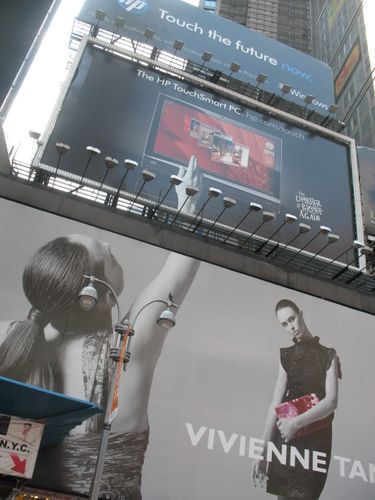