It’s a Friday and it’s been rather a ho hum Friday. Nothing much at all to report. The highpoint of the day so far has been laundry and that was over before noon. I saw Stine and gave her 3 copies of Architectural Digest which I’ve been receiving lately somehow.

I haven’t subscribed since I never even look at Architectural Digest in the newsstand, much less bring a copy home. It was all Stine, no Alexander. He was in the bedroom and Stine was hoping he would take a nap.

Today was a cloudy, gray day, always on the verge of raining, which it didn’t do until I went outside. I was prepared and carried an umbrella. I saw Martin Kelly where he works at CVS.

He told me he had been there since 5:00AM. I asked if he’s getting overtime and he’s not since he’s only working till 1:00PM. That’s the kind of day it’s been. I’m reporting on Martin Kelly’s day.

Today is Good Friday which is a big day in the catholic world I was brought up in. Stations of the Cross was a highlight. I was so enamored of the stories when I was growing up that for a few years I always expected the sky to go dark and the earth to shake around 3:00 which was the time I was told by my teachers that Jesus died on the cross.

Of course it never happened, they were just stories. For a couple of weeks before Holy Week at St Francis de Sales we had to go to church on Fridays and go through the Stations of the Cross. It usually took an hour or so to get from the start to the finish.

Always a drama and for an imaginative kid like myself I was entertained while repeating the lines along with the rest of my classmates. Despite all that, Easter was always a letdown. No ‘real’ presents to speak of. A suit jacket and some polyester slacks from Robert Hall usually and for me it was torture.

I certainly wasn’t one to dress nicely back then, remember this whole getting dressed up in a suit and tie is relatively new, at least for the past 10 years. 30 years or more I was just grumpy and had to be told to tuck in my shirt constantly.

Still my appearance was close enough to make my mother feel good.

The Saturday night before Easter was usually spent dyeing eggs using Paas egg coloring kits and rub on stickers. 2 baskets full of candy and chocolate and eggs would usually sit on the credenza for a week as the milk chocolate bunny gradually was nibbled and torn away by unseen culprits.

Photographs would be taken in front of the forsythia bush, me and my siblings and occasionally some neighborhood kids also dressed in Easter finery.

This year I am going with Bill to his church for Easter services.

I already know what I’m going to wear, now all I need is a forsythia bush. 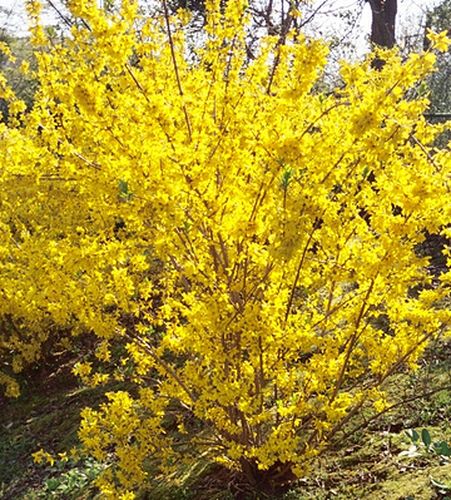 2 thoughts on “Friday I’m in Love”